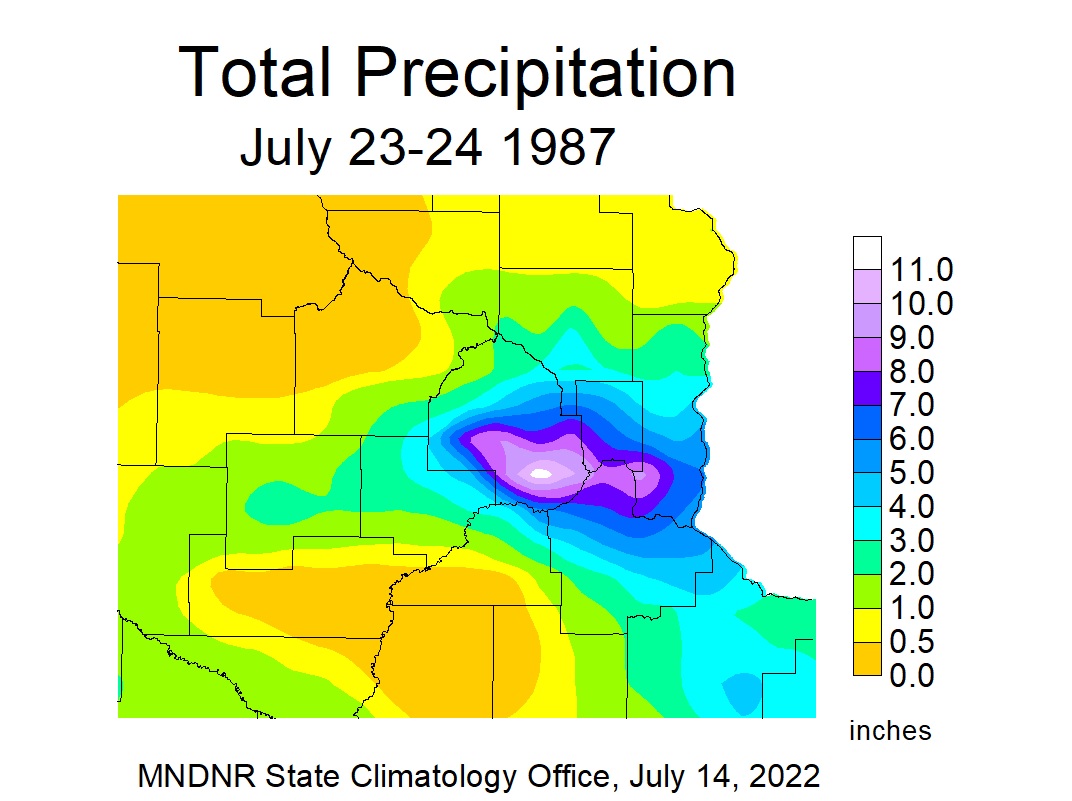 Map of rainfall totals from July 23-24, 1987, as reported by over 250 local rainfall observers. Note: the digital mapping and contouring process may lead to small errors in placement and magnitude of rainfall totals.
Map produced by the Minnesota State Climatology Office.

A highly localized and nearly stationary severe thunderstorm complex, barely larger than a typical Minnesota county, lashed the Twin Cities area for over eight hours on July 23-24, 1987, producing tornadoes, thunderstorm winds of 60-80 mph, and prolonged extreme rainfall rates that led to the most significant flash-flooding ever observed in the area. Indeed, the great Twin Cities "Superstorm" of July 1987 remains a statistical oddity, an undisputed local rainfall champion, and a generational weather event for those who experienced it.

When all storm activity subsided early on July 24th, parts of Maple Grove and Brooklyn Park lay flattened by tornado winds, local hills had turned into vicious cascades of excessive rain water, stretches of highways and interstates had become raging rivers, isolated homes from south Minneapolis to Eden Prairie had collapsed, thousands of basements were flooded, hundreds cars were stranded and submerged in deep water over dozens if not hundreds of linear miles of area roads, and residents stayed up late, dealing with the effects of a storm that had less than a 0.1% probability of occurring in any given year.

Tragically and also miraculously, the violent event resulted in two deaths, both related to flooding. A man in south Minneapolis drowned in his basement after being pinned there by his collapsed home, and a man in Hopkins died after his car was swept into Nine-Mile Creek.

The Superstorm had unusual origins as a tornado-producing supercell thunderstorm that formed right along a cool-air boundary left over from strong thunderstorms earlier in the afternoon over the northern Twin Cities. Temperatures in the cooler air remained in the 70s F, but temperatures across the central and southern Twin Cities climbed into the upper 80s and lower 90s, with muggy dew point temperatures above 70 F by early evening. This set the stage for highly localized, explosive thunderstorm development.

The main thunderstorm formed around 5 PM in Wright County, becoming severe with large hail by about 5:30 PM. The storm intensified and crawled eastward, while expanding as it ingested the tropical air mass to its south. By 6:40 PM, tornado sirens were blaring in the northwestern suburbs, and at 6:55 PM, a tornado struck Maple Grove, and then moved into Brooklyn Park, damaging dozens of homes in the two cities. This tornado was rated F-3, (on a scale from F-0 to F-5), tying it for the highest damage rating of year in Minnesota. Other funnels and tornadoes were sighted in Long Lake, St. Paul, and Edina during the evening, and Tornado Warnings continued within the Twin Cities area until 8:30 PM. The slow storm motion and the confirmed tornado activity led to concerns that a major tornado outbreak was about to spread over the most densely and heavily-populated part Minnesota. It was only during the final hour of the tornado warnings that extreme rainfall and flooding emerged as concerns.

The large storm was still quite severe, even after the tornado threat subsided, bringing waves of 60-80 mph winds and extraordinarily intense rains as it crept into new areas. By 9 PM, the storm had moved just 15 miles in three hours, and now extended from western Lake Minnetonka, through Minneapolis, and into St. Paul. New cells formed every 10-15 minutes on the western edge of the storm, quickly intensifying until they merged with the main cell. When viewed in time-lapse sequences, weather radars showed a very intense, nearly stationary storm struggling to move eastward, but then being reinforced almost constantly by new activity immediately to its west.

At the Minneapolis St. Paul airport, rainfall rates exceeded two inches per hour for three straight hours, leading to 3-hour totals between 8 and 11 PM of 7.58 inches. Another 2.42 inches fell through 2 AM, bringing the storm total to an even 10 inches, with 9.15 falling on the 23rd. Both the daily and storm-total rainfall were all-time records for the Twin Cities.

Other local observers had even more rain. A MnGage observer in Bloomington recorded 12.75 inches, and a dozen other observers from south Minneapolis to Minnetonka recorded over 10 inches. A similar, and only slightly smaller storm had struck just to the southwest of this one on July 20-21st, dropping 9.15 inches in Shakopee. Five-day totals between the two storms were 13-15 inches in Eden Prairie and western Bloomington.

The Superstorm's limited geographic range resulted in a tight gradient in rainfall totals, with the 6-inch contour roughly bound between Mound, Fridley, Roseville, Afton, and Apple Valley. Totals were under two inches in metro-area communities like Farmington, Prior Lake, Cologne, Rockford, and Ham Lake. Thus, despite the exceptional rainfall totals and the catastrophic damage, this storm was not expansive enough to qualify as a "mega-rain." Another major event in 2016 did not qualify either, and the State Climatology Office cautions users that flood susceptibility and impacts depend on far more than rainfall totals and geographic extent.