Even many years later, the Halloween Blizzard of 1991 remains one of Minnesota's signature extreme weather events, and stands as a benchmark against which other winter storms are compared. An odd combination of extreme intensity, duration, and timing--it was unusually early in the season, especially given its ferocity--make this one of the state's great historical blizzards.

With its scenes of stranded cars, pumpkins buried in snow drifts, and abandoned roads, those who experienced the Halloween Blizzard in 1991 won't soon forget it. The storm, like many significant moments in history, is one that people remember vividly, with adults and children alike at the time recalling where they were and what they were doing.

Referred to as the "Mega Storm" and the "Storm of the Century" at the time, this exceptional storm came as Minnesotans were still celebrating the Minnesota Twins second World Series win in just four years. After a spell of warm and pleasant weather, a cold front ushered in unseasonably cold air. The high temperature in the Twin Cities was 65 degrees on the 29th, over ten degrees above normal. On October 30th, the high temperature in the Twin Cities only reached 32 degrees.

By late evening of October 30th, meteorologists were becoming suspicious of a large storm building to the southwest (see text statements below), but were uncertain about the storm's path and how much precipitation it would bring. From the seasoned veterans at the National Weather Service, to students studying meteorology at St. Cloud State, it was clear that a large storm was coming, and bringing a large amount of precipitation. But what kind of precipitation would this large storm bring? If it was going to be mostly rain, as some early indications suggested, that would be in line with other strong late October and early November low-pressure systems. If it was going to be mostly snow, as was looking increasingly likely, forecasters figured it would be heavy and wet, and would probably mix with rain and sleet, keeping accumulations down. Nobody anticipated a record-setting snowstorm. 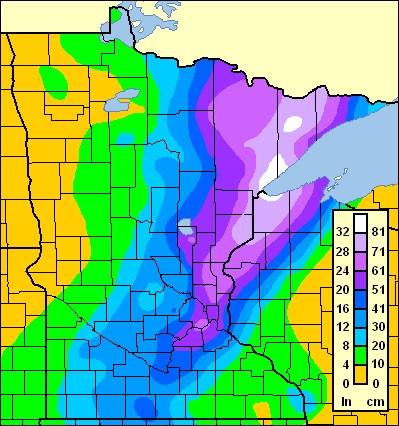 As Halloween dawned back in 1991, confidence had increased that much of the area would see snow and/or mixed precipitation, with the heaviest snow expected late in from the late on Thursday October 31st in Friday November 1st. Accordingly, the National Weather Service issued Winter Storm Watches at 4:00 am on the 31st, noting the potential for up to a foot of snow. Forecast totals would be revised constantly during the storm.

By mid-morning on Halloween, snow had begun spreading over southern and southeastern Minnesota, and hourly statements issued by the National Weather Service through the day indicated that a large and expanding mass of precipitation was taking over the southern 2/3 of Minnesota. The snow spread into the Twin Cities before noon, and would not let up appreciably for 24 hours-- it  would not stop altogether for almost two days! In any case, the arrival of accumulating snows six to ten hours ahead of schedule gave forecasters their first inkling that this storm was "over-achieving." The National Weather Service in the Twin Cities issued Winter Storm Warnings by late afternoon on the 31st, and forecasters now realized there was a potential for a lot of snow.

As the afternoon faded into evening a surreal scene unfolded with kids attempting to trick-or-treat wearing coats and boots and pumpkins becoming covered with a snowy blanket. The snow piled up steadily, and without much wind initially. By the end of Halloween, 8.2 inches of snow had accumulated at the Twin Cities International Airport, the most on record for the entire month of October (at the time; October 2020 broke the record).

The storm was just beginning. In fact, it may be remembered (proudly) as the Halloween Blizzard, but the worst of the storm, including the characteristics that made it a true blizzard, held off until November 1st.

By the morning of November 1st, the parent low-pressure area had intensified, and moved to southeast Iowa, with the snow reaching peak intensity in southern Minnesota and the Twin Cities between 4 Am and 9 AM, with over a foot on the ground before sunrise and a foot-and-half measured around 8 AM. The snow led to a flurry of cancellations. 900 schools and businesses closed in Minnesota including 3M, Dayton's, Honeywell and the Carlson Companies. Meanwhile in southern Minnesota and in Iowa, where the precipitation remained as rain, one to three inches of ice formed on surfaces. This was the costliest ice storm in Iowa's history through 1991. Snow removal became difficult as the snow had started falling on warm pavement, which melted at first and then froze into icy ruts that proved to be very difficult to remove. An additional 18.5 inches fell on November 1 at the Twin Cities International Airport, and snow blowers in the metro area quickly sold out.

The storm became a blizzard officially during the afternoon of November 1, as the low pressure center headed towards Lake Superior and intense winds gusting as high as 64 mph at Willmar spread across the state, whipping the snow into enormous drifts and dropping visibility to near zero. The National weather Service issued Blizzard Warnings for much of southern, central, and eastern Minnesota (including the Twin Cities), as winds increased and additional waves of accumulating snow moved in. Even though most of the accumulating snow had ended in the Twin Cities during the late evening of November 1st, it reached extreme intensity in the Arrowhead region and Duluth during that same time, as Lake Superior, the terrain, and bouts of thundersnow combined to produce some of the highest snowfall rates of the storm.

By November 2nd, the snow was winding down, but the storm's fierce winds ushered in a reinforcing push of cold air, forcing temperatures to fall into and through the teens across much of the state during the day. Cold air kept filtering in the proceeding days,  with a low of -3 F at the Twin Cities Airport on November 4, the earliest below-zero low on record, back to 1872.

Duluth wound up with 36.9 inches of snow from this storm, establishing a record as the largest single snowstorm total for Minnesota, until 46.5 inches fell from January 6-8, 1994 near Finland in Cook County. The storm total in the Twin Cities (at MSP) was 28.4 inches, establishing a single-storm snowfall record for that station.

Other final accumulations in Minnesota, many of which set storm-total records, included: 36 inches at Two Harbors; 32 inches at Brimson; 30 inches at Gunflint Lake and Eveleth; 25 inches at Lutsen, Cambridge, and Chaska; 21.8 inches at Hibbing; 20 inches at Young America, Litchfield, and Waseca; 17.4 inches at St. John's in Collegeville; and 17.3 inches at International Falls.

October Blizzards in Minnesota are rare, but they have happened in the past. The most severe early blizzard on record for Minnesota was the devastating October 16, 1880 storm. This storm left behind drifts of snow to 20 feet high in the Canby area and brought train traffic to a standstill over western Minnesota until the spring thaw. This winter is vividly portrayed in Laura Ingalls Wilder's Book: The Long Winter.

It should be noted that this was not the same storm that went on to be the "Perfect Storm" that was the basis of a book and movie. The two events actually occurred simulataneously, caused by separate, intense cyclones more that 1000 miles apart. In fact, on the national news at the time, this east coast "Halloween" storm was the lead weather story, and the Upper Midwest Halloween Storm was barely mentioned.

Below are some historical statements from the National Weather Service before, during, and after the event.