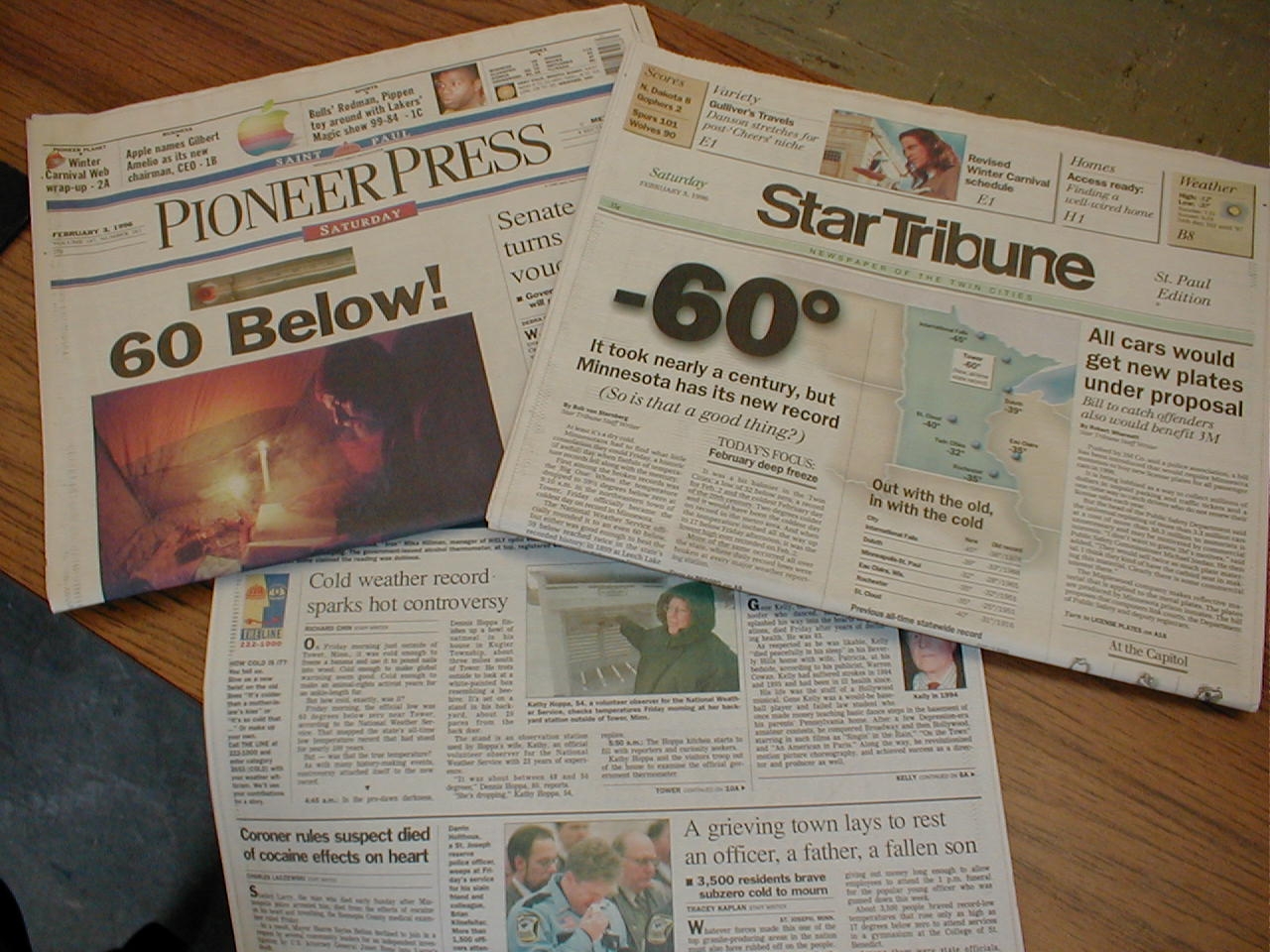 February 2,1996 was the coldest instrument-measured temperature on record for the state of Minnesota.

A location in St. Louis County, 3 miles south of Tower, recorded -60 degrees F on February 2, 1996. This value ties Minnesota with North Dakota for the all-time record low for a non-mountainous state.

But why Tower? Aside from the deeply cold air mass that had overspread the region, two factors likely contributed to the record-low temperature. First, Tower had 44 inches of snow on the ground. The height of the thermometer is normally about 5 feet above the ground, but with the deep snow, the "ground" was much closer to the thermometer. The coldest air tends to sink to the lowest possible level, which on this morning placed it very close to the thermometer. Additionally, the Tower site is situated in a slight topographic bowl, which allows cold air to drain in from nearby areas. As a result, Tower frequently records some of the lowest temperatures in the state.

The air mass that produced the record low at Tower also produced bitterly cold temperatures across the rest of Minnesota. The Twin Cities (at MSP airport) recorded -32 F, and has not recorded a temperature of -30 or colder since that time. International Falls bottomed out at -45 F, and Duluth's maximum temperature was only -21 F on February 2nd.

This cold snap was a record-breaker, but it was short-lived. Tower rebounded by an astounding 108 degrees in just six days, recording a high of 48 F on February 8th. The Twin Cities International Airport even reported thunder on that day. This extreme swing in temperatures exhibits the high variability of the Upper Midwest climate.

If you are wondering how our state-record low of -60 stacks up nationally, the all-time U.S. low is -80 degrees F, observed on January 23, 1971 at Prospect Creek, Alaska. In the contiguous U.S., Montana (-70 F), Wyoming (-66 F), and Colorado (-61 F) all have colder record lows than Minnesota. Along with North Dakota, Idaho also shares Minnesota's record-low temperature of -60 F. See here for more information on state records.