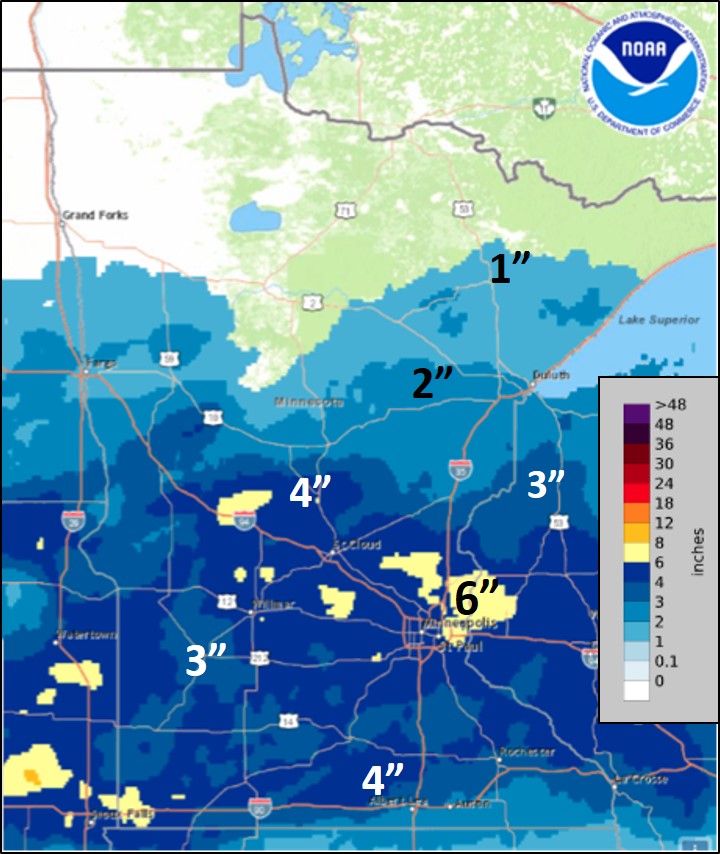 March began where February left off, with another widespread accumulating snowfall across Minnesota.

A small but potent weather system interacted with cold air over Minnesota to produce a 3-6 inches of snow over the southern 1/2 of the state, with accumulations of 1-3 inches up to US Highway 2 in northern parts of the state.

Light snow began on several different and sometimes oddly-shaped axes on the morning of Friday March 1st. The snow was intermittent and spotty at first, leading to generally light accumulations through 11 AM. As the day progressed, however, the areas of snow began to consolidate and intensify, and from late morning through late afternoon, many stations in southern Minnesota reported visibility under a half-mile. The snow ended by mid-afternoon in western Minnesota, and after dark in eastern parts of the state. Spinouts and accidents were common throughout the state, and Friday evening traffic slowed to a crawl in the Twin Cities yet again, with commutes taking 2-3 times longer than normal.

The storm produced accumulations of 4-6 inches along and either side of I-94, from the Alexandria area right into the Twin Cities. The official National Weather Service Cooperative observer near Carlos in Douglas County recorded the day's largest total, with 7.0 inches. Other totals included 6 inches at Kimball in Stearns County, 5.6 inches at the Twin Cities International Airport, 5 inches in Hastings, and 4 inches at Milaca. In the Twin Cities, this was the sixth calendar day snowfall in excess of four inches. This storm pushed the snow depth at the MSP airport to 21 inches--the first snow depth of 20 inches or greater this winter.