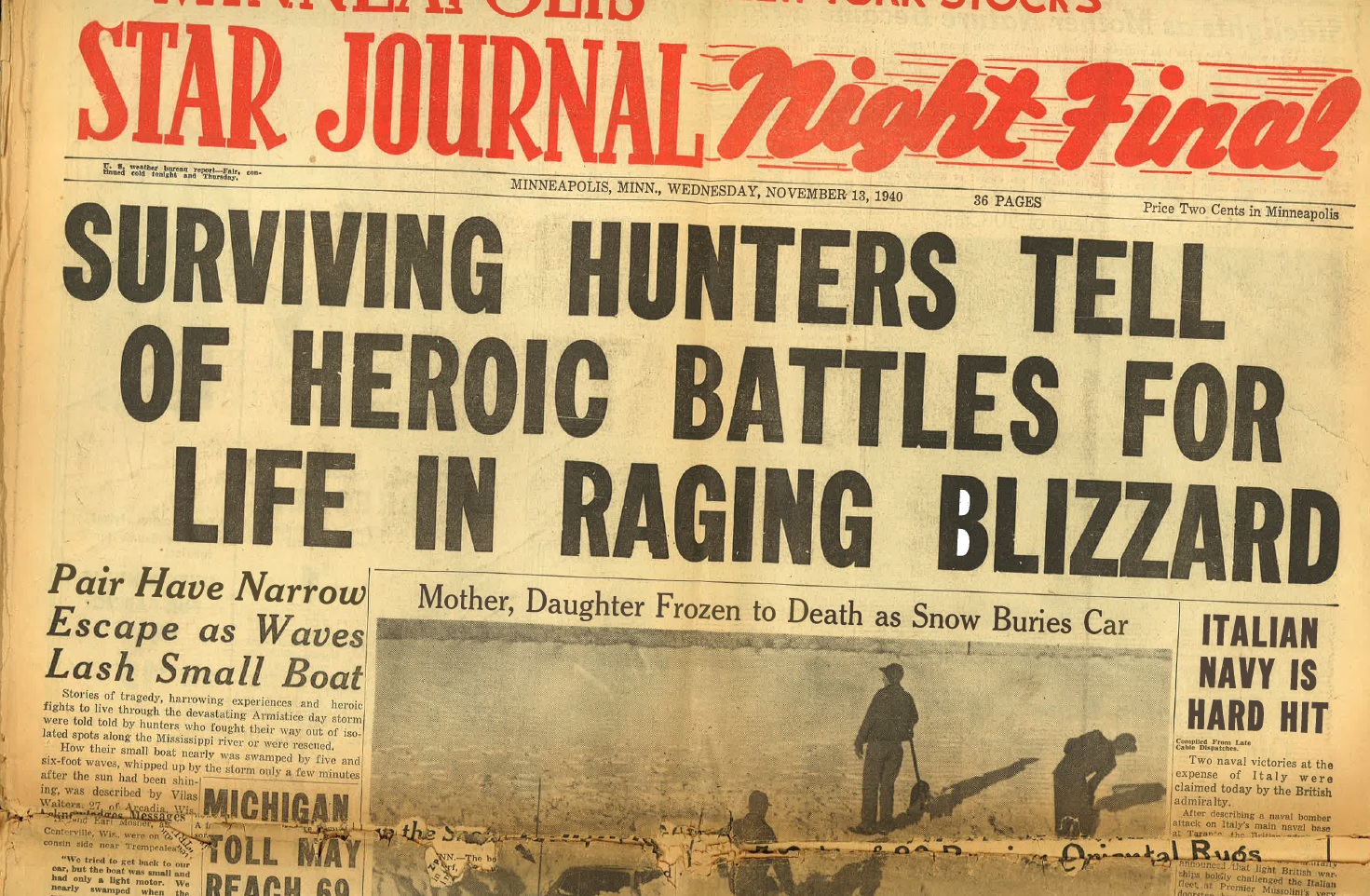 The Armistice Day Blizzard is the defining blizzard of the 20th century in Minnesota and remains the storm against which all other blizzards in this state are compared.

The storm began as a low pressure area over Colorado on the morning of November 10. The path of the storm would take it though La Crosse, Wisconsin on the 11th and then over Lake Superior by the 12th. The storm rapidly intensified as it moved northeast and caught many people off guard.

High temperatures in eastern Minnesota on Sunday, November 10th were mainly in the 40s with a 50 degree temperature at Winona. La Crosse was 52. In the Twin Cities, light rain began at dusk and continued through the night. The rain became steady, through the pre-dawn hours of Sunday, November 11. At 7am the air temperature on the roof of the Wold-Chamberlain Airport Terminal Building was 34 degrees and a visibility of 4 miles in light rain.

The Weather Bureau Daily Weather Map for 6:30am CST November 11, 1940 has the Armistice Day Storm over Iowa moving northeast.

The Weather Bureau forecast from Chicago for the morning of November 11 was for a "moderate cold wave warning". Chicago was the forecast office for Minnesota at that time. Shortly after 8am the rain began to change to a mixture of sleet, freezing rain and snow at the Twin Cities airport that continued for the rest of the morning coating trees and wires. The snow became heavy by lunchtime. Severe blowing and drifting snow quickly developed with winds that were sustained around 30 mph for the rest of the afternoon. The peak gust was 43 mph at 9:51pm. The visibility at the airport was zero to one eighth mile from noon until 11 pm. The temperature fell from 32 degrees at 8 am to 15 degrees by 3 pm.

The surface observations at the Twin Cities airport on November 11 show the how the weather deteriorated through the day.

Traffic by late afternoon in the Twin Cites was at a standstill and the result was that many people spent the night at their place of business in both downtown St. Paul and Minneapolis, or took refuge where they could. Hundreds of automobiles were abandoned, sometimes for days after the storm.

Train travel was severely hampered as well with a head-on train collision near Watkins that claimed two lives. Another train traveling from Fargo to the Twin Cities made it as far as Willmar and then got stuck just east of town Monday night. The train returned to Willmar to wait out the storm. The passengers crowded around a stove in the day car and rationed food. The train eventually reached the Twin Cities on Wednesday November 13, twenty-seven hours late.

The Armistice Day storm and another devastating Blizzard on March 14-15, 1941 prompted the Weather Bureau to refine the forecast regional responsibilities; Minnesota, formerly under the jurisdiction of Chicago office, acquired responsibilities to dictate its own forecasts and procedures.

Resources for further information on the Armistice Day Blizzard