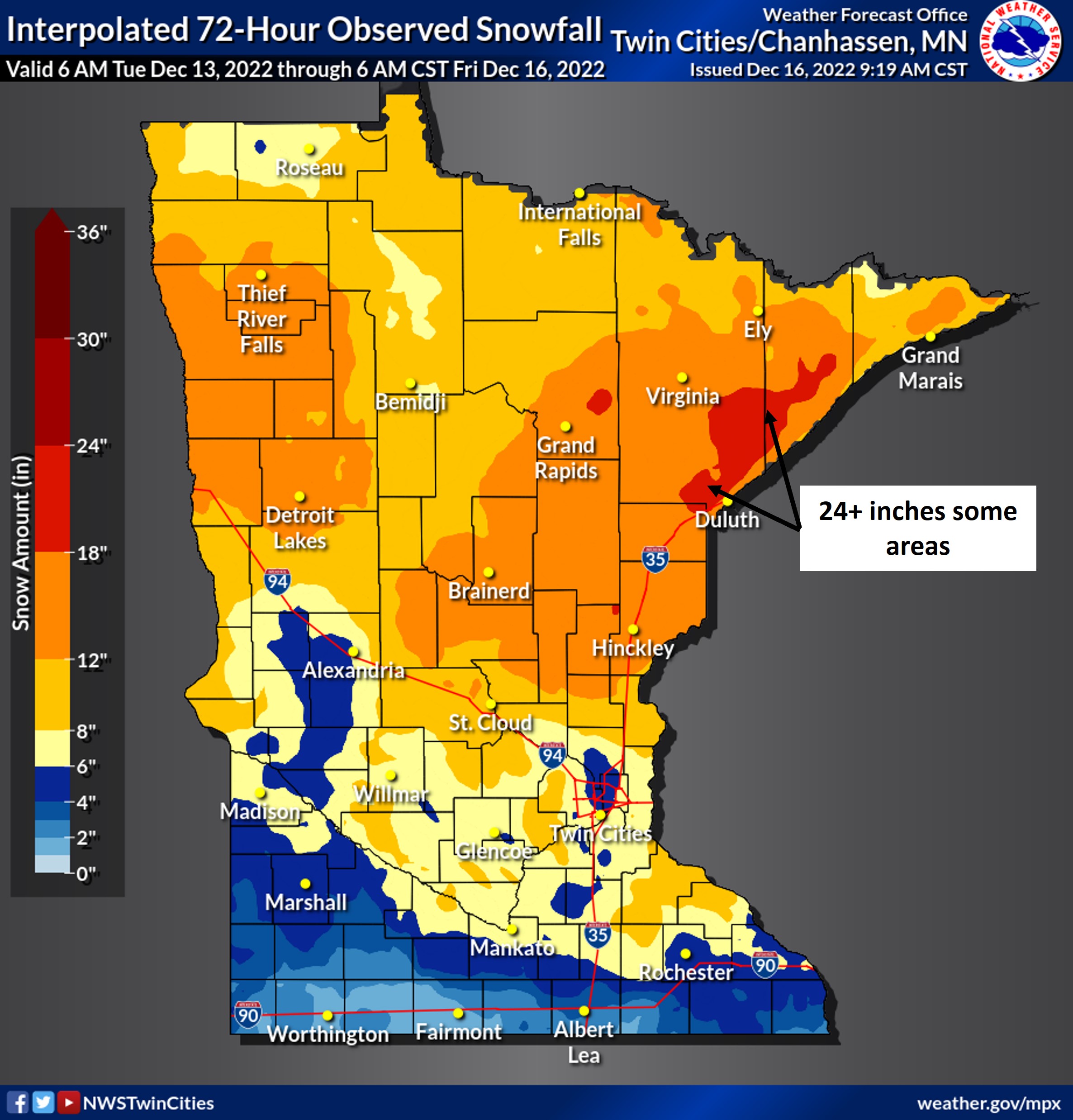 72-hour snowfall over Minnesota through Friday morning, December 16, 2022. Snow was ongoing in some areas when map was made. The mapping techniques tend to "smooth out" higher values, and isolated parts of far northeastern Minnesota received more than indicated.
Map courtesy of National Weather Service, Twin Cities/Chanhassen

A powerful and unusually damaging winter storm lasting multiple days brought wind, rain, heavy mixed precipitation, and intense wet snow to Minnesota from Tuesday December 13th, lasting into Saturday December 17th, 2022. Across the state, but especially in northern Minnesota, the storm damaged countless trees, blocked roads, closed snowmobile trails, and knocked out power to tens of thousands of customers. Its massive geographic footprint and duration meant that virtually all of the Dakotas, Minnesota, and Wisconsin received significant snowfall accumulations, with Winter Storm and even Blizzard Warnings covering the entire 300,000 square-mile area at times.

The storm featured two distinct waves, or phases, of significant precipitation, with additional waves of light and moderate snow as the storm weakened.

Phase one: Tuesday through Wednesday

The first phase of this storm came as a complicated pinwheel of freezing rain, sleet, rain, and slushy snow that spiraled slowly northward and eastward across the state from very early on Tuesday into Wednesday evening, as a strong low-pressure system chugged into Nebraska and drifted eastward across Iowa. Freezing rain greeted residents of southwestern Minnesota with a medium-thick glaze of ice early on Tuesday, and over the next 36 hours, many areas in western, central and northern Minnesota had accumulations of ice up to a third of an inch thick, topped off by heavy, wet snow. Mostly rain fell in southern and eastern Minnesota, although a burst of heavy accumulating slush in the morning on Wednesday slicked up streets and sidewalks too. 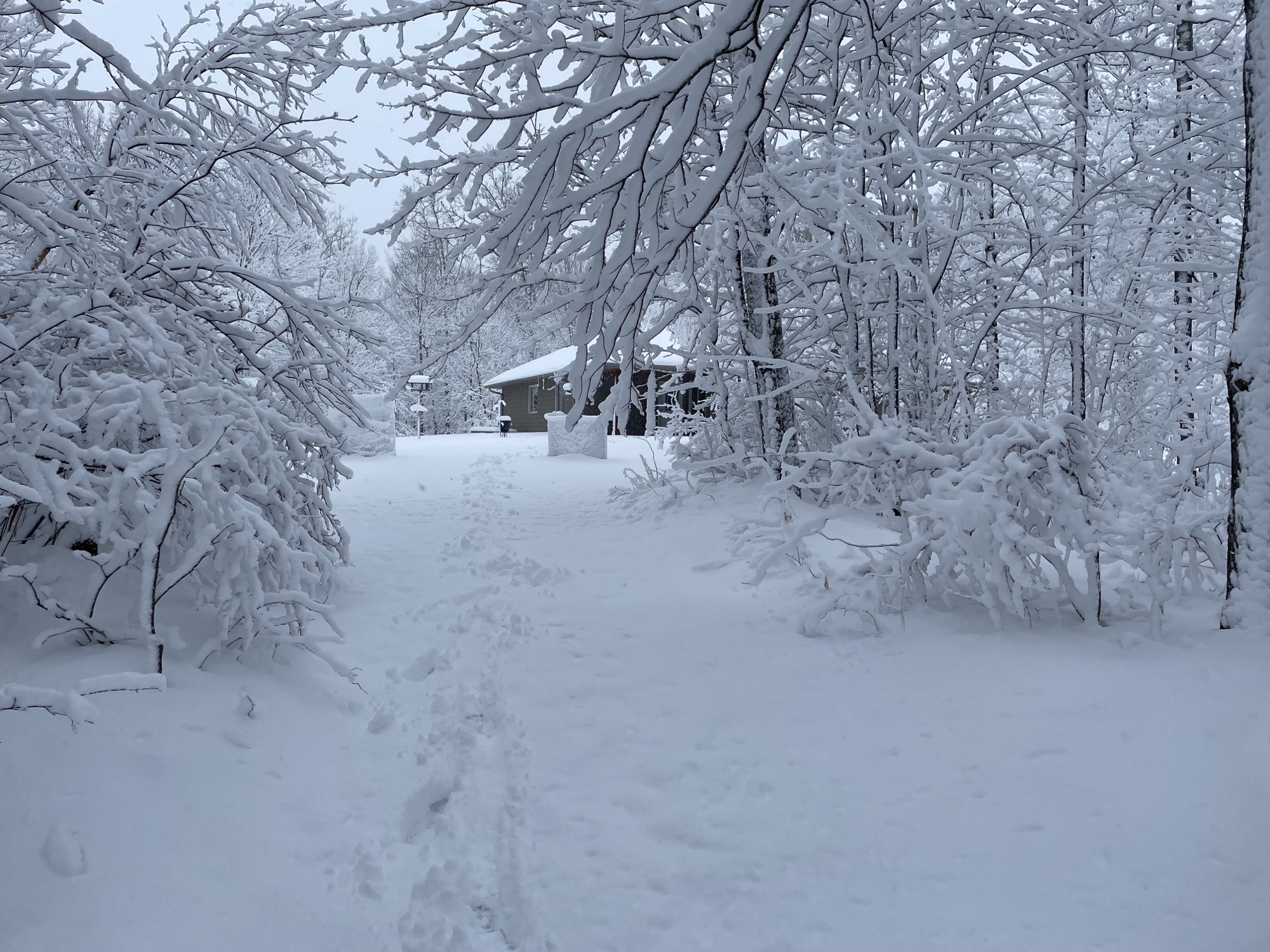 A scene of heavy, wet snow blanketing everything near Cohasset on the morning of Wednesday December 14,2022. Additional heavy snow fell on Thursday.
Courtesy C. Zeppelin

In central and northern Minnesota, the wintry precipitation was at its heaviest, with many areas receiving 4-8 inches of sticky, "cement-mixer" snow that clung to almost all surfaces. The high water content of this concoction, often on top of ice accumulations, overwhelmed some tree limbs, which then fell onto powerlines, knocking out power for customers in Pine County on and neighboring areas of east-central Minnesota on Wednesday. Strong easterly winds off of Lake Superior enhanced the already-heavy precipitation near and inland from the north shore, with lightning and thunder accompanying wind-driven waves of heavy snow in and around Duluth on Wednesday morning. The winds and heavy snow produced blizzard conditions along the north shore, where many communities reported 10-18 inches of accumulation by the end of Wednesday. Communities east of Grand Forks and around Grand Rapids also reported accumulations of a foot or more through Wednesday.

The second wave of significant precipitation formed as the low pressure center, by then in Wisconsin, ingested a surge of moisture and energy from the south, causing the precipitation to intensify dramatically and expand westward into Minnesota around and just after midnight on Thursday. Although it began as rain or sleet, this precipitation quickly turned into a massive band of heavy and wet snow, this time blanketing most of Minnesota through Thursday morning. By afternoon, the majority of the snow had fallen in most areas, although scattered bands of light to moderate snow kept circulating over some areas.

This second phase once again produced a wet, sticky snow, and even just a few inches of it was enough to take down small limbs and branches across the Twin Cities area through much of southern Minnesota. The snow was heaviest again in the northern half of Minnesota, where additional accumulations of 4-8 inches were common. The easterly winds continuing off of Lake Superior produced additional bands of intense snow that raked the Duluth area, much of the north shore, and the parts of the Iron Range through Thursday morning before giving way to intermittent snow showers. Additional accumulations of 8-14 inches were common in these areas through Thursday. Large tree limbs snapped under the load from the heavier snow in northern and northeastern Minnesota, and power utilities in east-central, northern, and northeastern Minnesota reported over 45 thousand outages as of early Thursday afternoon. It is possible that up to 100 thousand customers lost power at some point during the storm. 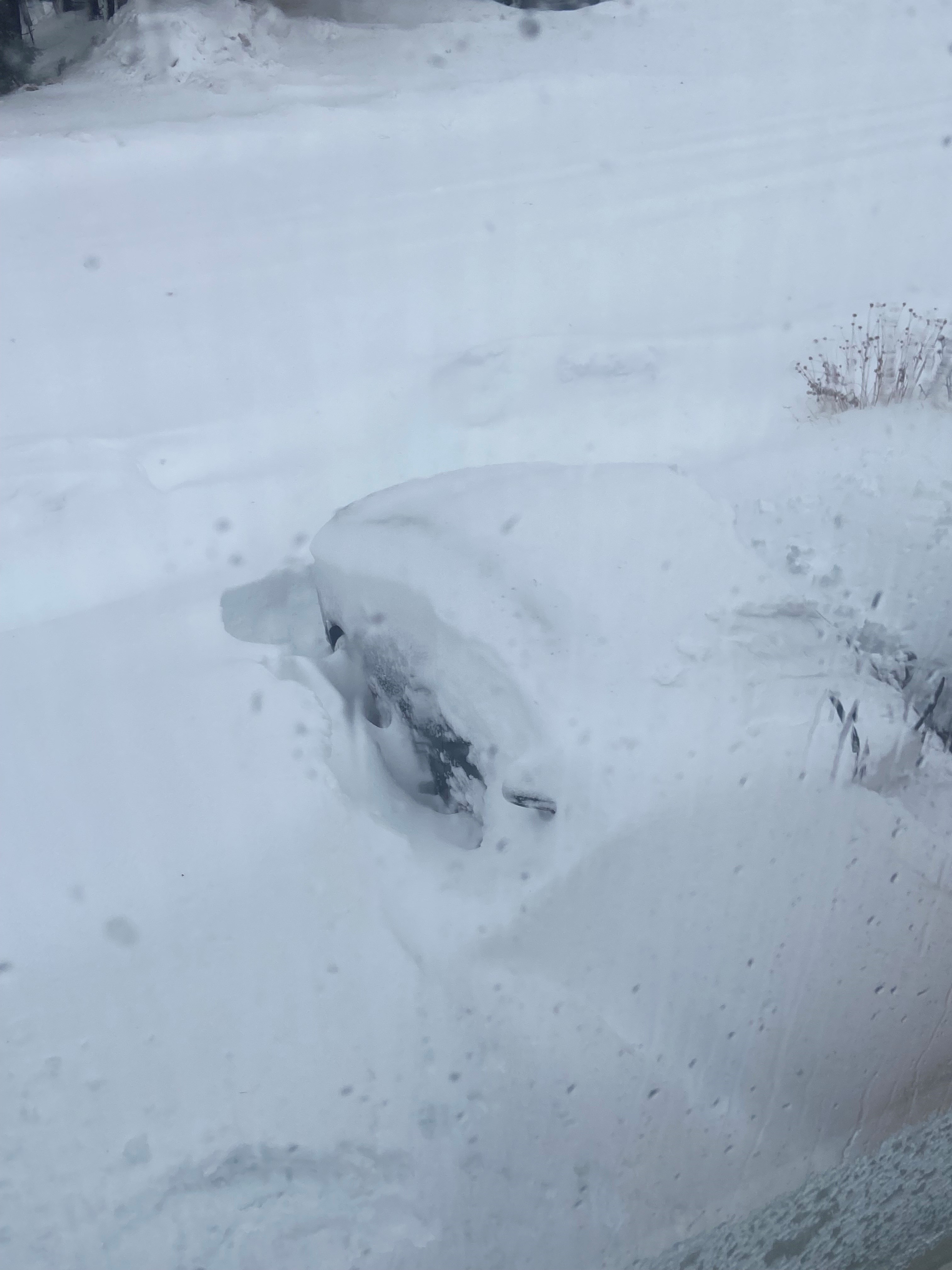 A car buried in the heavy snow on Thursday December 15,2022.
Courtesy J. McDonnell

Although the "main event" (the double-header of heavy precipitation) tapered off in most areas by Thursday afternoon, the center of low pressure continued wobbling over Minnesota and Wisconsin through Saturday, with bands of light to moderate snow rotating around it, affecting different parts of Minnesota.

Snow fell right through Saturday December 17th in southern, eastern, and northeastern Minnesota. Thus, the storm encompassed five full days. Although the heaviest snow fell from late Tuesday into Wednesday, and then again on Thursday, significant accumulations occurred in some areas on Friday and Saturday also. Duluth, for example, recorded over 7 inches of accumulation on those two days.

Snowfall totals for the storm were out of proportion with typical winter storms. The "light" side of the accumulating snows covered the southern third of Minnesota, with totals ranging from 3 to 8 inches. North of that area, accumulations ramped up into the double-digits quickly, and totals of a foot or more were widespread, Numerous observers throughout Itasca, St. Louis, Lake, and Cook counties reports 18 inches of snow or more.

The highest totals reported by official National Weather Service cooperative observers in Minnesota included 32.8 inches to the northwest of Two Harbors, 30.3 inches in Duluth, 28.3 inches at the Wolf Ridge Environmental Learning Center, and 26.9 inches near Brimson. Observations within the CoCoRaHS network included 40 inches near Finland, 34.5 and 33.6 inches southwest of Duluth, and 33.5 inches outside of Two Harbors.

Other totals around Minnesota included 12.4 inches at St. Cloud, 11.8 inches at International Falls, 8 inches in the Twin Cities, and 6.1 inches at Rochester. 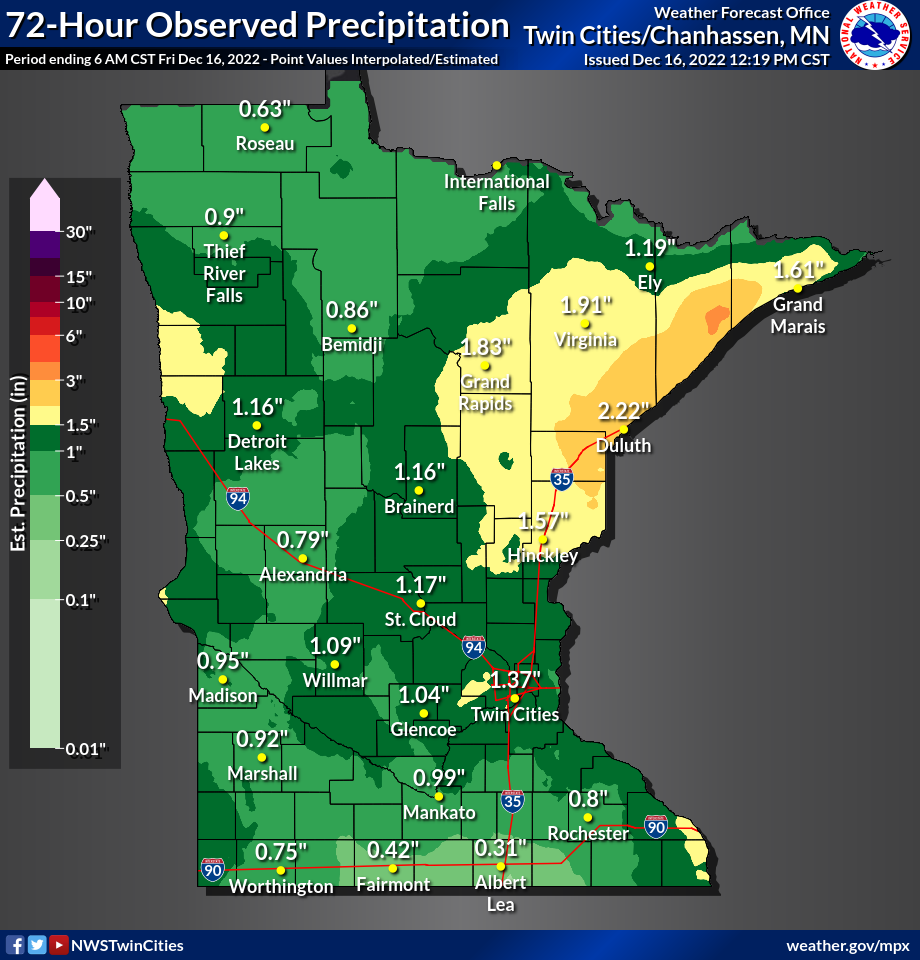 72-hour precipitation totals over Minnesota through Friday morning, December 16, 2022. Snow was ongoing in some areas when map was made, meaning precipitation values will increase in some areas. The mapping techniques tend to "smooth out" higher values, so some areas may have received more precipitation than indicated.
Map courtesy of National Weather Service, Twin Cities/Chanhassen

Although the snowfall amounts in this storm have been topped by other winter storms, it is unclear if any winter storm on record has produced so much damage to so many trees, over such a wide area. The high water content of the snow, in addition to ice that fell earlier in some areas, produced an unusual "loading" burden,  leading to exceptionally widespread tree damage and power outages. Trees and limbs were broken or "bowing to the ground" all over the state, but especially in areas that received over 10 inches of snow. In general, the higher the snowfall totals, the greater the damage to trees. A combination of photographic documentation, witness accounts, and other anecdotes, suggest this winter storm stands out as producing a unique degree of injury and mortality to Minnesota's forests. 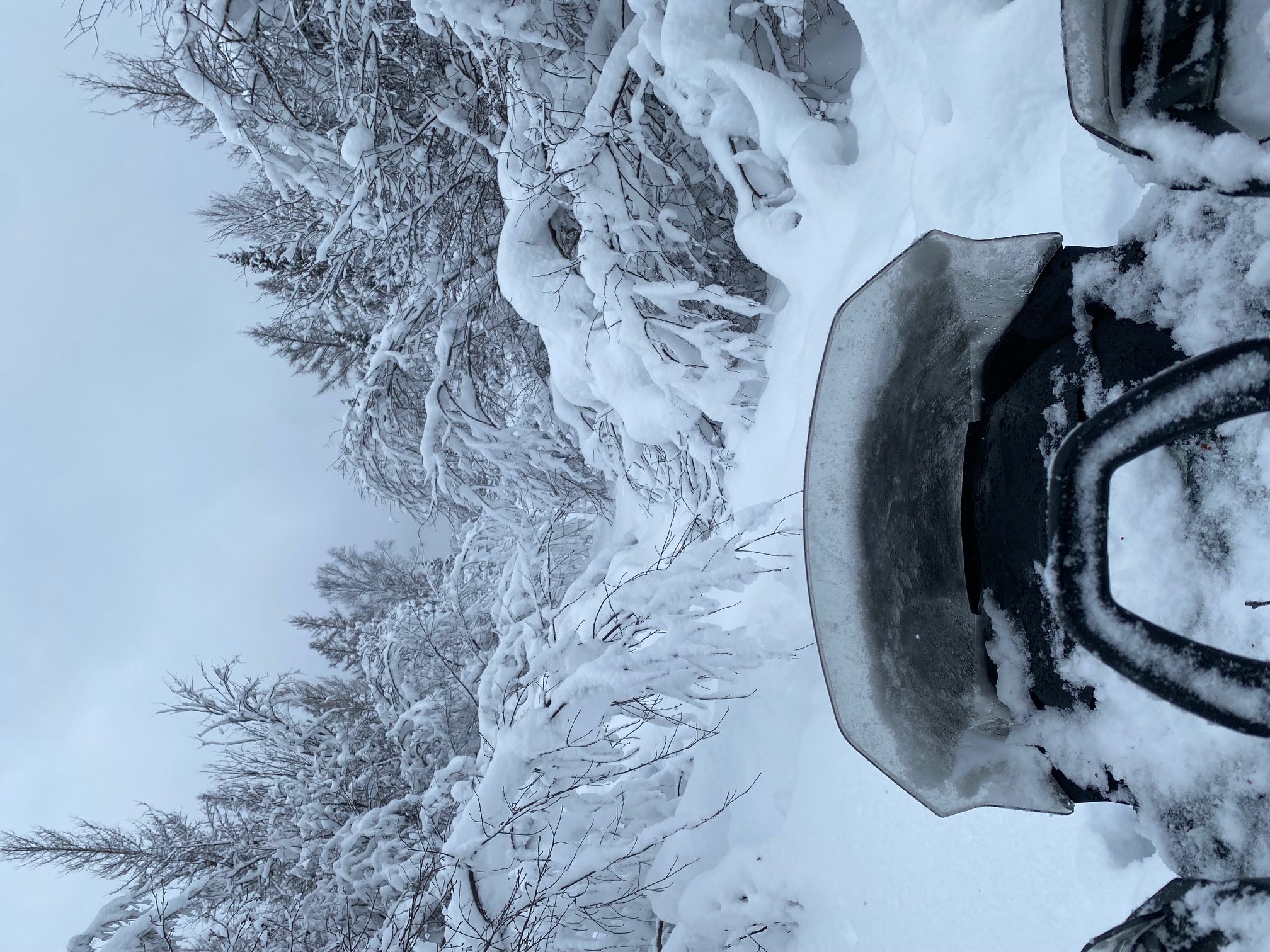 Deep, damaging snow, forcing trees to "bow" towards the ground and break, as seen from the Yukon Trail outside of Two Harbors.
Courtesy P. Goff

At first glance, the amount of tree damage may seem negligible compared to thunderstorm "blowdown" events that can wipe out entire swaths of forest covering tens if not hundreds of square miles. After all, this winter storm appears to have harmed only a fraction of all trees in any given area. On the other hand, reports from foresters, citizens, landowners, and recreationists indicate that over the northern half of the state, the storm damaged a fraction of all trees in most, or nearly all areas. In other words, any given area may not have had an exceptional amount of tree damage, but when added up across the nearly 18 million acres of forested land in Minnesota, the scope of damage appears historically large. It will take months and years to understand the true toll of this winter storm on Minnesota's trees, but it is certainly one of the most destructive winter storms in the last several decades.

The widespread tree damage also led to power outages, as fallen trees and limbs trees hit wires. Additionally, the fallen trees and limbs were strewn across and alongside many roads, highways, and even interstate highway segments. The downed trees and limbs prompted closure of some DNR trails, partially out of concerns that the deep snow would conceal large debris, leading to dangerous conditions for skiers and those on snowmobiles. The weight of the snow also was unusually difficult to clear, and some snow removal services required more powerful equipment to clear driveways, roads, and parking areas, particularly in northeastern Minnesota.

The State Climatology Office thanks the numerous Minnesotans who collect weather data as volunteer observers, and those who have shared their photos and stories from this storm.