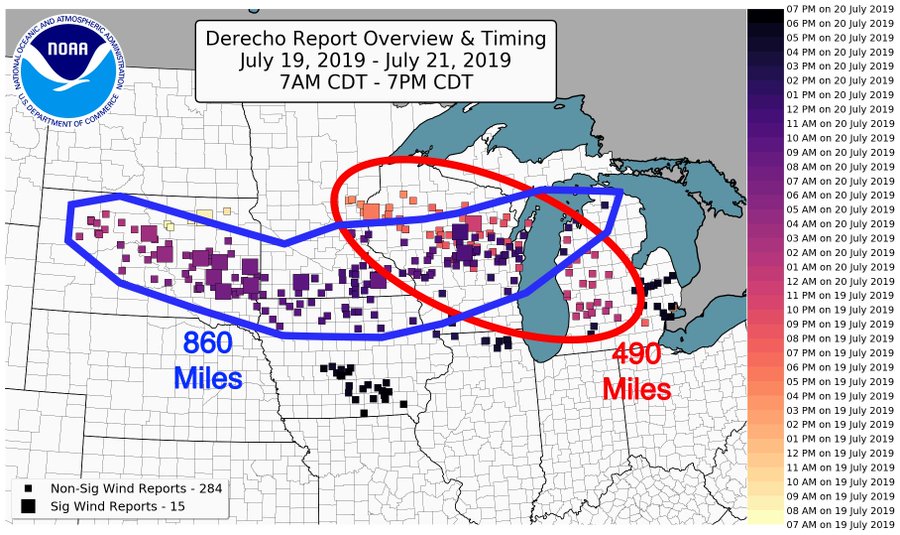 Although the heat had broken, moisture remained across much of Minnesota on Saturday, and storms re-formed in the morning in the morning along and behind the cold front that had past through the region the day before. Over most areas, these storms led to more heavy rainfall, but in southern Minnesota, intense winds accompanied the thunderstorms as additional waves of wind-damage-producing storms tracked from South Dakota into Wisconsin. The Windom municipal airport recorded a wind gust of 75 mph, a fire weather station near Pipestone recorded 71 mph, the airport in Crystal clocked a 68 mph gust, with 64 mph observed at Fairmont.

Rather than a single line of thunderstorms sweeping across the area producing wind damage along its path, this event was composed of several different thunderstorm clusters and lines, each of which had wind damage potential. For instance, between 8 and 9 AM, wind damage was reported in the western Twin Cities area, in the Pipestone area 175 miles to the southwest, and 200+ miles east of there, near Rochester. These concurrent bouts of wind damage arose from distinct clusters and lines of thunderstorms, that together produced a progressive, nearly continuous swath of damage hundreds of miles long. In Wisconsin, the swath of damage overlapped with the extreme damage swath from the previous night's storms.

As with the day before, this damaging thunderstorm wind event appears to fit the definition of a derecho (pronounced "deh-rey-cho"), because it produced a nearly continuous swath of damage reports exceeding 250 miles in length.