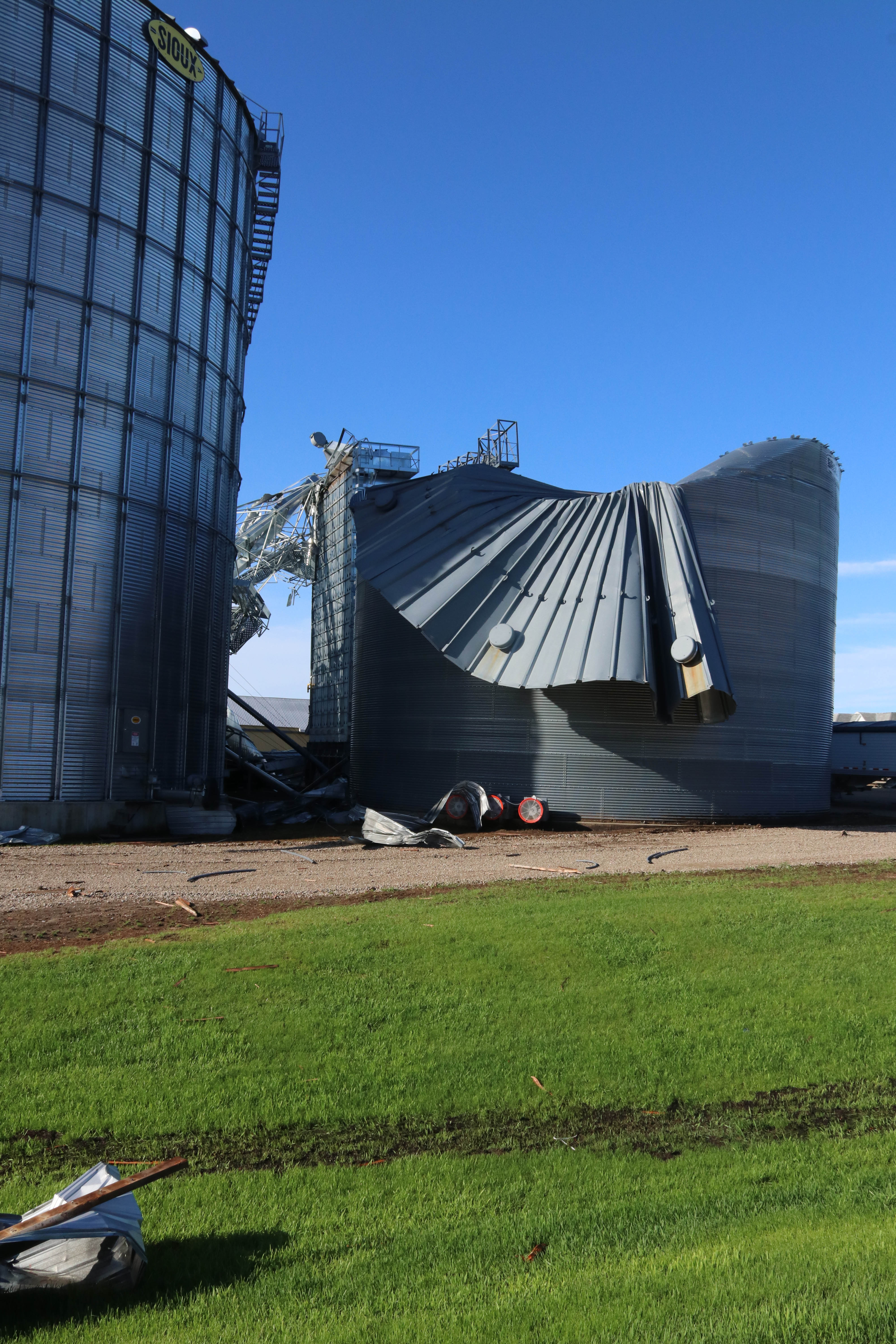 Update June 28, 2020. Please note: this story will be updated periodically until all surveys and assessments are complete. All counts of damage or harm to humans should be considered preliminary and potentially out of date until this tag is removed.

Some of the most extreme thunderstorm winds in years raked southwestern and western Minnesota on Thursday May 12, 2022, causing extensive damage to trees, structures and vehicles, The storms produced one fatality in Minnesota, and one in nearby Sioux Falls, South Dakota.

After another morning of isolated hailstorms, and following severe weather double-headers on Monday and Wednesday, a new and exceptionally potent batch of storms formed in a volatile air mass, as record-breaking heat and humidity gripped areas from southern Minnesota on south and west. As strong low-pressure system developed in Colorado and moved north-northeastward toward the North Dakota/Canada border, intense thunderstorms formed ahead of it in southern Nebraska, fanning into an arc-shaped complex that raced northeastward at 60-80 mph and required just six hours to reach the Brainerd Lakes area.

As the storms formed, the Storm Prediction Center issued an unusual "Particularly Dangerous Situation" (or PDS) Watch for Severe Thunderstorms, highlighting the potential for wind gusts up to 105 mph. The storms delivered on this threat, with wind gusts reaching 107 and 102 mph in South Dakota.

The storms entered the southwestern corner of Minnesota just after 5 PM, moving north and northeast with blasts of strong winds that swept quickly across virtually all of southwestern and western Minnesota. Though it will be impossible to verify, all evidence suggests that wind gusts of at least 60 mph affected the entire area from US Highway 71 westward to the border with the Dakotas, and extending from the Iowa border, northward past Interstate 94 to Highway 10, with isolated to scattered areas to the east also affected. This is an unusally large area to be affected by damaging thunderstorm winds, and does not include the large areal extensions into Nebraska, South Dakota, and Iowa.

Within the area of (nearly) continuous 60 mph wind gusts, pockets of extreme winds, often well in excess of the 74 mph threshold used to define hurricanes, streaked northward and northeastward. Measured gusts included 94 mph at Madison and Verndale; 87 mph at  Forada; 85 mph near Dalton; 81 mph at Taunton, 80 mph at Florence, Artichoke, and Trosky; 79 mph at Graceville; 78 mph at Marshall; and 75 mph at Canby. Stronger wind gusts almost certainly occurred in between wind sensors, and National Weather Service teams were surveying the damage and to understand the scope of the storms and the likely ranges of wind speeds.

The 94 mph wind gusts recorded at two locations were the highest measured gusts in Minnesota since July 6, 2014, when a sensor at Browns Valley recorded a 98 mph gust.

The storms produced 9 confirmed tornadoes in Minnesota (as of June 1), generally between 6 and 9 PM, and scattered in a southwest-to-northeast arc from far western into central Minnesota near Madison and Dumont, to Alexandria, to Cushing along US Highway 10 northwest of Little Falls. These tornadoes all were rated either EF-1 or EF-0, with estimated peak winds of 80 - 105 mph. None of the tornadoes had a path length greater than five miles, and given forward speeds of over 60 mph, most were on the ground for just a few minutes.

In most tornadic storms, the tornado damage is clear and easy to identify, but these tornadoes were embedded within intense, damage-producing winds, making it difficult to delineate tornado-specific damages from those caused by thunderstorm winds. For instance, the 94 mph wind gust recorded at the Madison, MN airport was NOT considered by the National Weather Service to have been caused by the tornado that struck the eastern side of town about 1-2 minutes later.

Damage from the thunderstorm winds and tornadoes was extensive and difficult to summarize concisely. The winds damaged silos, grain bins, and other agricultural structures severely. A man was killed on his own property when winds estimated to 90 mph blew a large grain bin onto his vehicle. The winds also blew over semi trucks on I-94, caused structural damage to homes and garages, damaged hangars, snapped power poles, snapped and uprooted trees, and knocked out power to tens of thousands of customers.

The extreme thunderstorm winds came on the heels of what had already been an active day, as morning and afternoon storms produced large hail for the third day this week. St. Cloud was hit repeatedly during the mid-day, and then was hit with 60 mph winds during the evening.

The day's storms also produced intense rains again, with a swath from from Willmar and Morris, northeastward to Grand Portage and International Falls receiving 1-2 inches of rain. Areas in central Minnesota near St. Cloud and Little Falls received 2-3 inches of rain. Additional heavy rains fell in northwestern Minnesota. Rainfall totals from Monday through Friday morning were 4 to 7 inches from the Granite Falls area through Lake Mille Lacs, with totals of at least two inches common over about 60% of the state. Northern Minnesota, which has been particularly wet, saw lake and stream levels rise, with flash-flooding reported along and near the north shore of Lake Superior.