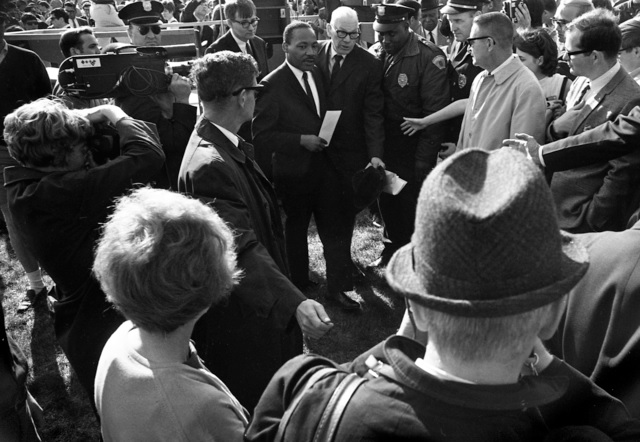 Dr. Martin Luther King Jr. made at least three trips to Minnesota. In 1957 he preached at Gloria Dei Luthern Chrich in St Paul, In 1961 he gave a speech in Mankato, and on April 27, 1967 Dr. King gave a speech at the U of M St. Paul Campus in front of Coffey Hall. As it turns out, it was one of the more pleasant days weather-wise in that April.

At this time, the University of Minnesota St. Paul Campus Climate Station, under the direction of Dr. Don Baker, took extensive daily weather observations, including temperature, precipitation, solar radiation and the rate of the spring “green up.”

Dr. King delivered an outdoor speech in front of 4,000 people, many of whom were sitting on the grass on the lawn (Dr. Baker noted that 80% of the grass was green by this date.) The weather in late April can be a challenge to outdoor activities, but in this case the weather cooperated. The high temperature 59 degrees at the St. Paul Campus Weather Station. Adding to the pleasant day, the solar radiation instrument at the station noted that April 27 happened to be the sunniest day of the month.

Many students at the time were concerned about the Vietnam War and there were “Make Love Not War” signs at the event. Dr. King garnered applause for his anti-war comments and ended the speech with “free at last” to a standing ovation.