Animation from Chanhassen radar on March 10, 2021.
Courtesy: College of DuPage

A wild springtime storm system brought vivid lightning and some of the earliest large hail on record to parts of southern Minnesota, while blanketing central and northeastern portions of the state with 6-12 inches of snow.

The seasonally-conflicted weather came on the heels of strong early-spring warmth. Stations across the state had broken high temperature records on Tuesday March 9th.

By Wednesday morning, a weak stationary front was draped southwest-to-northeast across the state, and a low pressure system began intensifying and moving along the temperature boundary, allowing warm and moist air to surge ahead of it, as temperatures fell across central and northern Minnesota.

Rain with embedded thunderstorms paraded northward across the state in waves during the morning and early afternoon. By late afternoon, a pocket of relatively warm and humid air, with temperatures into the 60s and dew points into the upper 50s F, advanced into the southeastern quarter of the state. With very cold air aloft and a powerful jet stream, the conditions at the surface became unusually unstable and conducive to severe weather for early March in Minnesota. The Storm Prediction Center issued a Tornado Watch for the late afternoon and evening hours over southeastern Minnesota. Despite a few warnings, the storms produced no confirmed tornadoes.

The storms did, however, produce a swath of large hail, particularly in the southeastern Twin Cities area, over Dakota and Washington Counties. The National Weather Service received reports ping pong ball to tennis ball-sized hail (1.5" to 2.5" diameter) from Rosemount, to South St. Paul and Inver Grove Heights.  Although large hail did fall on March 6, 2017, in association with Minnesota's earliest tornadoes on record, the tennis ball-sized hail reported in Inver Grove Heights on March 10, 2021, appears to be the largest hailstone on record to have occurred so early in the season. 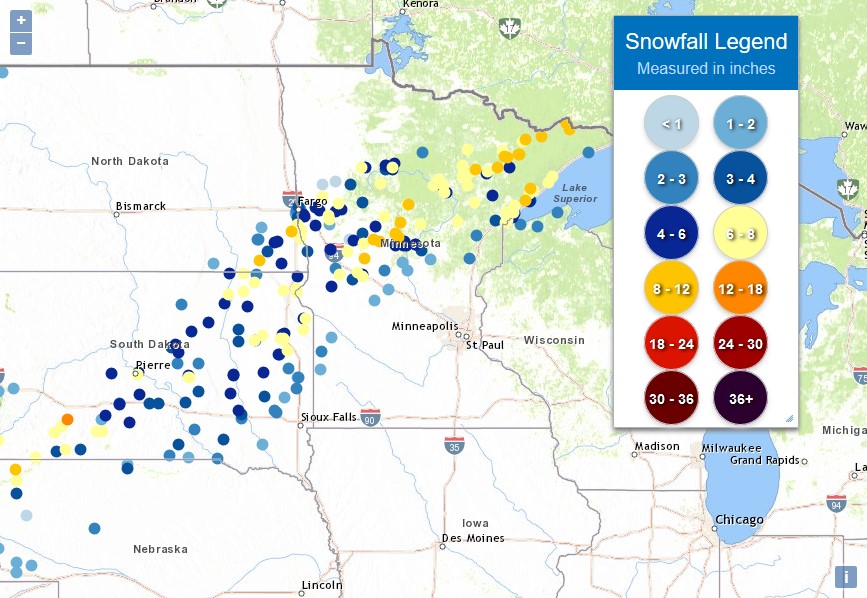 While strong thunderstorms were battering parts of southern Minnesota, a band of heavy snow began developing in the Fargo-Moorhead area. The snow produced low visibility and poor travel conditions across much of west-central and northern Minnesota during the afternoon, and then pivoted into the Minnesota Arrowhead, where it was reinforced by the northward-lifting remnant moisture that had been associated with the southern Minnesota thunderstorms. The snow fell hard during the evening and overnight, with some noting the odd state of "pouring snow" in the Two Harbors area.

Snowfall totals in excess of six inches stretched in a southwest-to-northeast band, from Alexandria and Detroit Lakes, to the Boundary Waters and north shore of Lake Superior. Snowbank Lake east of Ely reported the highest total, with 11.9 inches, followed by 11.6 inches near Pine River, and an even 11 inches at Gunflint Lake. The Duluth National Weather Service reported a storm total of 7.1 inches.

The weather system produced important and much-needed precipitation as well. The entire state has been at least Abnormally Dry (an entry-level designation on the US Drought Monitor), with about 40% of state, designated in Moderate Drought. Precipitation totals of one-half to one inch helped many areas stave off additional moisture deficits, although far northwestern Minnesota missed out on the precipitation completely.