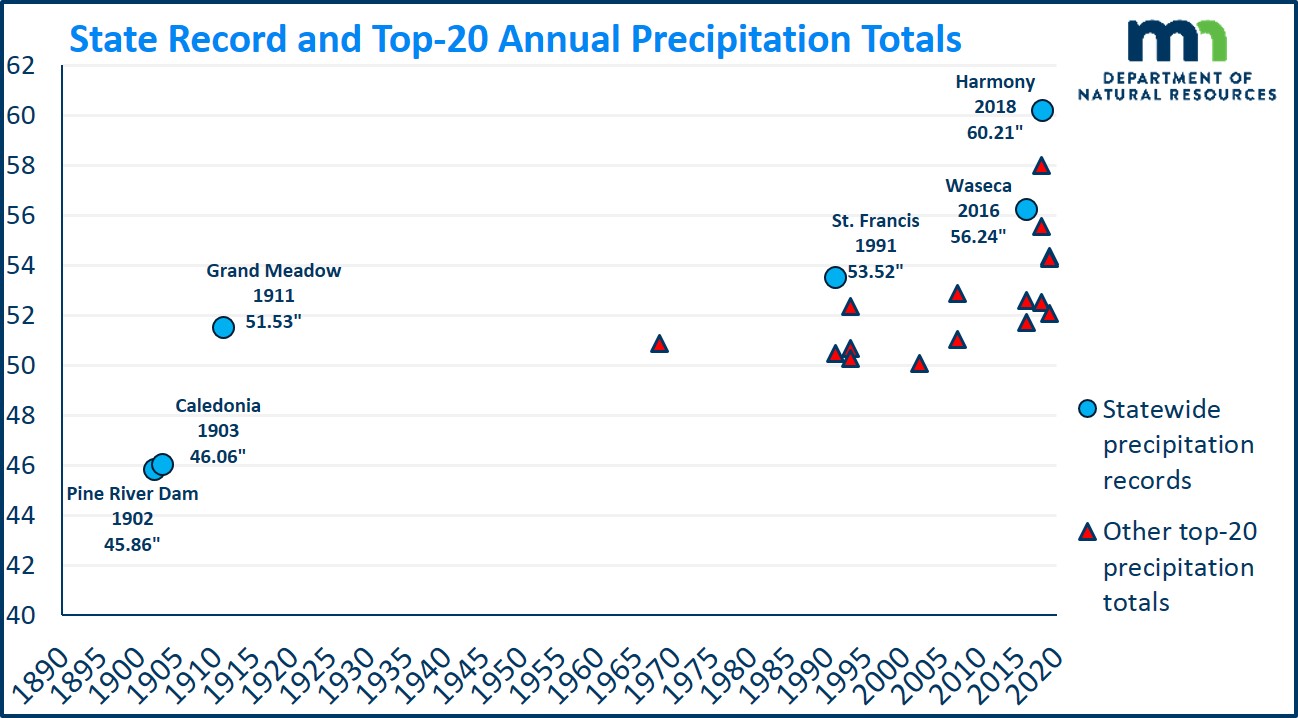 In 2018, the official weather observer at Harmony (far southeastern Minnesota) recorded 60.21 inches of precipitation, which is the highest annual total for any National Weather Service Cooperative Observation site in Minnesota since record-keeping began.

Records indeed are meant to be broken, but breaking and re-breaking precipitation records in such rapid and dramatic fashion is unusual. All-time statewide records tend to be quite durable, and get broken only by small margins. Note that many of Minnesota's documented climate extremes are decades old. When the all-time daily minimum temperature record of -60F was set on Feb 2, 1996 at Tower, it beat the old record by one degree, and technically, by tenths of a degree.

The precipitation records, however, have exhibited much more "aggressive" behavior, reflecting the remarkable wet regime in which much of Minnesota has found itself recently. Before 1991, no station in Minnesota had recorded more than the 51.53 inches recorded at Grand Meadow in 1911. Since 1991, however, that value has been eclipsed 13 times. The record of 53.52 inches at St. Francis, set in 1991, held until Waseca broke it in 2016, and was topped by six different stations between 2016 and 2019, including the all-time record set at Harmony.

The Minnesota State Climatology Office thanks the La Crosse office of the National Weather Service for its assistance in confirming this record, and also thanks the volunteer observer at Harmony for his service as a citizen-scientist. We are grateful for the many volunteer observers who provide the backbone of our climatological information systems.

Please note: confirming this record was delayed by the federal government shut-down early in 2019, and then by the active spring weather and floods that kept meteorologists and climatologists busy for the first half of the year. Some climate information users may recall a brief period from late 2018 to early 2019, during which Caledonia was recognized as holding the new annual precipitation record. The value of 57.97 inches at Caledonia in 2018 stood as the new statewide record until Harmony's values could be processed and confirmed.