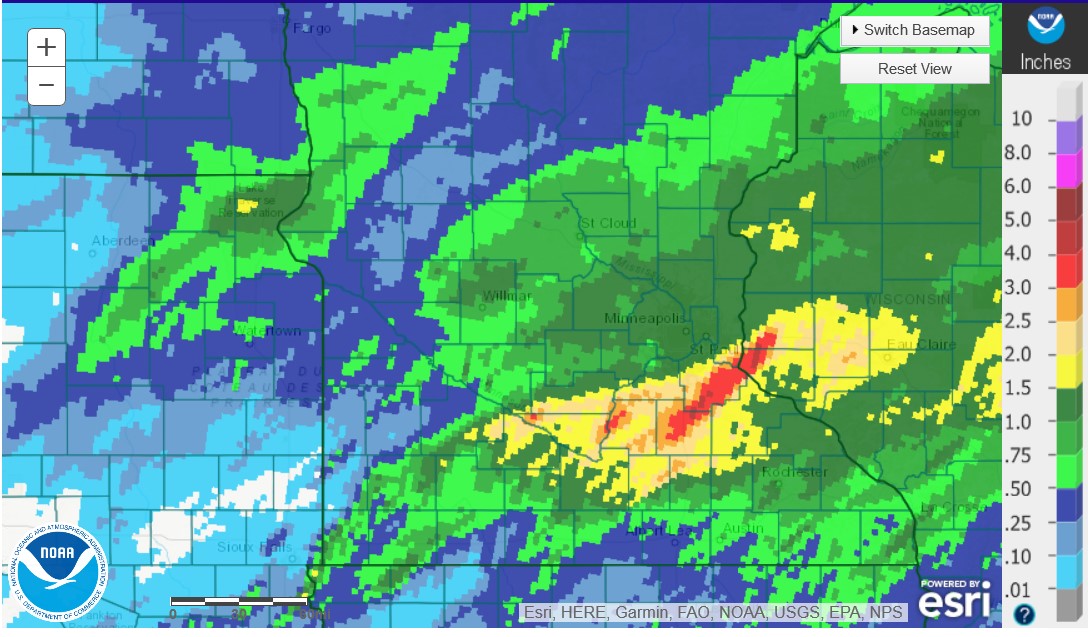 Thunderstorms developed in southern Minnesota during the mid-morning hours as warm air to the south of Minnesota rode up and over relatively cool air in place. The thunderstorms grew and intensified for several hours, producing multiple rounds of heavy rain, especially between New Ulm, Mankato, and Hastings. Moderate to occasionally heavy rain with occasional thunder reached northwestward, through and beyond the Twin Cities area, but by far the strongest and most persistent storms remained anchored over Brown, Nicollet, Le Sueur, Rice, and Dakota counties.

Rainfall totals of over a half-inch were common over the southeastern half of Minnesota, with one-inch totals occupying about 15% of the state, mainly in the south and east. The areas that saw repeat storm activity received 1.5 to 3 inches of rain, with a narrow stripe of Rice and Dakota counties seeing even greater totals.

The heavy rains caused smaller rivers and streams in the area to rise 2-4 feet. The National Weather Service posted Flash Flood Warnings to alert citizens of rapidly rising waters. Most of the flooding reported was minor, in the form of ponding in low-lying areas and streams flowing out of their banks. The rains did, however, produce a mudslide near St. Peter that prompted the Minnesota Department of Transportation to close a southbound segment of US Highway 169.

The highest total precipitation reported by a National Weather Service cooperative observer was 4.18 inches at St. Peter, followed by 3.08 inches at the Hastings Dam. Observers in the CoCoRaHS  network also recorded some totals over three inches, including a high mark of 4.45 inches one mile north-northwest of Northfield.

These rains were less than welcome in southern Minnesota, where many locations are already 50-100% wetter than normal through mid-April. (Use this tool to track and compare year-to-date precipitation at stations around Minnesota.)