It may have seemed like just another Minnesota snowstorm, but it was one of the heaviest "Alberta Clipper" snowfalls on record in Minnesota.

A low pressure system tracked from southern Alberta, Canada early on Thursday January 13, 2021, and into the western Dakotas on Friday, and continuing southeastward into western Missouri on Saturday. To the left of its track, an area of moisture and strong lift combined to produce a swath of heavy snow across western, southwestern, and south-central Minnesota. Moderate and light snow spread eastward towards St. Cloud, the Twin Cities, and Rochester, but the most impressive snows were oriented in a northwest-to-southeast band stretching along and to the southwest of the Minnesota River.

Snowfall accumulations of 6 to 11 inches blanketed western, southwestern, and south-central Minnesota, generally south and west of Lake Traverse, Willmar, Hutchinson, Le Sueur, Faribault, and Austin. The heaviest snowfall totals included 11.2 inches at Lamberton, 10 inches at Montevideo and Granite Falls, 9.5 inches at St. James, 9.3 inches at Marshall, and 9.0 inches at Canby. Outside of the heaviest swath of snow, totals of 2 to 4 inches reached as far east as the Wisconsin border, and 3-4 inches fell in the St. Cloud, Twin Cities, and Rochester areas.

Separated from the main swath of snow by 150-200 miles, lake-effect snows fell near Lake Superior, as winds off the lake blew moisture inland and wrung it out in the cold air for 6-12 hours. As a result, Duluth received 8 inches of snow, and 3-8 inches were common within 20 miles of the lake from Cloquet to Two Harbors. 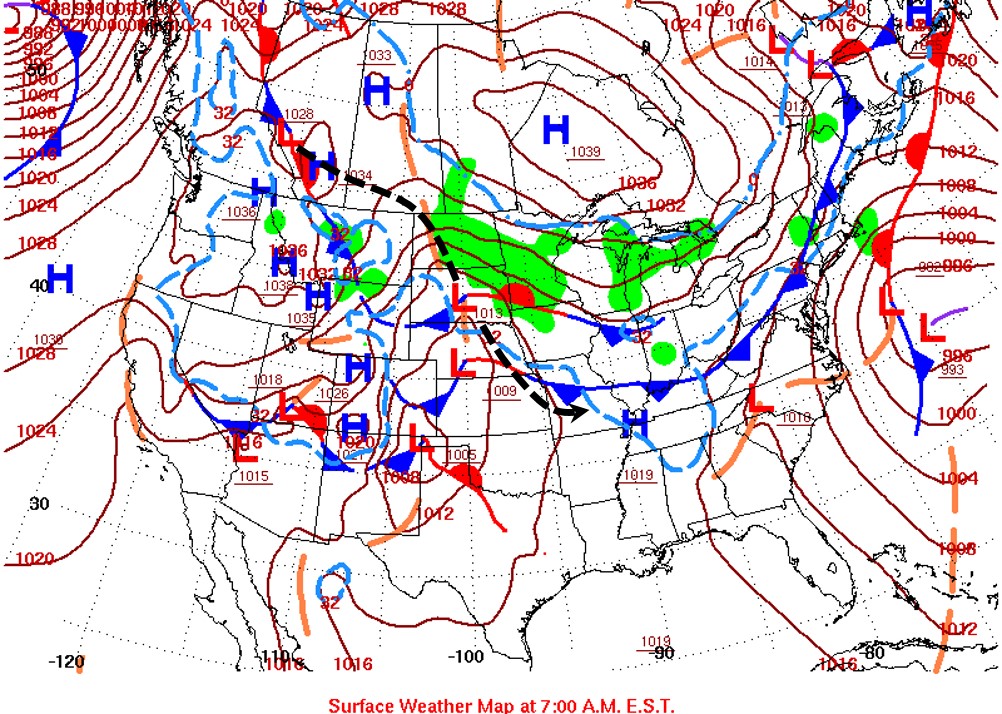 These snowfall amounts were pretty typical for a Minnesota snowstorm, but highly unusual for where this one originated and how it traveled. Minnesota's heaviest snows generally come from low pressure systems that form east of the Rockies, and then track northeastward or sometimes straight eastward through the region. These storms get close enough to the Gulf of Mexico to pick up copious moisture, and then bring that moisture northward into the colder air, where the two combine to produce intense snowfall rates. Most of the state's legendary snowstorms originated somewhere west, or especially southwest of the region.

By contrast, "Alberta Clippers" originate in Alberta or other parts of southwestern Canada, to the northwest and north of our region, and then drop southeastward. These systems tend to be much drier, because they remain far from warm ocean waters as they approach Minnesota. Their trajectory often brings very cold air with them. As a result, Clippers are known for combining powdery snow with strong winds and cold air, producing the famed Prairie Blizzards common to the Red River Valley region and exposed parts of western and southern Minnesota. They are not, in general, heavy snow-producers, with accumulations are often often in the 1-3" or 2-5" range. Alberta Clippers do occasionally have enough moisture and lift to produce over six inches of snow in some areas, but widespread swaths of over six inches are uncommon.

This storm, however, covered about a third of the state with 6 inches of snow or more, and the area receiving at least 8 inches of snow appears to have covered close to 10,000 square miles.

Prior to this event, over-achieving Alberta Clippers hit southern and southeastern Minnesota on January 27-28, 2019, and western and southern Minnesota on December 28-29, 2000. Those storms had comparable maximum snowfall amounts (11.3 and 11.0 inches, respectively), and similarly large swaths of 6"+ and 8"+ snowfall.

Comparing historical snowfall records to the paths of the cyclones  (low-pressure systems) that produced them is no easy undertaking. However, the State Climatology Office has determined that the heaviest snowfall total from any Alberta Clipper in the Twin Cities is likely 8.4 inches on January 16, 1994, with December 28-29, 2000 next, at 7.8 inches. By examining another long-term station, Milan in Chippewa County, we see that only one of its 30 heaviest daily snows on record came from an Alberta Clipper, in December of 1926. We see some evidence that Alberta Clippers occasionally produce highly localized amounts 8 inches or more, with rare ones having produced an isolated report of up to a foot, but but we see little evidence of any such storm producing substantially more snow on a widespread basis than this one did.

Thus, with snowfall totals well in excess of 8 inches over thousands of square miles in Minnesota (and covering an even larger area into the Dakotas and Iowa), this system appears to have been one of the heaviest snow-producing Alberta Clipper on record in the state.