June 2022: Mostly Warm and Dry, but the Damaging Storms Continued 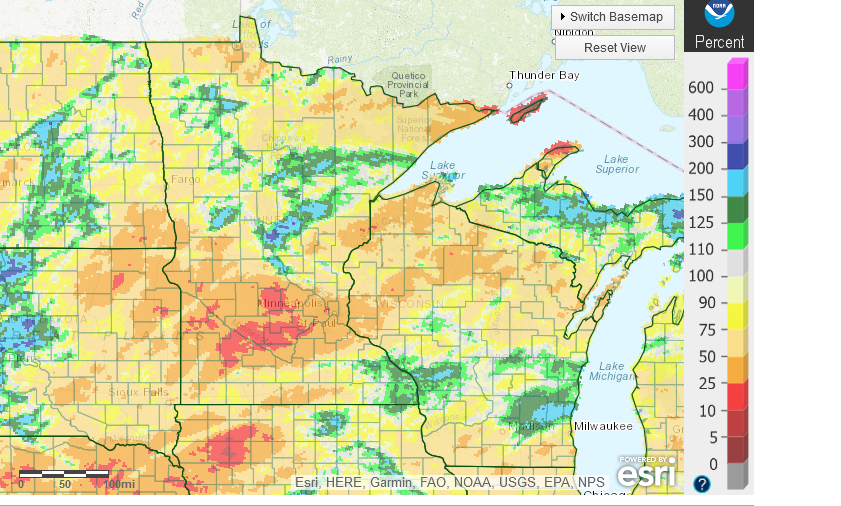 June 2022 finished as a warm, and --with a few notable exceptions-- dry month in Minnesota.

Temperatures finished 2 to 3.5 degrees above normal throughout southern, central, and western parts of the state. In the Arrowhead region, temperatures were only slightly above normal, and International Falls in far northern Minnesota finished the month with no temperature departure.

Basically, it was a changeable month, with several cool periods interrupted by spells of heat that generally grew longer and more intense the farther south one went. The most notable heat occurred on June 19th and 20th, when temperatures reached or exceeded 100 degrees F in many locations.

In the Twin Cities, eight days during June had high temperatures of at least 90 F, which ties for 11th all time (out of 150 years) for 90-degree F days during June. On the other hand, June 2022 had ten days with high temperatures in the 70s F, and ten nights with minimum temperatures in the 50s F, both of which are markers of classic Minnesota comfort weather. These spells of pleasant weather prevented the month from being dominated by oppressive conditions, especially in southern Minnesota.

About 75% of the state had below normal precipitation during June. The Twin Cities finished with 1.13 inches of rain for the month, which is only 25% of what would normally fall, and the fifth- lowest June total out of 152 years with precipitation records. Many stations in western, central, and southern Minnesota received under an inch of rain for the month, and had less than 20% of normal precipitation. On a statewide averaged basis, a typical station was 30-40% below normal.

Scattered areas of central and northern Minnesota were wetter than normal, thanks to repeat visits from heavy thunderstorms. The most notable precipitation surplus was from northwest of Little Falls into the Brainerd area. This area was hit particularly hard by evening and overnight storms on June 23-24. Other, often separate wet areas could be found southward towards St. Cloud, northeastward towards Aitkin,  in central Otter Tail County, to the northwest of Red Lake, in a stripe extending from Leech Lake to Silver Bay, and also in extreme southeastern Minnesota.

For the most part, June did not have as much severe weather as May, and certainly could not match its sheer number of severe thunderstorms. The period from June 20 to 25th was quite active, however, and producing the year's third truly destructive outbreak, as well as another that was perhaps one level down but still quite intense.