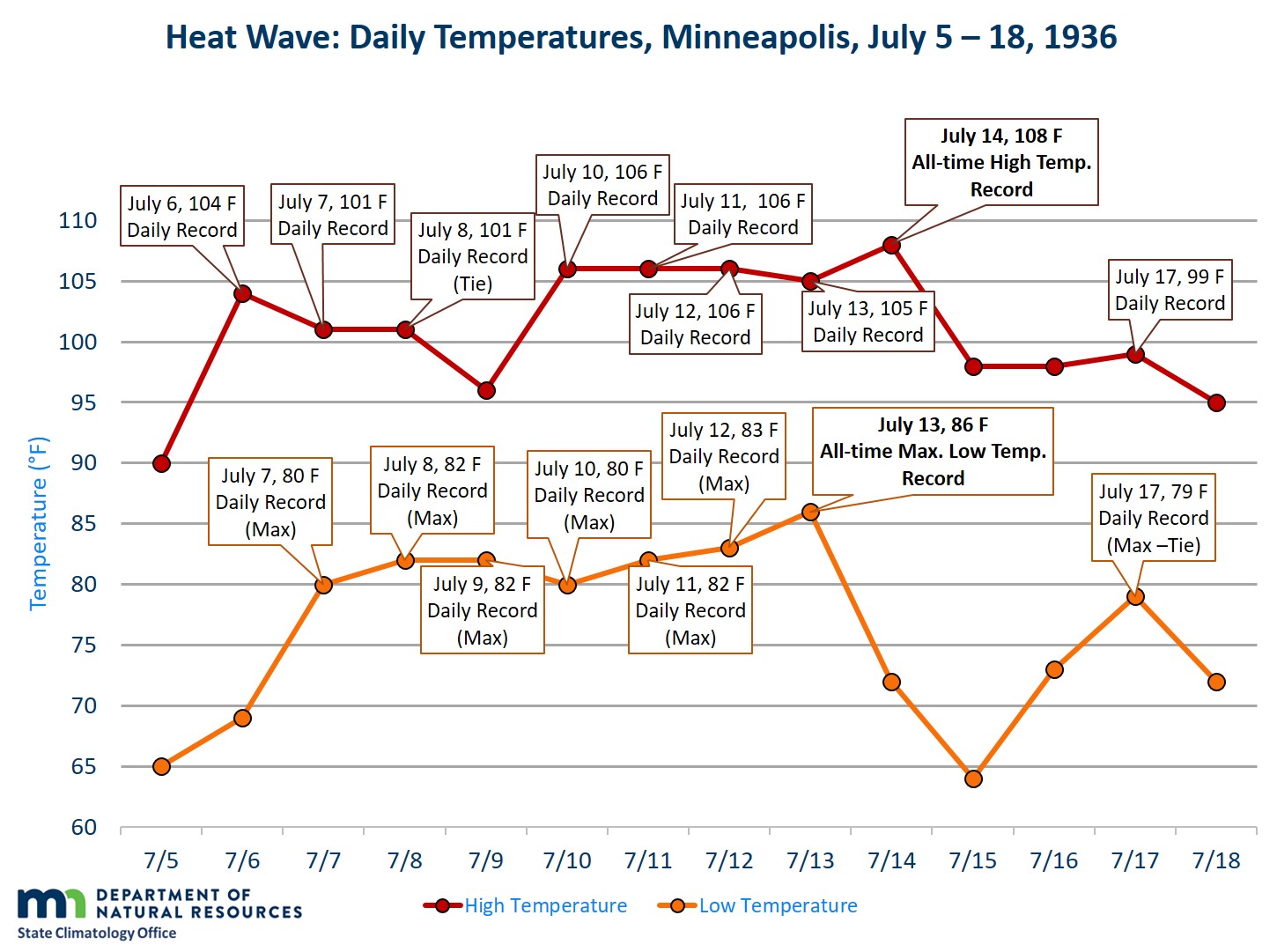 Daily high and low temperatures from July 5-18, 1936 at Minneapolis.

So, you think it's been hot?

During or after a run of sultry summer days, Minnesotans become anxious to dust off the history books. Was this the worst heat wave on record? This curiosity is natural: we seek validation that we just experienced something unique.

Most modern heat waves, however, are no match for the legendary event that gripped Minnesota from July 5 to July 18, 1936.

Weather maps of the time displayed a sprawling high pressure area covering the entire US east of the Rockies, and jutting as far north as Hudson Bay at times. This placed the entire Plains and Midwest regions in southwesterly flow, meaning that when the winds blew, they came straight out of the Sonoran Desert. These hot, dry winds primed the entire region for a prolonged and record-shattering heat event.

The heat wave included five straight days with high temperatures at or above 105 in the Twin Cities, with an all-time record high of 108 F on the 14th, and seven straight days with low temperatures failing to fall below 80 degrees, with a low of just 86 F on July 13th. These measures of excessive heat are unmatched in records going back to late 1872.

The heat was not limited to the Twin Cities, or even to southern Minnesota, and exhibited a ferocity never before (or since) documented in central and even northern portions of the state. St. Cloud recorded nine 100-degree days (with a high of 107 F),  Brainerd recorded six (including a high of 106 F), Cloquet recorded eight (high of 105 F), and the Grand Rapids Forestry Lab recorded six (high of 104 F). Even Duluth, famously "air-conditioned" by Lake Superior, recorded three 100-degree days, with a high temperature of 106 F on July 13th.

To make matters worse, it scarcely rained at all during that 2-week onslaught of heat. Of the stations named above, only St. Cloud and Brainerd received over a tenth of an inch of rain. The combination of extreme heat and dry conditions only worsened the devastating drought that had been crushing the region for years already.

The heat wave came at a time without air conditioning, with only limited availability of fans, and when, as climate historian and retired Extension Climatologist Mark Seeley has pointed out, many Minnesotans would often sleep outside to stay cool. During this exceptional period, however, citizens found it hard to cool down properly in any circumstance, causing heat exhaustion, heat stroke, and up to 900 deaths throughout the state. By any measure, this is one of Minnesota's worst weather events on record.

By measuring air temperature alone, this heat wave has no competition for duration or daily intensity. It was, however, a largely "dry heat," with daily dew point readings in the 50s and low 60s F for most of that time, meaning the Heat Index rarely exceeded the air temperature. Taking into account the effect of moisture in the air on human comfort and heat stress, however, the 4-day heat wave from July 17-20, 2011 may have the greatest daily intensity. Even though air temperatures remained in the 90s in most of the state for that event, dew point temperatures were frequently above 75, and even 80 degrees F. These exceptionally humid conditions led to heat index values of 110-125 F, with Moorhead recording a state-record 134 F heat index on July 19, 2011.

Despite a sharp warming trend observed over the past several decades, Minnesota has not seen more frequent high temperature extremes, and current trends do not point to a greater likelihood of events like the 1936 heat wave. Instead, dry heat waves appear to be yielding to more humid ones, like the one in July 2011. This may be a result of the wetter climatic conditions overall. The 1936 heat wave was at least in part, a product of extreme drought. The return of any such conditions would increase the likelihood of high temperature extremes.