Sorry, No Evidence of July 4th Snows Anywhere in Minnesota 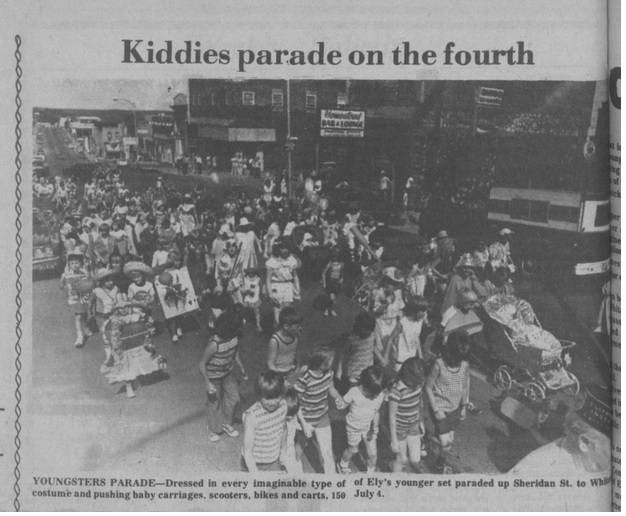 4th of July Parade in Ely, MN on July 4, 1977, during a year widely claimed to have snow in northern Minnesota on July 4th.
Courtesy: The Ely Echo

Of all the claims and assertions that the State Climatology office receives, this is one of the strangest. Every once in a while, a letter, a phone call, or an e-mail, asks about whether or not it has snowed in Northern Minnesota during the month of July. Most of the time the caller/writer is convinced the answer is yes, and then references an event they either witnessed or heard about. The cities vary, sometimes as far south as Brainerd, but Ely seems to be a perennial favorite.

The strangest part is the date. It is always the 4th of July in the town they mention. Not July 3rd or 7th. Why not July 22nd? Apparently, extraordinary meteorological events only occur during holidays.

Oddly, few can remember what year it was, except to narrow it down to within a decade or so. Also, much like Sasquatch and the Loch Ness Monster, there were never any cameras handy to record such a rarity. Requests of a scrap of newspaper that recorded the momentous event have gone unfulfilled (and we have searched too!). So many unconfirmed reports of July 4th snows have arrived at the office over the years one would think it is a winter wonderland during the "rockets red glare" north of I-94. We often wonder if the people are mistaking Memorial Weekend for the 4th of July. Memorial Day weekend snows are rare, but not unheard of.

Upon receiving a new report of July snow, we investigate each one to see if it is plausible, searching through climate records from all available stations for the years and even decades surrounding the purported memory, using digital and hard-copy sources. The temperatures found are almost universally too mild to support snow. The few cases where snowflakes could be plausible, the conditions associated with the date were under a large dome of high pressure with clear skies.

We're sure these people saw snowflakes according to the vivid descriptions, usually while sitting watching a parade in a place like Ely. Few have been able to pinpoint a year. We've sifted through years of data gathered by National Weather Service observers in the area and have never been a recorded observation of snowfall. While it is possible that it has snowed somewhere in northeast Minnesota sometime in July, we have not as of yet found an official record of it. Bruce Watson, a now-deceased consulting meteorologist whose knowledge of Minnesota's climate was unsurpassed, took a tougher stance on the subject. In 1997, he wrote: "June has brought measurable snow in the Arrowhead more than once. Snow probably has occurred there in very late August, although we have never found an official record of such. July snow would be an extremely rare event, and has not likely occurred in the last 300 years. Snow probably has never occurred between June 20 and August 20 since the USA took over the region in 1815."

Yet the stories prevail from some credible sources. An editor from the National Geographic magazine called and inquired about Jim Brandenburg's story that it had snowed in every month in northern Minnesota. Our response still had to be a shaky "maybe." Weather stations are few and far between in northeast Minnesota, so it is certainly possible that flurries have fallen between the cracks.

Climate historian Tom St. Martin investigated one possibility in Stillwater on July 4, 1859 made by a pioneer Stillwater area journalist named A. B. Easton. However Easton made the claim fifty years later on July 5, 1909 and according to St. Martin his recollection does not appear to be corroborated by other accounts from that time. While it was certainly a cool holiday that year newspaper accounts from the area only seem to mention rain showers and temperatures in the 50s F. There could have reasons for the discrepancy, ranging from confusion over the year to distance from other observers or accounts however what’s certain is the story of the elusive July 4th snow has had a long history here in Minnesota.

As it stands right now the latest recorded measurable snow in Minnesota remains at 1.5 inches at Mizpah in Koochiching County on June 4, 1935, and the earliest documented snow in Minnesota is a trace that fell at the Duluth Airport on August 31, 1949.