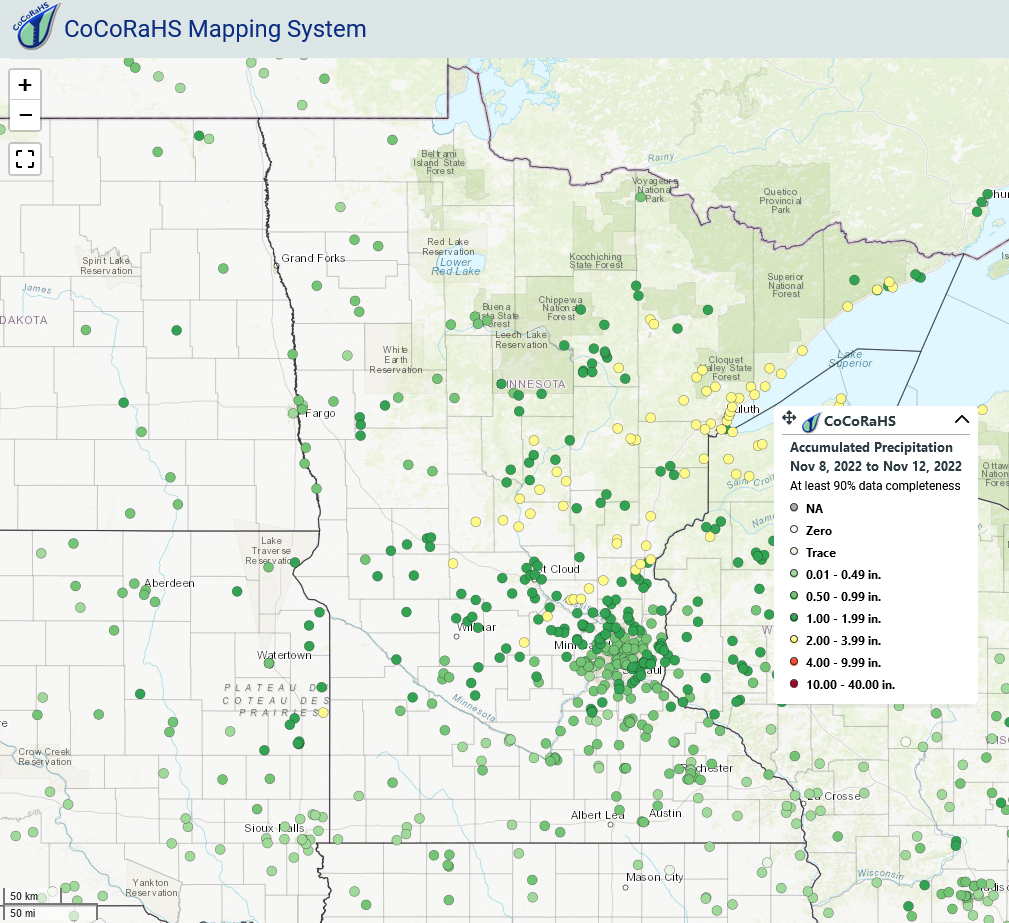 The storm was the latest in a long and ongoing series of intense weather systems to affect the region around the 10th of November. Although this system does not have the historic flair of the Armistice Day Blizzard of November 9-12, 1940 or the storm that famously wrecked the Edmond Fitzgerald on November 9-10, 1975, it was nevertheless a record-breaker, arriving with more moisture than ever observed during November in Minnesota.

The system began with a strong feed of moisture into the region on Tuesday November 8th. Showers and thunderstorms developed during the afternoon in southwestern Minnesota, and expanded northeastward during the evening and into the night. Many of the thunderstorms produced 5-10 minutes of heavy rainfall, and after several rounds of them, parts of central and southern Minnesota had received over an inch of rain.

On Wednesday, a warm and even more humid air mass moved into the region. Temperatures rose into the 60s and even low 70s over the southern half of Minnesota, with dew point temperatures approaching 60 degrees--exceptionally muggy for this time of year. After showers and thunderstorms dissipated over northern Minnesota during the day, additional storms began parading northeastward from central into northeastern parts of the state during the evening and overnight. Some areas saw six or more waves of thunderstorms, leaving a wide area stretching from Marshall, Litchfield, and Ortonville, straight through Duluth to the North Shore, with an additional 1.0 to 2.5 inches of rain. Rain this heavy is rare during November, and daily precipitation totals exceeding 1.5 inches during November would make the monthly top-10 at most of Minnesota's long-term stations, and amounts exceeding two inches would break or contend for all-time November daily records at many locations.

The storm system switched gears on Thursday, as cold air swept rapidly across Minnesota. Cold rains and freezing rain had put a glaze across some northern Minnesota communities already, but the cold front caused temperatures to tumble memorably in southern Minnesota. In the Twin Cities, after an unseasonably muggy morning, temperatures fell 20 degrees in four hours, and 40 degrees in 12 hours. By evening, temperatures were in the upper 20s statewide, and we appeared to switch seasons in a matter of hours.

Snow and winds accompanied the colder air, especially in northern Minnesota. In northwestern parts of the state, heavy snow and blizzard conditions hampered travel in the Red River Valley. Snowfall totals included a statewide high of 9.1 inches at Warroad, with 7-9 inches reported at Roseau, Thorhult, Lancaster, and the Lake Bronson Dam. A moderate blanket of snow covered much of northern Minnesota by the time the storm ended, with 5 inches at Kabetogama, 3.7 inches at International Falls, and and 3 inches at Bemidji.

This strong, multi-day storm left much of Minnesota with a half-inch to an inch of new precipitation, though areas that had multiple thunderstorms or prolonged heavy precipitation received much more than that. Numerous CoCoRaHS observers in the Duluth area, and also between Big Lake and Princeton in central Minnesota, reported totals from November 8th to 12th of three inches or more. These amounts essentially double "normal" precipitation amounts for the entire month of November. The highest total from a National Weather Service cooperative observer was 3.05 inches at Floodwood. Other high precipitation totals included 2.73 inches at Two Harbors, 2.53 inches in Cloquet, 2.42 inches in Mora, and 2.29 inches at Melrose. Officially, Duluth received 2.69 inches, St. Cloud received 1.64 inches, but the Twin Cities, International Falls, and Rochester all reported under one inch of precipitation from the storm.

It wasn't the heat, it was the humidity! Although southern and central Minnesota experienced unseasonably warm conditions during the first half of the storm, it was really the amount of water vapor (humidity) that made this system stand out. The Twin Cities recorded a dew point of 61 F on November 9th, tying a record for the date, and then recorded 60 F on the 10th, which broke the record for the date and became the latest in the season to have recorded such a high value.

Perhaps even more impressively, the total amount of available moisture with the system far exceeded anything observed during any November in the 80 years of upper-air data from weather balloons. Indeed the quantity known as "precipitable water," which is the total amount of water in the atmosphere above a location if all of the moisture fell out as precipitation, had previously never been above 1.20 inches during any November day, based on the historical weather balloon launched from at St. Cloud, and Chanhassen since 1996. During this event, however, four consecutive balloon launches spaced 12 hours apart, tied, broke, and then obliterated that record. The balloon launch at 6 AM on Thursday November 10th returned a precipitable water value of 1.47 inches, which is 22.5% higher than the former record value.

Although we can only speculate about precipitable water values during other historic November storms, including the 1940 Armistice Day Blizzard, which holds many of Minnesota's daily precipitation records for November, we can say with certainty that we have not measured this much atmospheric moisture with any November weather system in Minnesota since 1948. It's worth noting, too, that the period since 1948 includes some incredibly wet November weather systems, including the bulk of 1991's Halloween Blizzard, a record-setting storm from November 9-11, 1998, and massively-wet storms in late November of 2001 and mid-November 2015. None of those recent systems had precipitable water levels that rivaled this great November storm of 2022.