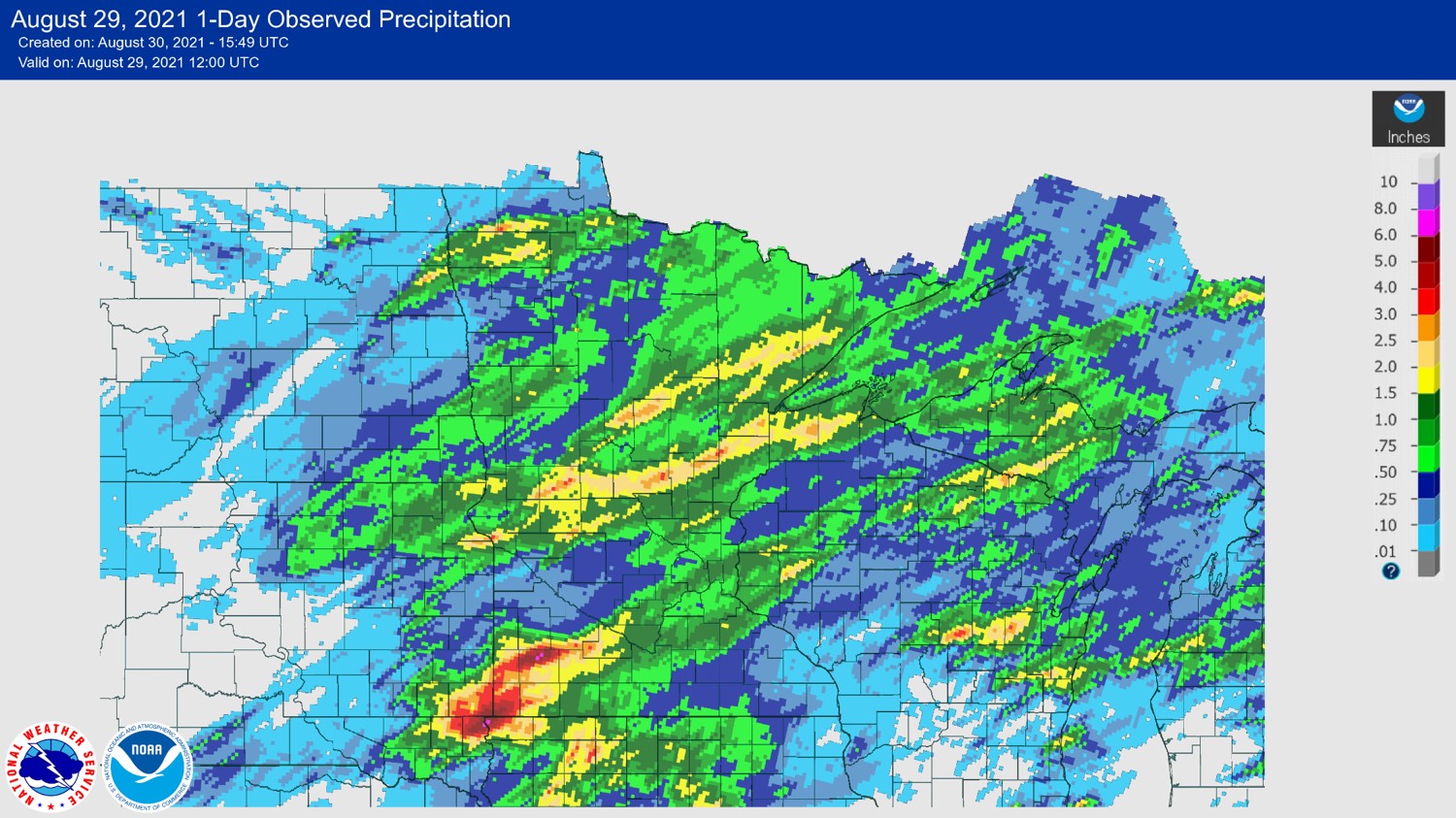 Thunderstorms pounded many parts of Minnesota throughout the day on Saturday, August 28, with scattered reports of wind damage, large hail, and flash-flooding, along with a widespread soaking rainfall elsewhere in state.

The first leg of this event occurred during the morning and early afternoon across western and central Minnesota, as a huge thunderstorm with tops estimated by radar to be nearly 12 miles high, produced reports of intense winds and large hail. The storm produced extensive damage to trees, limbs, and road signs in Big Stone, Grant, Pope, and Stearns Counties. A MnDOT sensor measured 80 mph wind gusts in Grant County, with sensors elsewhere in the area measuring gusts of 60-72 mph. This thunderstorm cell also produced a swath of large hail, from Ortonville in Big Stone County to Foreston in Mille Lacs County. Baseball-sized hail (2.75 inches in diameter) was reported near Correll and Danvers, and the National Weather Service received numerous reports of hail ping pong ball-sized or larger along the storm's path.

The second leg of the event produced a wave of even more severe thunderstorms for much of the evening, primarily in southwestern Minnesota. Fueled by very warm, moist air to the south, these storms also grew at times to heights of over 60,000 feet. The winds snapped trees near Iona and Comfrey, damaged grain bins near Storden and Westbrook, and produced an apparent swath of assorted tree, power line, and light structural damage from Murray County, through Cottonwood, Watonwan, Brown, and Nicollet County. The storms also produced enormous hail near Current Lake in Murray County, where observers reported hail with diameters equivalent to baseballs, and even grapefruit (4 inches).

In addition to the severe weather reports, the intense thunderstorms had extremely high rainfall rates, and led to some flash-flooding in southwestern Minnesota. A CoCoRaHS observer south of Tracy reported 6.7 inches of rain, and another in southwestern Rock County reported 4.94 inches. Other, non-severe thunderstorms led to beneficial soaking rains over much of Minnesota, with the full day of rain and storms yielding multiple swaths of 24-hour rainfall totals of one-half to to 1.5 inches.