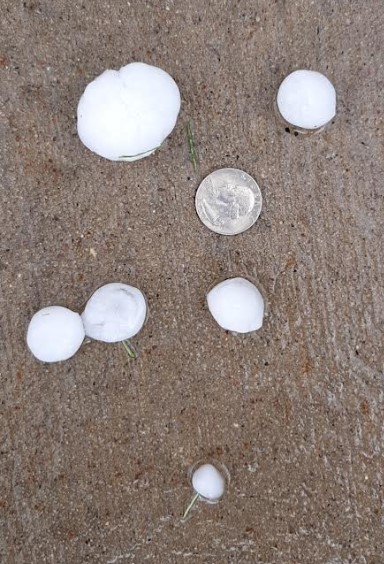 Samples of hail collected near the Mississippi River in St. Paul on the afternoon of May 19, 2022.
Courtesy of J. Loughry

The state added its fifth significant severe weather day to a bumpy May, as heavy hail pelted Minnesota's three largest cities, along with surrounding communities on May 19, 2022. Minneapolis, St. Paul, and Rochester all were hit squarely by strong thunderstorms with hail.

Cool air had been sinking in over much of Minnesota in response to a weak front that had triggered storms the previous day, but a strong low pressure area helped warmer and more humid air stream into southern Minnesota, with a sharp boundary setting up over the southern quarter of the state. Strong thunderstorms developed along this warm front during the late morning and began producing hail by mid-day in Albert Lea, and then by early afternoon in Rochester. In the Albert Lea area, golf ball to baseball-sized hail fell. Most of the hail reported in Rochester was half dollar to ping pong ball-sized.

Later in the afternoon, the warm front surged farther north and a new cell developed in the far western Twin Cities area. The storm intensified quickly as it tracked eastward, and produced a barrage of hail across the heart of the Twin Cities, with quarter to half-dollar-sized hail in Minneapolis giving way to half dollar to golf ball-sized hail from St. Paul and its northern suburbs, eastward through central Washington County and into Wisconsin. The hail fell intensely, with roads and yards turning mostly white, and with the skylines of both Minneapolis and St. Paul being obscured by streaks of falling hail, as visibility fell to less than a quarter-mile. The storm hit right as schools were letting out, and social media feeds filled immediately with pictures and videos of hail pounding on cars, smacking against windows, bouncing of of lawns, and smashing itself on the pavement.

Other strong thunderstorms pushed eastward out of southern and southeastern Minnesota during the remainder of the afternoon and evening, producing heavy rains in far southeastern areas. Many observers in Winona county measured over three inches of rain with these storms.