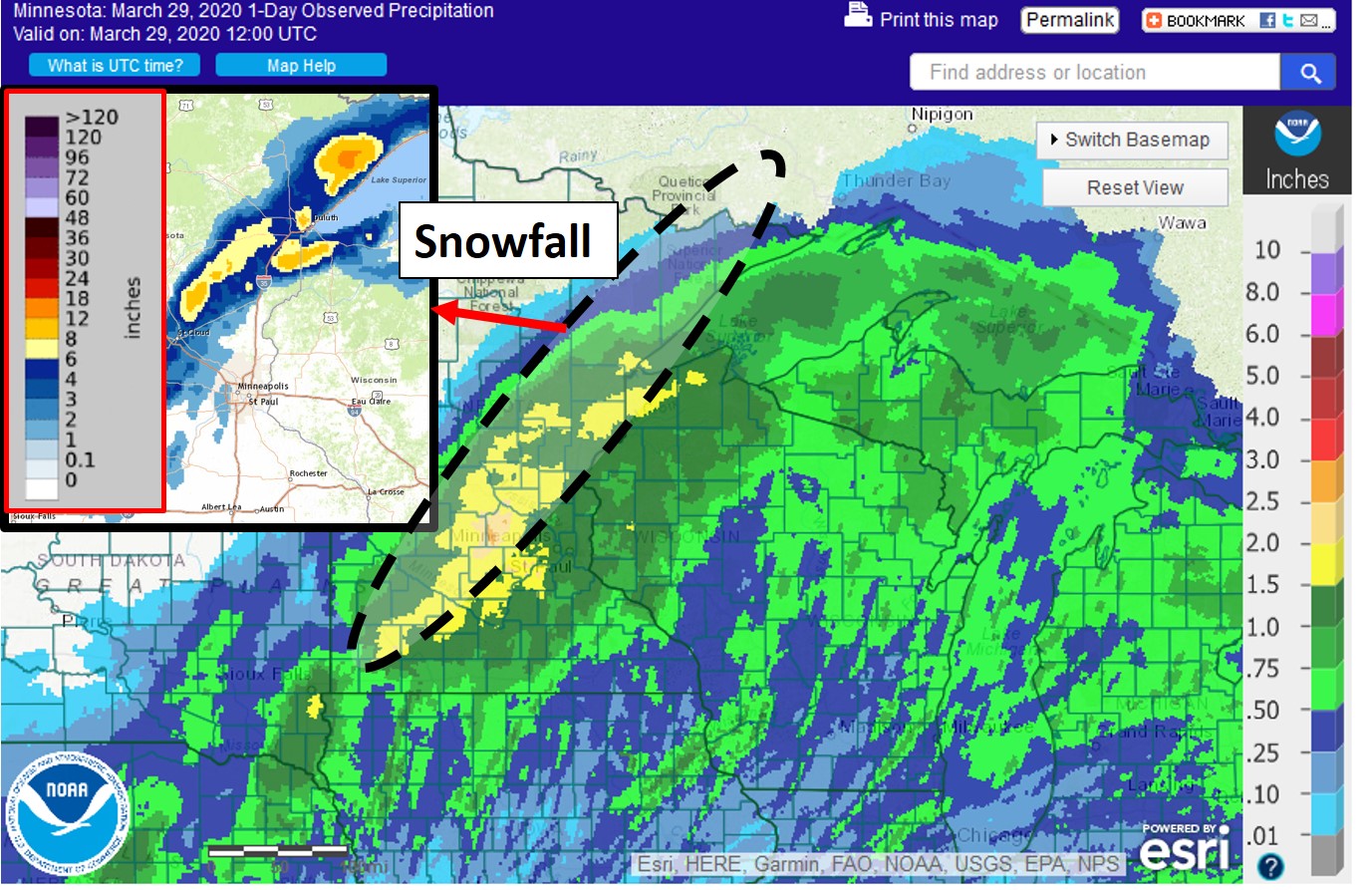 A strong spring storm brought thunderstorms and heavy rain to southern Minnesota, accumulating snows to central and northeastern Minnesota, and strong winds to the entire region.

A low pressure system emerged from the Rockies on the afternoon of Friday, March 27, and pumped warm and increasingly humid air into Minnesota. As the weather system moved into Iowa early Saturday morning, waves of light precipitation marched from south to north across southern parts of the state.

After a brief lull, the heaviest activity developed during the afternoon as the storm intensified, and bands of heavy rain and embedded thunderstorms began spiraling around the center of low pressure. These were the first thunderstorms of the year in many places, and though they only lasted 5-10 minutes at a time, they persisted on and off for 2-4 hours, leading to wet basements and ponding of water on streets.

The heaviest precipitation set up in a band from southwestern Minnesota, to St. Cloud, the western Twin Cities area, and east-central Minnesota just south of Duluth. The highest official precipitation total from a National Weather Service cooperative observer was 1.99 inches at Milaca, followed by 1.88 inches at Chanhassen, 1.82 inches at Jordan, and 1.81 inches at Lamberton. Totals slightly above two inches were measured by CoCoRaHS observers near Watkins, McGregor, Dassel, and Hutchinson. In general, the system produced amounts of over an inch across the southeastern 40% of the state.

Many of the areas with the heaviest precipitation also saw precipitation turn over to snow on Saturday night into Sunday morning. Isabella reported 13 inches of snow, with 6.2 inches at Duluth, 5 inches at Bruno, and four inches in St. Cloud.

As the system departed, strong northwesterly winds developed, making for raw conditions on Sunday. The combination of rain and strong winds was too much for the for remnant ice on some southern Minnesota and Twin Cities area lakes, resulting in a flurry of ice-out reports over the weekend.