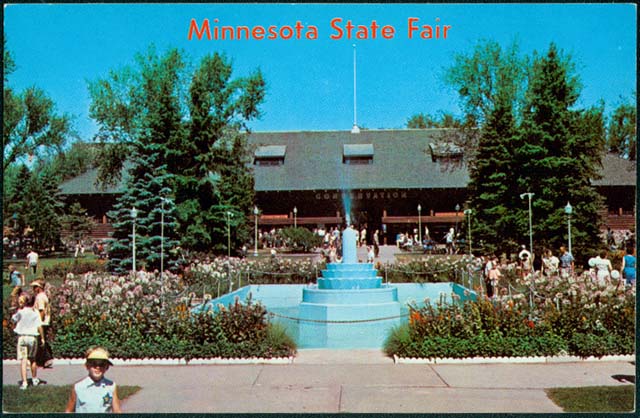 It's time once again for the "Great Minnesota Get Together." Weather plays quite a role in the State Fair experience. Who doesn't remember braving the heat with the crowds on one of the busier intersections on a sweltering afternoon? A quick rain burst will send people scurrying for cover, and folks savor balmy days in the 70s with just a bit of a breeze. Below are some State Fair weather facts and notable weather events that have happened in past Minnesota State Fairs.

The Minnesota State Fair has been held at its current site since 1885. Before that it was held at a variety of locations including Fort Snelling. There were some years when the Fair was not held because of war, disease, or for logistical reasons. These years are: 1861 (Civil War), 1862 (Civil and Indian War), 1893 (Columbian Exposition), 1945 (fuel shortage because of WWII), and 1946 (outbreak of Polio.) In 2020 the fair was not held due to COVID 19.

Although a wide variety of weather has greeted Fair-goers over the years, it's the late-summer heat waves that are perhaps most memorable. By far the highest temperature in the Fair's history was 104 degrees F, on September 10, 1931. In fact, the second-highest temperature ever recorded during the Fair was 99 F, notched the same year but two days earlier. Not surprisingly, the 1931 Fair is the current record-holder for high temperatures, averaging 92.6 F, which is 2.7 F higher than the runner-up (1922). It is worth noting that the 1931 Fair ran eight days, from September 5-12, whereas the Fair currently runs 12 days, making it less likely to sustain such high temperatures over that longer period. On the other hand, 1931's record is even more impressive considering that the entire Fair took place during September, when extremes of heat become increasing rare.

Recent steamy State Fair conditions were experienced during 2013, which was the third warmest on record and also had a record six days with 90-degree high temperatures. 2012 was quite warm as well, with an average daily maximum temperature of 87.1 degrees. The last six State Fairs, however (2014 through 2019), generally have lacked hot weather, with no 90-degree high temperatures recorded in any of those years. There wasn't even an 80 degree maximum temperature in 2019.

The largest rain event in the State Fair's history was August 30, 1977. At 8:20pm heavy rains hit the State Fairgrounds. The U of M St. Paul Campus climate observatory one mile north of the Fairgrounds reported 4.06 inches of rain. This caused some of the worst street flooding seen at the Fairgrounds. The bulk of the rain fell in a 3 1/2 hour period from 8:15pm to 11:45pm. The grandstand show was cancelled, and people had great difficulty trying to leave the Fair. The Twin Cities International Airport saw 7.28 inches from this event, second all-time only to the July 1987 "Superstorm" total of 10.00 inches. People driving on I-94 leaving the Fair found water "up to their hood ornaments" in low areas under bridges.

The peak of severe weather in the Twin Cities occurs in June, but severe storms can and have happened during the State Fair. As recently as 2007, just two weeks before the Fair was to start, a thunderstorm with high winds estimated to 67 mph hit the fairgrounds. Below is an excerpt from Storm Data on August 11, 2007.

A long and wide swath of damaging wind extended from just west of the Minnesota State Fairgrounds in Falcon Heights to the northeastern corner of the city of St Paul. Approximately 4000 trees were felled. Affected neighborhoods were St. Anthony, Como and Phalen. The worst damage was in the Como Park area, where many trees fell on houses, vehicles, sheds and garages. One tree crashed into a house and destroyed it. One man was injured when a window blew in on him. At the State Fair, part of the grandstand roof was torn off, and roofs were also torn off some exhibition buildings. Dozens of vendor booths were blown around, with many severely damaged. The damage was oriented from west to east. At one point shortly after the storm, Xcel Energy reported over 250,000 outages across the Minneapolis-St. Paul region.

On August 31, 1989, Golf ball-sized hail fell at the Fair in the afternoon, baseball-sized hail was reported at Fairmont, St. Michael and Hutchinson.

On August 17, 1940, a severe windstorm hit the Fairgrounds one week before it opened and blew down tents and damaged equipment on Machinery Hill. One of the tents downed was a block long "big top" tent that housed the International Harvester Co. farm implements. Persons on the hill escaped injury.