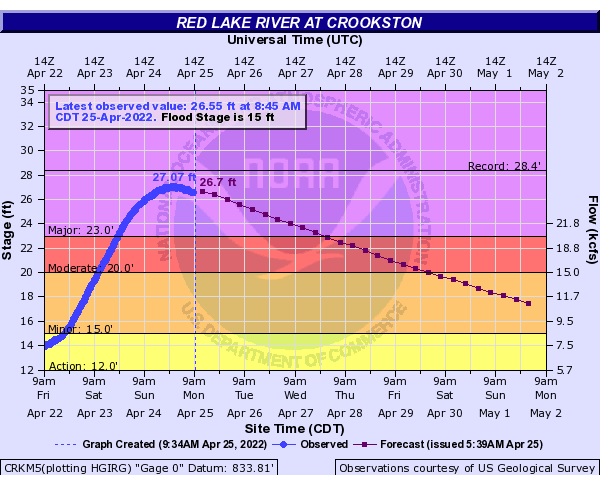 The latest in a series of large weather systems produced waves of rain and thunderstorms across Minnesota, with heavy rains drenching parts of the northwest, hail and strong winds reported in the southeast, and a small tornado reported near Crookston. As has been the case frequently this spring, very strong winds swept across Minnesota, lasting for over 24 hours.

A large area of low pressure sprawling over the western US on Thursday April 21st, intensified and tightened its circulation as it moved to the eastern Colorado High Plains on Friday. From there it then tracked north-northeastward into Nebraska, South Dakota, eastern North Dakota and eventually northern Minnesota over the weekend.

Heavy thunderstorms spread from south to north across different parts of the state during Friday. The heaviest storms formed near and east of the Red River, and dropped 1.5 to 3 inches of rain near Crookston, Red Lake Falls, and Bemidji. This rain led to flash-flooding of streams and low-lying areas. Additional strong thunderstorms pounded parts of the Rainy River, along the Canadian border.

More thunderstorms formed on Saturday, and these produced scattered severe weather. A small tornado was filmed near Crookston in the late afternoon, and thunderstorms in central and southeastern Minnesota produced isolated reports of 1-inch diameter hail and spotty wind damage to trees. These storms produced vivid lightning and heavy rain, though their fast movement generally kept total precipitation amounts under one inch, and under a half-inch in most areas.

A cold front pushed through Minnesota Saturday night, with strong westerly winds reported across the state, especially on Sunday. Winds gusted between 50 and 60 mph across much of central and southern Minnesota. Cold rains fell on and off throughout Sunday and Sunday night, especially in the northern half of the state.

Precipitation totals from the multi-day event included 4.08 inches at International Falls, 3.92 inches at Red Lake Falls, 3.84 inches at Thorhult, and 2.88 inches at Waskish. The heavy rains led to some stream flooding as well, with the Red Lake River surging to within about 16 inches of record levels on Sunday evening.