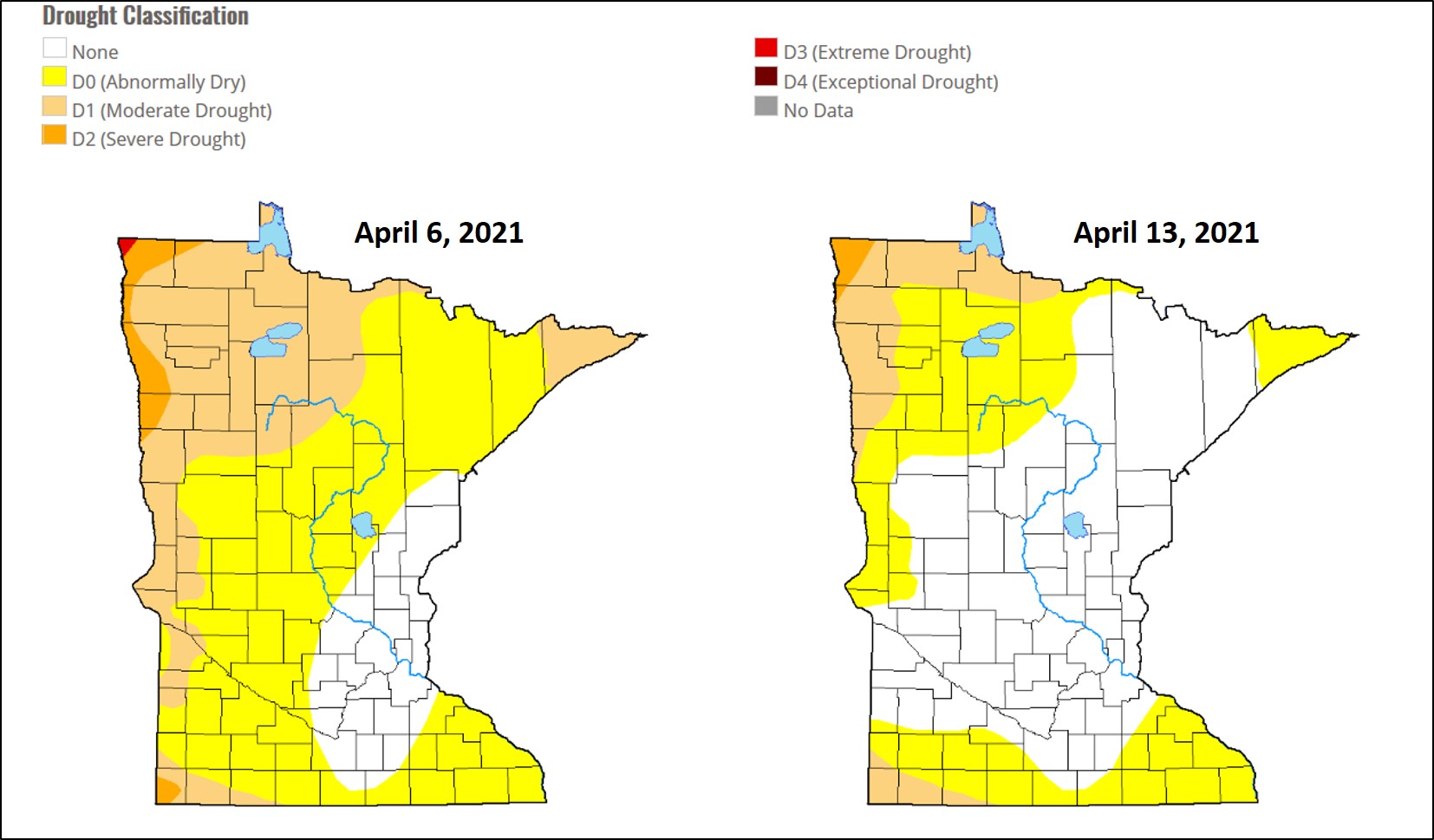 Comparison of drought coverage maps for April 6 and April 13, 2021.
Courtesy: US Drought Monitor

A 10-day period of seemingly-endless clouds and precipitation took a bite out of ongoing drought, which had been escalating through the winter and spring in Minnesota.

The unsettled period had several distinct "moods." First, scattered thunderstorms and rain caused some noisy afternoons and evenings throughout Minnesota from April 5th through the 7th. Then, the rains became lighter and steadier, but also more widespread, eventually soaking much of the state through April 9th. On the 10th-13th, a new system to the southeast combined with one pressing in form the northwest to produce periods of rain and snow across much Minnesota. On the 14th, as the systems had either dissipated or moved away, remnant light showers affected parts of eastern and northern Minnesota.

The wet conditions were initiated by the same low pressure area to the west that had produced southerly winds and record heat on Monday April 5th. The winds also imported large quantities of moisture from the Gulf of Mexico. The low crawled through the region over a period of several days, intensifying, dying, and then reforming along the way.

Scattered thunderstorms erupted Monday afternoon and evening (April 5th) over central and southern Minnesota, and spread northeastward during the night. More thunderstorms flared up Tuesday afternoon and evening, with general rains spreading westward into central, western, and northern parts of the state overnight.  These were not large or particularly severe thunderstorms, though some of them did produce pea-to-quarter-sized hail. Instead, the storm cells were compact, relatively short-lived, and numerous, with vivid lightning and loud, cracking or "ripping" thunder. Radars lit up with little red blips, typically only 5-10 miles across, but arriving by the dozen as individual waves of instability and lift worked through the region. Areas that ended up under a pronounced convective axis may have observed 5-10 individual thunderstorms and multiple hours of nearly continuous thunder in a single calendar day.

Additional thunderstorms pinwheeled out of Iowa and Wisconsin on Wednesday, with thunder finally petering out on Thursday as the system weakened, although showers and bands of rain continued rotating counterclockwise through Minnesota into Saturday April 10th.

Moisture from a system to the southeast eventually got pulled northward, and then westward into a new system near Winnipeg over the weekend of April 10th and 11th. This system was much cooler, and cold rains gave way to snows over northwestern Minnesota, with small waves of snow showers progressing eastward and southward from the 12th into the 14th. The only snowfall totals of consequence were in the northern third to quarter of the state, where 2-4 inches fell.

In total, the various systems produced an inch of precipitation or more over about 80-85% of Minnesota, with far southeastern and a small part of northwestern Minnesota receiving slightly less. Large swaths of western, central, northern, and northeastern Minnesota received over two inches of precipitation, with three inches or more observed from near Ortonville, Morris and Alexandria, towards Little Falls, Brainerd, Grand Rapids, International Falls, and into the Arrowhead region of northeastern Minnesota.  Volunteer observers near Alexandria and north of St. Cloud recorded 4-5 inches over the 10-day period, with a high value of 5.94 inches recorded by a CoCoRaHS network participant near Five Points, in the Sartell area.

The precipitation made a welcomed dent in the escalating drought across the state. The proportion of the state designated as "abnormally dry," fell by about 40% in one week, while the areal coverage of moderate and severe drought fell by 65-70%.