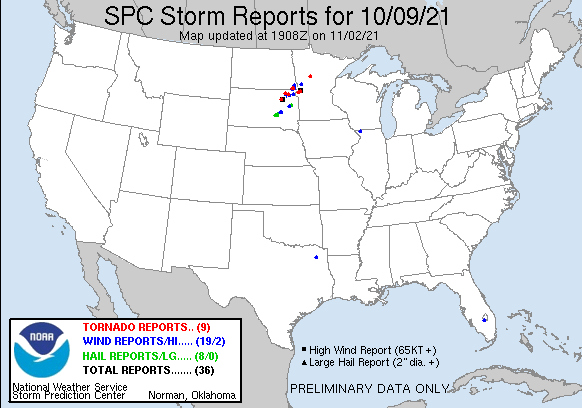 Thunderstorms associated with the circulation of a low-pressure system produced a flurry of small tornadoes and funnel cloud reports in western Minnesota and eastern South Dakota on Saturday October 9th.

The tornadoes formed in relatively warm and moist conditions that resembled a stripped-down version of traditional "tornado weather," though the tornadoes did not form the way our most prominent tornadoes form. Instead of developing systematically from isolated supercell thunderstorms, these formed from a series of squalls and small circulations connected with a moving line of storms. One tornado formed south of Wheaton, and another formed south of Park Rapids and moved into town where it damaged a Ford dealership. This tornado had path of under 1/2 mile, which is common with these non-supercell tornadoes, but led to EF-1 level damage, with winds estimated up to 100 mph.

Four days later, another weather system did it again, in almost the same places!