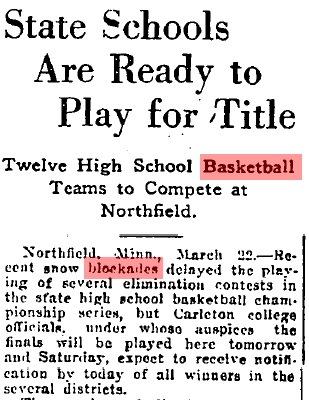 There's been a long-standing myth of the "Tournament Snowstorm." The myth goes that the Twin Cities will get a big snowstorm during tournament time. In particular, during the State High School Boys Basketball Tournament. This myth has been around for many years. In 1975, Bruce Watson notes in his book: WCCO Weather Almanac 1975 that "The State Basketball Tournament Storm" is no myth. We simply get a lot of storms around the equinox, the general time of the tournament." Indeed, in the 25 years before 1975 there were several large snowstorms that occurred around the basketball tournament. Some of the most memorable were: 13.7 inches on March 22, 1952 and 11.4 inches were on March 23, 1966. It was storms like these that perpetuated the myth.

How often does it snow 4 inches or more during the State High School Boys Basketball Tournament? The tournament began in 1913 and in those days was 3 days long. Later the tournament expanded to cover 4 days by the 1990's. Snow events were looked at for each day of the tournament. The number of times four inches or more fell during the tournament were noted over the past 101 years. Meteorologist Ron Trenda provided the initial research through 1987 and the State Climatology Office continued the check through the year 2014. Here are the results:

In addition, the chances of having a balmy day of at least 50 was looked at. Here are the results:

In the last 30 years or so, the legend has dropped the "basketball" part and is more commonly known as the "tournament snowstorm." This is because over the years, other tournaments have gained in popularity such as wrestling, girls basketball and boys and girls hockey. The tournament season now lasts over a month and has a much greater chance of seeing a heavy snow event. Thousands of people are affected if heavy snow falls and this makes the snowstorms stand out. In order to have a "real" tournament snowstorm (in the old historic sense) it will have to fall during the boys basketball tournament. The tournament in 2015 is from March 11-14.