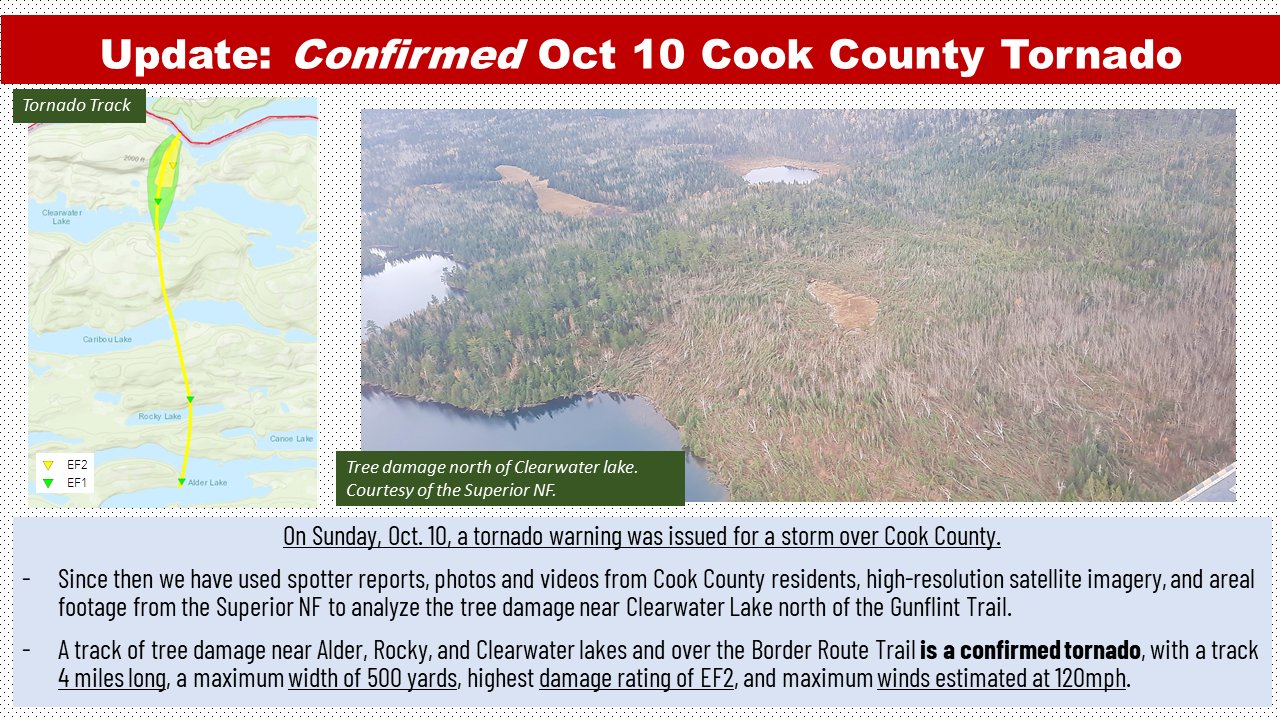 Tornado damage snapshot from the Duluth National Weather Service, as posted on Twitter.

On Sunday, October 10th, a rather strong tornado plowed through a swath of the Superior National Forest in Cook County, making it Minnesota's farthest-northeast tornado known to have occurred so late in the season.

The National Weather Service forecast office in Duluth used a combination of spotter reports, video, aerial photographs, and satellite imagery to confirm this remote, northwoods vortex. Analysis indicates the tornado traveled approximately four miles, from Alder Lake, to Rocky Lake, to Clearwater Lake, and then crossed Mountain Lake into Canada. The tornado's maximum width on the ground exceeded a quarter-mile, with winds estimated up to 120 mph, making this an EF-2 tornado on the Enhanced Fujita damage scale.

The tornado formed in conditions that were conducive to the development of severe thunderstorms and tornadoes. A strong low-pressure system and upper-level disturbance pivoted northward through western Minnesota, pulling moist and unstable right up to the Canadian border. This system had produced a mini-outbreak of small tornadoes in South Dakota and Minnesota one day earlier, and the ingredients for tornadoes improved in many ways as the system turned northward.

The Storm Prediction Center had indicated a slight risk for severe weather and tornadoes earlier in the day, and issued a Severe Thunderstorm Watch as severe weather became more probable. The Duluth National Weather Service had issued a Tornado Warning for Cook County at 5:36 PM,  34 minutes before the tornado struck. No tornado was reported during the duration of the warning, because of a lack of spotters deep in the northern forest, but later analyses indicated the tornado was on the ground from 6:10 to 6:20 PM. It took more than two weeks for the National Weather Service sift through the evidence and confirm this tornado.