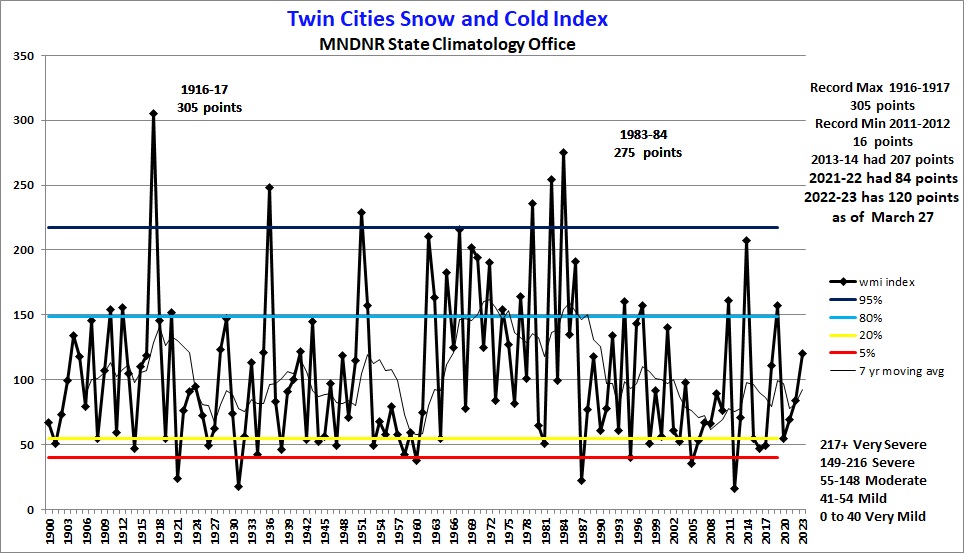 Were the winters when you were young worse than they are now? You may be able to prove it with the Twin Cities Snow and Cold Index.

The Twin Cities Snow and Cold Index (SCI) is an attempt to weigh the relative severity of winter when compared with winters of the past. The SCI assigns single points for daily counts of maximum temperatures 10 degrees F or colder, and daily minimums of 0 degrees F or colder. If the minimum temperature drops to -20 degrees or colder greater, eight points are attributed to that day. Snowfall totals of one inch or greater in a day receive one point. Four-inch snowfalls generate four points for the day, an eight-inch snowfall receives a whopping 16 points. To quantify the duration of winter, one point is tallied for every day with a snow depth of 12 inches or greater.

All current measurements are at the Twin Cities International Airport. A Year-To-Date comparison chart of the Index is also available.

Note, this could also be called the "Winter Fun Index" depending on your perspective!