Number of days with measurable snowfall through January 31 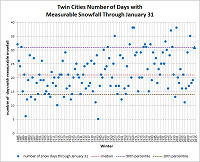 In addition to colder-than-normal temperatures, the winter of 2013-2014 delivered a large number of days with measurable snowfall to the Twin Cities through January 31. While relatively few of the snowfall events were large, snowfalls were frequent and often ill-timed. Many of the winter's snowfalls occurred during weekday rush hour periods.