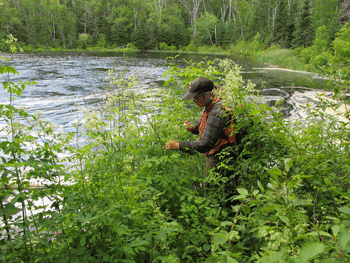 In 1914, during the months of July, August and September, Ned Huff was working in the woods of northern Lake County. He was not a logger, but a botanist cataloging the early flora of Minnesota. During this time period, Professor Ned Huff (respectfully referred to as Ned from this point forward) collected approximately 250 plant specimens from the North Kawishiwi and South Kawishiwi River area. On July 6, 1914, he made the first collection of purple meadow-rue (Thalictrum revolutum) in Minnesota. Typical of the time period, specific information relative to the plant's location and associated habitat was vague. We were basically provided the date, the river's name and "swamp" for the habitat description. Such brevity of detail presents an added challenge to botanists attempting to relocate a historic plant discovery. 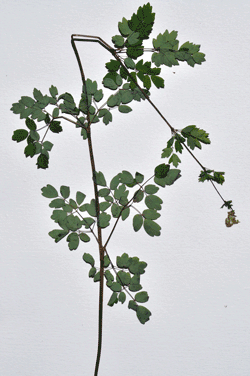 It appears that purple meadow-rue was not collected again in the state until June 24, 2008, when it was observed by Minnesota Biological Survey (MBS) staff growing along a small, open canopied stream in the Boundary Waters Canoe Area Wilderness (BWCAW) in St. Louis County. The species was growing with tall meadow-rue (Thalictrum dasycarpum), a commonly occurring plant in the area. Both species pretty much appear identical and it is not until careful observations are made with a hand lens that one might detect tiny, stalked glands on the undersides of the leaves and portions of the inflorescence. These glands are present on purple meadow-rue and absent on tall meadow-rue. Follow-up work back at the lab using a microscope with higher magnification and good side lighting aids in observing the glands and provides more confidence in species identification.

On June 18, 2012 a return trip was made to the North Kawishiwi River in pursuit of Ned's long lost purple meadow-rue. Heavy storms were in the forecast and the skies were dark and threatening as my partner and I began our paddle into the wilderness. There was nothing leisurely about our paddling and portaging as we had our sights set on a campsite that would provide us our perceived botanical vantage in the days ahead. Upon reaching the campsite, the tents and tarps went up quickly and, as if on cue, the storm let loose. Our first day of botanizing was spent hunkered beneath the tarp observing the forest and all its flora toss in the wind and soak itself in some 8 cm of rainfall.

In the days that followed, we approached every patch of meadow-rue we could find. No potential purple meadow-rue was going to evade our efforts. We soon were reminded just how common, the common tall meadow-rue actually was in the area. As we waded into each new patch of Thalictrum, we would swing up our hand lens and begin to look for those tiny glands. Find a plant, snip a leaf, stretch it out over your finger, find the best backlighting, and peering through the lens look for the glands. "I see flat hairs." "These hairs are short." "These ones are longer and many of the hairs are divided into segments." "Are these glands?" After several days of intensely doing this it was as if we were standing in a field of poppies and not quite as confident of what all we were seeing. We would often share our leaves with one another and ask for second opinion. Yes, we were having fun in the bugs but maintaining focus and keeping an eye on the prize. We were determined and not going to let Ned down in our pursuits. In some sense, we wanted to find a purple meadow-rue and allow ourselves to be transported back in time those hundred years, to somehow stand there in the swamp with Ned and the long lost purple meadow-rue bridging time and space with a moment of euphoria. 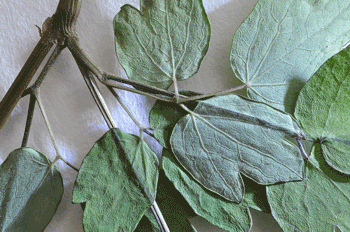 On June 23rd, in the mid-morning, we landed in our canoe along the shores of the river and got out to inspect another patch of meadow-rue. Leaf samples from the immediate shoreline all appeared to be within the range of hairiness of those sampled previously on our trip. As we looked closely at a leaf from a plant maybe 2.5 meters inland from the water line, there was some uncertainty about what we were observing. "These look different." The bottom of the leaf had very short hairs that appeared to possibly have some swollen knobs or glands at their tips. But things were small and difficult to clearly see so no definitive identifications were derived. We collected a plant, made some notes about it, and later that day arranged it in our plant press mentally registering it as being suspect. From that time on during our trip, we never knew for sure if we had found Thalictrum revolutum. We did say though that other than the "one" we had in our press, we had not seen any other purple meadow-rue. As a result, there was no spontaneous celebrating, hooting or hollering that took place for finding our prized meadow-rue during our trip. What was ours was the genuine satisfaction that accompanies a day of good physical work in the wilderness, a diversity of specimens nicely arranged in the press, and time spent afield with a determined and kindred companion.

As for Ned Huff, my partner and I carried a ledger of the plants that the professor had collected during his 1914 excursions. At times during our trip we would read his species list aloud and acknowledge those species as we moved about our day of exploration. It provided both motivation and inspiration. We also read from his list one night after supper. It was at these times I felt our connection to Ned, a renewed passion for field botany, an appreciation and respect for time and ancestry, and hope that others will have the same opportunities to explore wild places in search of something as seemingly simple and yet beautiful as a flower. I understand that Ned was both a good botanist and noted educator on Minnesota plant life at the University (1906-1945). Seems to me we are still benefiting and learning from his many botanical contributions.

To my knowledge, these are the only documented locations of Thalictrum revolutum found in Minnesota with the exception of a collection from St. Louis County dated June 27, 1971. The voucher is located at the Bebb Herbarium - University of Oklahoma. The voucher (Siegler & Dusek DS 4511) provides few details but was collected from the Eveleth area near a lake. Its current status is unknown and future investigations seem warranted. 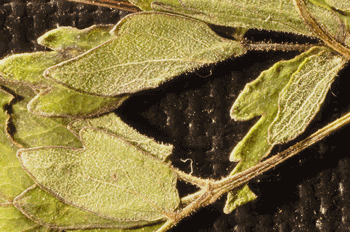 Special thanks go to M.J. Bach and D.L. Gerdes for being wonderful wilderness companions and especially for always being so willing to share their passions for ecology, learning and education; and to A. A. Reznicek of the University of Michigan Herbarium in Ann Arbor for providing determinations of our recent Thalictrum collections.

Additional MBS field observations can be found on the survey's web pages. Several suggestions to get you started at the site include: News from the Field and MBS Highlights.

Bartlett, S. L. The History of the Department of Botany 1889-1989. University of Minnesota.

Voss, E. G. and A. A. Reznicek. 2012. Field manual of Michigan Flora. The University of Michigan Press. Ann Arbor.