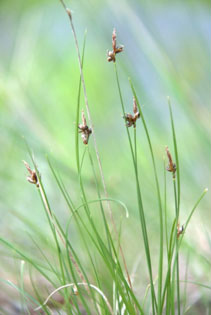 On June 3, 2009 Michael Lee and I were out botanizing a prominent cliff near the U.S. and Canadian border. It was well understood that we were not the first to explore this feature, for the area's rich botanical history is well told on the pages of botanical journals and well preserved on herbarium sheets at the University of Minnesota and Minnesota-Duluth Herbaria. Early accounts reveal this cliff was first explored by botanists some 120 years ago. For it was in 1889, when F. F. Wood was scrambling high upon these very bluffs when he collected for the first time in Minnesota the small grass like plant, weak arctic sedge (Carex supina ssp. spaniocarpa). Although many determined botanists have revisited this cliff over the years, none have had the pleasure of setting eyes upon Mr. Wood's elusive discovery.


Fred K. Butters and Ernst C. Abbe, two prominent botanists from the University of Minnesota, were among those seeking the rediscovery of this plant in Minnesota. Although their explorations were not able to relocate the weak arctic sedge population that Wood first discovered, on June 25, 1936 they were successful in finding a second occurrence of weak arctic sedge on another cliff 17 miles distant. Over the years, an array of botanists studying our state flora have explored the cliffs of north eastern Minnesota in pursuit of this species. However, neither of the populations have ever been seen again nor had any additional populations of the species been discovered in Minnesota. 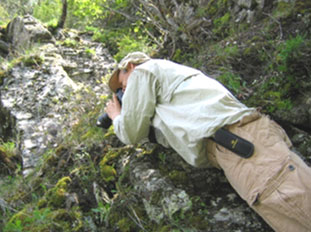 We have studied plant specimens at our university herbarium, read journal articles and floristic keys, and swapped stories with botanists from other states and Ontario in effort to gain a better understanding of the ecology of this sedge. When to look, where to look, and what to look for are the basic questions we ask ourselves when trying to locate a plant species in the field, but even when the best efforts are put forth, the plant you are seeking must first be there, and then "willing" to expose itself to your passing glance and consciousness.

And so, it was a sunny Wednesday afternoon in early June that Mike and I were out and about botanizing Wood's cliff. Botanizing a cliff involves a constant assessment of which vertical chutes warrant climbing and which horizontal shelves and ledges permit closer investigation, an assessment of our safety and determination if our scrambling will cause damage to the cliffs fine, crumbly soils and vegetation. There is no reward or satisfaction to be gained in discovery, if while in its pursuit, one damages or destroys the habitats and treasures being sought. 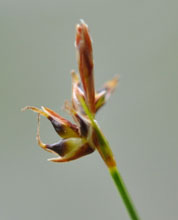 We leap-frogged around each other for several hours, ascending successive chutes and calling out to each other whenever there was an interesting observation to report before Mike said, "I think I've got something suspicious here". From his position 25 feet up, Mike sent down a small tuft of a fine leaved sedge whose fruiting parts had not fully matured. Though we had our hunches, we pondered this specimen and the loose patch of plants from which it came for a few minutes not exactly sure what to make of it. A search of the immediate vicinity was conducted with a bit of renewed vigor. A second patch of plants was observed nearby but out of reach in an inaccessible chute before Mike gained access to yet a higher population by scrambling up a series of narrow shelves. It did not take me long to ascend to this location. There on the side of the cliff, on this small isolated shelf, were more fine tufts of narrow leaved plants, some of these more mature with characteristic shiny, reddish-bronze perigynia. It was then, amongst this cliff side population that we calmed ourselves long enough to fully observe the sedge and pull a copy of the Manual of Vascular Plants from our daypack. As I read the dichotomies aloud from my shelf, Mike, perched on a ledge above, described his observations until we worked our way through the key and derived our conclusion: Carex supina. One must not get reckless about identifications though; after all, we had never seen it in the field before and assorted other similar looking sedges occur frequently on the cliff. So, we keyed it again and came to the same conclusion. We then took turns looking closely at the sedge, imprinting it and its place into our memory. We took our habitat notes, GPS readings, pictures, and made a small but adequate plant collection from a portion of the population. 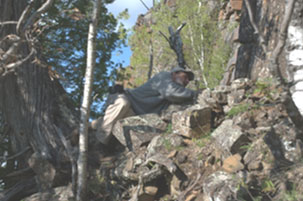 As we looked out from our perch onto the open expanse of river, lakes and forest below, a full fledged rush came over me. Was it the thrill of the discovery? Was the breeze laced with the energies of Wood, Butters and Abbe and the countless other botanist and colleagues that have shared in the pursuit of this elusive sedge? Or was it the joy of knowing this tiny sedge, the weak arctic sedge, was still hanging on, still surviving on the side of this cliff not just for a period of some 120 years, but possibly since the glaciers receded from the area some 10,000 years ago.

Weak arctic sedge occupies a broad circumpolar range and typically occupies rocky and sandy substrates in the far arctic regions. Outside of Alaska, the Minnesota records represent the only known occurrences of this species in the United States. Two additional populations, within 3 miles of the extant Minnesota population, are known from Ontario where the species also occurs as isolated cliff populations.

Carex supina is a perennial herb; 8-30 cm tall. It is long rhizomatous forming loose tufts. Plants are reddish tinged at the base. Leaf blades are 3-15 cm long, 1.0-1.5 mm wide and scabrous margined. The inflorescence typically has 2-5 spikes with the terminal spike being entirely staminate. The pistillate scales are reddish brown with hyaline margins. Perigynia are glossy, dark reddish-brown above and yellowish-green to reddish-brown near the base. The perigynia are 2.5-3.3 mm long and 1.2-2.0 mm wide with beaks 0.4-0.9 mm long. 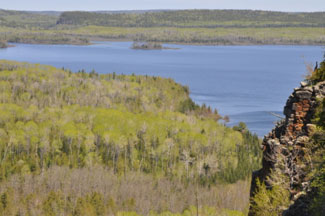 Weak arctic sedge is best searched for during June and July. This species typically flowers and fruits early in the season. Shortly after, most of the distinctive perigynia fall from the plant making both recognition and identification of the species much more difficult.

Although this arctic species may have persisted at its southern location in Minnesota since the glaciers receded some 10,000 years ago, climate change and other human induced influences (e.g., development, recreation, non-native species) are primary threats to its continued persistence. Although we may not be able to say today what the greater role this species contributes to human kind, we do know it is part of our planet's greater web of life that we are all intricately dependent upon.

It is our hope that in 120 years from now, other botanists will have the privilege of experiencing the weak arctic sedge in Minnesota. To find themselves perched on a small foothold, on the side of a grand cliff and overlook the beauty and serenity of the wilderness landscape of river, lake and forest below.