Algae-like pondweed (Potamogeton confervoides Reichenbach) was documented for the first time in Minnesota on June 25, 2008. The Minnesota population represents a western range extension of the species. A small population was discovered in a small bog lake within the Superior National Forest's Boundary Waters Canoe Area Wilderness in northern St. Louis County. The population observed was restricted to a small area near shore, submersed in shallow (~50 cm) water, and was just beginning to flower. Associated plants included Brasenia schreberi and Utricularia sp. The pond (Figure 1) was completely surrounded by a floating mat of Graminoid Poor Fen (APn91b).

Algae-like pondweed is a perennial, aquatic plant considered endemic to North America, occurring primarily in northeastern U.S. and adjacent Canada. Although some populations reportedly contain 1,000s of plants, assorted other locations consists of only few, scattered individuals. The plant is globally ranked as G4-apparently globally secure and occurs in eastern Ontario, where it has a Provincial rank of S2-imperiled. It is known to occur in Wisconsin and is listed as a Threatened species. The species also occurs in Michigan and is tracked as Special Concern. 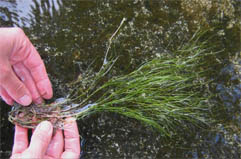 Potamogeton confervoides is one of twenty-seven species of pondweed (Potamogeton-24 spp. and Stuckenia-3 spp.) that are known to occur in MN. The plant (Figure 2) is recognizable by its very narrow, threadlike leaves (0.1-0.5 mm) and capitate inflorescence (rather tightly clustered group of flowers/achenes) located atop a long peduncle (5-25 cm). Unless one is already familiar with the species, accurate identification requires close examination and the use of a botanical key.

Plants occur in acidic or soft waters of lakes, streams, bog ponds, pools, peaty depressions, etc. Plants may occur in waters having pH as low as 4.0. Potential threats to the species include destruction of habitat and physical, chemical or hydrological alteration of habitat conditions.

Voss, E. G. 1972. Michigan Flora. Part I. Gymnosperms and Monocots. Bulletin of the Cranbrook Institute of Science and University of Michigan Herbarium. 488pp.