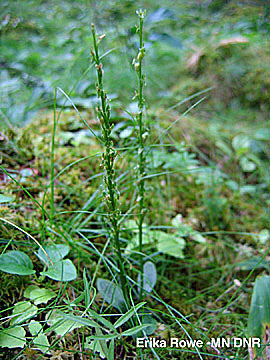 Bog adder's mouth (Malaxis paludosa) (L.) Sw. - Due to its rarity and chameleon-like ability to blend into the surrounding vegetation, bog adder's mouth (Malaxis paludosa (L.) Sw.) has proven to be one of the most elusive species of orchid native to Minnesota. The orchid's small stature and greenish color make it easy to overlook among the mossy hummocks within the swamps in which it typically grows. Often, the only sign of its presence is the delicate inflorescence rising a scant 5-10 cm above the moss. Populations also tend to be very small, often less than 10 plants at a site and rarely more than 20. This elusiveness has often earned bog adder's mouth the reputation of being one of the rarest orchids in North America.

Prior to 2005, the number of known populations in Minnesota amounted to only a handful distributed across four northern counties. The orchid was unknown in North America until 1904 when H. L. Lyon collected the first specimen in Otter Tail County somewhere near New York Mills. The next record wouldn't occur until 1915 in Clearwater County, followed by discoveries in 1924 and 1927 (also in Clearwater County), and in Hubbard County in 1934. Following this period of initial discovery no new populations were found until 1981, this time in Beltrami County. The last documented occurrence was in 2000, also in Beltrami County. Beyond Minnesota, the only state within the contiguous U.S. to have any documented populations, this circumboreal species has been found in scattered locations in Alaska and Canada, and in Eurasia where it is considered less rare. 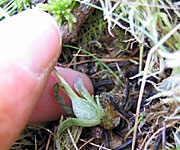 The pseudobulb of bog adder's mouth

While conducting vegetation and rare plant surveys in Becker County during the field season of 2005, Michael Lee, an MBS plant ecologist also working in west-central Minnesota, and I identified five new locations with populations of bog adder's mouth. During our 2006 field season, four additional locations in Becker County and two in Hubbard County were found (one of the Hubbard County populations was discovered by MCBS Plant Ecologist Tim Whitfeld). These new sites have extended the known range of bog adder's mouth and increased the documented records to 17 locations in Minnesota; however, three of the historic populations have not been relocated.

Flowering begins around mid-July and lasts through the end of August, producing 10 to 29 very small, greenish-yellow flowers that have a faint blue-green striped lip. These flowers twist 360° so that the lip, or labellum, is uppermost of the perianth parts, as it would be if the flowers were not twisted at all. Most orchids twist 180° so that the lip is lowermost in the flower. Stems arise from a pseudobulb (a swelling at the base of the stem) and are typically 7-15cm long (including inflorescence). The basal parts of the plant consist of the pseudobulb, which is covered by the bases of two to five alternate leaves. An interesting adaptation of this orchid is its ability to develop tiny vegetative propagules called foliar embryos at the margins of its leaves that are capable of growing into new adult plants once the leaves drop. How often or effective this process is in producing a new plant is not known. The only insect observed carrying pollen from this plant has been a species of fungus gnat, Phronia digitata.

Status in Minnesota - Bog adder's mouth is listed as an Endangered species in the State.