This species was first documented in Minnesota from northern Cook County in 1999 (Gerdes 2001). Rough-fruited fairybells typically occurs in the northwestern and western regions of the U.S. and Canada. According to Judziewicz et al (1997), the nearest populations of this species to Minnesota are Isle Royale, Michigan; James Bay, Ontario; and Pembina County, North Dakota. Apparently, the three historic locations in Ontario have not been relocated in the past 25 years. (Oldham 2000). 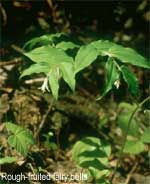 Rough-fruited fairybells should be searched for in mid-May to late August. This species flowers around mid-May. The fruits, strikingly reddish-orange in color, have been observed remaining on the plants in mid-August. True to it's common name, under magnification the surface of the fruit is distinctly rough and wart-like. Sterile plants can be difficult to discern from rose twisted-stalk (Streptopus roseus) and other members of the lily family (Liliaceae).

Note: This plant was found during a floristic investigation of the Rove Slate Bedrock Complex Landtype Association in northern Cook County, MN. This graduate study received support from Michigan Technological University, the Superior National Forest, and the Minnesota Biological Survey.