The DNR defines old growth forests as forests that have developed over a long period of time, essentially free from catastrophic disturbances. They contain large, old trees of long-lived species that are beyond traditional rotation (harvest) age. High-quality old growth forests also have relatively complex stand structure (such as snags and woody debris), high stand mortality, and few invasive species. They also include rare species or native plant communities.

Black ash forests are found in wet areas such as narrow bands at wetland margins, in ground depressions that accumulate moisture, or where groundwater seeps to the soil’s surface. The most abundant trees in black ash forests are, not surprisingly, black ash. These grow in almost pure forests or are mixed with green ash, red maple, and sometimes bur oak. In northern Minnesota, black ash forests can include white cedar and balsam fir trees. Young black ash can become established and grow beneath their parent trees.

Old growth black ash forests are at least 120 years old but may be 200 years old or more. The size of trees varies depending on the soil moisture and latitude of a site; they can grow to be 15-20 inches in diameter. 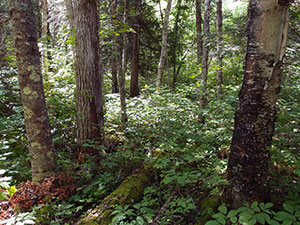 Lowland hardwood forests are found in stream and river floodplains and in swamp settings away from flowing water. The kinds of trees that grow in this forest type vary from south to north. In southern Minnesota, lowland hardwood forests consist of silver maple, American or red (slippery) elm, and green ash trees together with a large variety of other tree species. In the northern part of the state, ash is the most common tree species, often growing with basswood and oak.

Characteristics of old growth lowland hardwood forests vary by location within the state. In addition to old and medium-aged trees, old growth lowland hardwoods will have some seedlings and young trees. Trees are at least 120 years old and may have diameters more than 10 inches.  It is rare to find species that require large amounts of light, such as willow, cottonwood, aspen, birch, and balsam poplar. 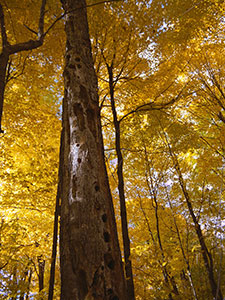 This forest type can be subdivided into maple-basswood forests in southern Minnesota and northern hardwood forests in northern Minnesota. These forests contain sugar maple, basswood, yellow, red oak, American elm, and black ash. The types of dominant trees depend largely on moisture: red oak is common in the driest sites, while American elm and black ash can be found on wet sites. Northern hardwoods also support conifers: white pine, balsam fir, white spruce, and white cedar. White pine was historically largely removed from northern hardwood forests because it was so desirable for wood products.

Northern hardwood old growth forests have the classic look of old growth forests. These forests appear dense with layers of vegetation. Seedlings and saplings grow vigorously, especially those of sugar maple. These forests perpetuate themselves over many centuries if they are not disturbed by severe storms or cutting. The young trees tolerate living for years in deep shade until a gap opens in the canopy. Then, the young trees under that canopy gap race upward to take the place of the fallen giant that previously occupied the space. Forests are at least 120 years old, and the oldest trees can live for 300–400 years. While tree diameters are often 10-15 inches, trees can grow to diameters of 20 inches in the north and 26 inches in the south. Species that require sun, such as aspen, are rare or occur in scattered, small clumps of a few trees. White pine and yellow birch were historically  favorite trees for building materials, and therefore they are much rarer than they were historically.

Oak forests grow in the driest landscapes. They are dominated by red oak and white oak, individually or in combination. Aspen, paper birch, and black cherry often grow with these oaks. In southern Minnesota, black oak, bur oak, bitternut hickory, and pignut hickory are prevalent. Oak forests will be invaded by northern hardwoods unless they experience some kind of disturbance (e.g., fire) that clears away old leaves, shrubs, and saplings. Oak forests are made up of species that do not tolerate deep shade. Such forests are known as "seral" forest communities: forests that transition to more shade-tolerant species over time.

The oldest trees in an old growth oak forest are often 150– 200 years old or older with diameters of 20 inches in the north and 30 inches in central and southern Minnesota. However, forests are considered old growth if they are at least 120 years old or have an average tree diameter between

10-15 inches. Nearly all oak forests in the state were pastures at some point. If the number of cattle in a forest was not excessive, an oak forest will have few nonnative species and only small amounts of shrubs bearing prickles and thorns. It will also support a diverse group of wildflowers, grasses, sedges, and shrubs. 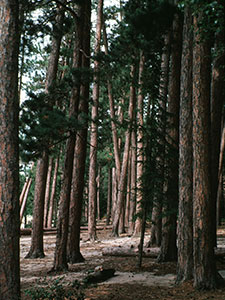 Red pine and white pine forests are largely restricted to northeastern and north-central Minnesota. The white pine subtype also can be found along steep slopes and knobs of creek and river valleys in the southeast. Red and white pine form a canopy either together or separately. White pine tends to grow on moister sites than red pine. Paper birch, red maple, and other deciduous trees occur with white pine on the moistest soils. On the driest sites, red pine is joined by jack pine; on moister sites, it is accompanied by white spruce or balsam fir. Historically, frequent surface fires and rare canopy fires perpetuated this type for many centuries, but in the absence of fire, maple, balsam fir, or white cedar will eventually take over on many sites.

Being somewhat tolerant of shade, white pine can grow beneath a pine canopy and its saplings will grow up to fill canopy gaps. Red pine, however, requires nearly direct sunlight in all its life stages. Formerly common, old growth red and white pine forests are now rare due to their high demand for building material from 1850 to 1920.

Old growth pine forests usually consist of distinct age groups that were established after a disturbance that cleared the ground of old needles, leaves, and brush, or opened the canopy. To be considered old growth, pine forests are at least 120 years old or have a tree diameter greater than 20 inches. Trees can be as old as 400 years with diameters of 3 feet or more. Most remaining pine forests have experienced some recent cutting. 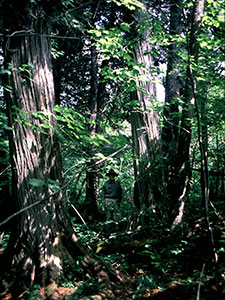 White cedar often grows in pure forests over large areas of moist soils. Cedar trees growing in swamp settings are not considered part of the upland white cedar type. These forests can contain extensive tracts of balsam fir, yellow birch, paper birch, white spruce, and black spruce. Upland white cedar forests are most common on Lake Superior's north shore, but occur throughout northeastern and north-central Minnesota. Although it is a long- lived and shade-tolerant tree, white cedar has difficulty reproducing itself.

Seedlings and young saplings are rarely found in old growth upland white cedar forests. One reason is that deer use white cedar forests for shelter in winter and eat young white cedar in the spring. To be considered old growth, these forests are at least 120 years old or have an average tree diameter greater than 10 inches. However, many trees are at least 200 years old, and commonly more than 400 years old. In one old growth forest, researchers found a cedar tree that was nearly 600 years old. Because their wood is dense, white cedar trees may not be large. The cedars often grow in clusters with spaces between them, giving the impression of an open forest. 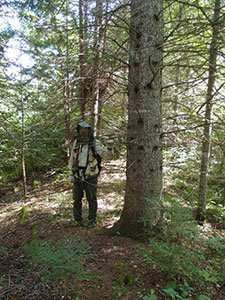 Along with white spruce, many other tree species can be found in white spruce forests, including balsam fir and paper birch. This type is restricted to north-central and northeastern Minnesota.

Because white spruce does not live as long as the trees of other forest types, these forests are considered old growth at 90 years old. The oldest trees can reach 150 years of age. During the lifetimes of the oldest spruce trees, several generations of balsam fir will have come and gone. As a result, these forest types are filled with small- and medium-sized pieces of fallen wood.