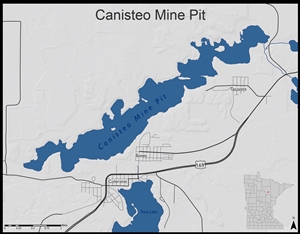 The Canisteo Mine Pit (Canisteo) is located north of the cities of Coleraine, Bovey, and Taconite in Itasca County, Minnesota. It is a pit lake formed in a complex of numerous inactive iron ore mine pits. 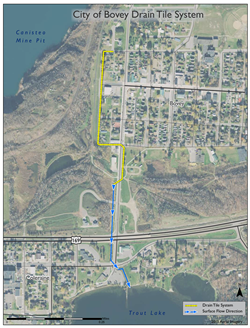 After iron ore mining and subsequent pit dewatering stopped, the pits began to fill with water from precipitation, surface water inflow, and groundwater inflow. In 2008, the DNR was allocated funds to address the rising water level of the Canisteo, including the evaluation of the surficial groundwater flow from the Canisteo, pitwall stability, and the construction of a potential outlet. First, design and construction of a Bovey drain tile system was completed in 2011. Design of the Canisteo outlet structure was subsequently completed, but construction of the outlet was cancelled because of budgetary constraints and a potential for mining operations to use water from the Canisteo.

As the Canisteo water level increased, the hydrologic connection between the water level of the Canisteo and the city of Bovey’s water table became evident. The effects from the already high water table in the western portion of Bovey were worsened by the rising water level in the Canisteo as water traveled through glacial sediment to the south. To decrease additional groundwater flow toward the city, in 2011 the DNR designed and constructed a drain tile system along 1st Avenue to divert groundwater to Trout Lake. The DNR is responsible for the continued maintenance of the drain tile system.

The Canisteo continues to gain water and will need an engineered outlet structure and route in the future to prevent flooding. To enable informed discussion with state leaders and legislators, a number of state agencies are collaboratively working to gather data. The initial data gathering will be to collect water quantity and water quality information from the pit as well as potential nearby surface waters which may be receiving waters in various designed outlet scenarios.

Future work may include but is not limited to continuation of water level monitoring, bathymetric surveying, installation of groundwater wells, surveying potential outlet routes. Additional work may also include a study to evaluate pitwall stability.

Once a preferred outlet location and route are chosen, future phases would include engineering a design and then construction. Future data gathering, engineering design, and construction would need to be funded before these phases of the project could move forward.