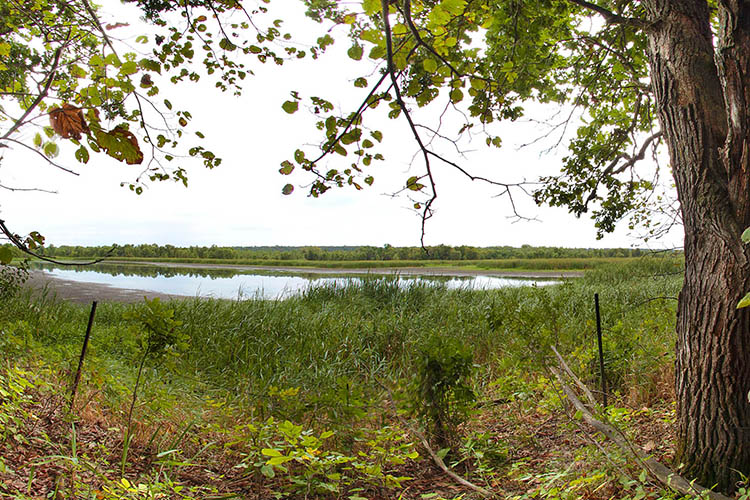 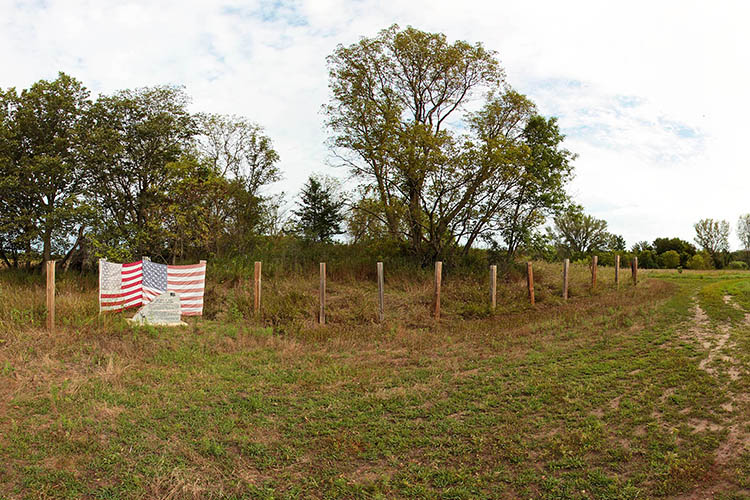 Located just south of Franklin, nearly 500 acres of prairie, woodlands, and bedrock are preserved through a Scientific Natural Area (SNA) and Wildlife Management Area (WMA). Wildlife can be viewed year-round on this site and hunting is allowed on the WMA. 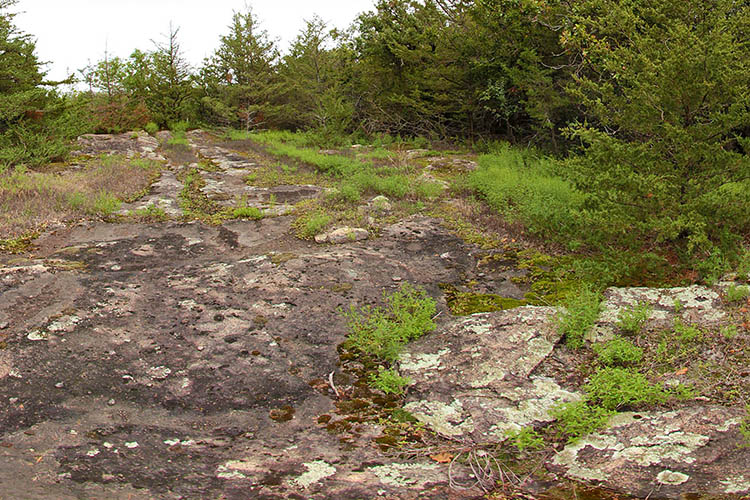 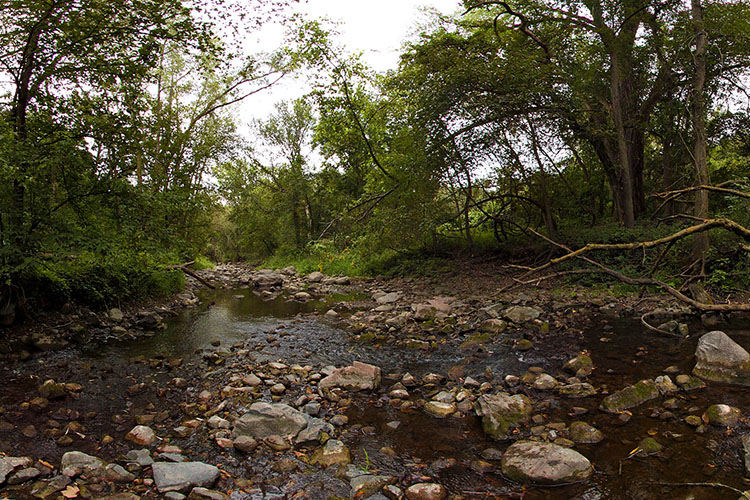 This WMA/SNA supports areas of native dry and mesic prairie, rock outcrops, flood plain forest, and oak woodland habitats. Many rare plant communities, which are threatened due to human activities, are represented at Cedar Mountain. 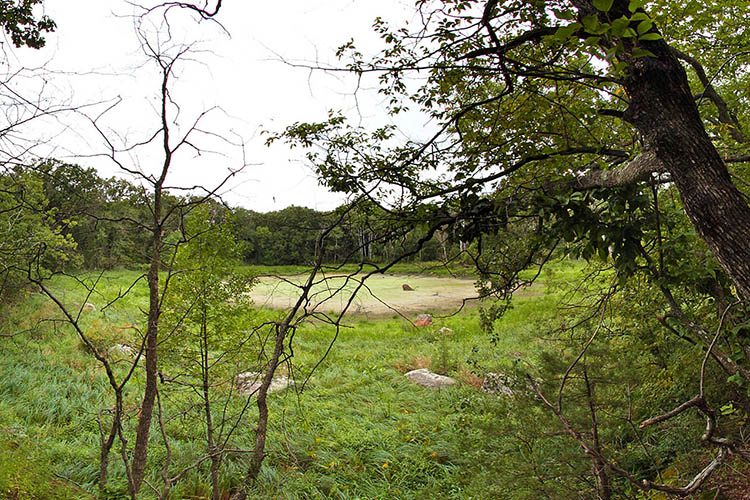 Rock Ring Around a Pond

This pond is surrounded by several tall knobs of Cedar Mountain Gabbro. The pond was likely formed by the slower weathering of massive, un-cracked portions of the gabbro that exist as knobs today. 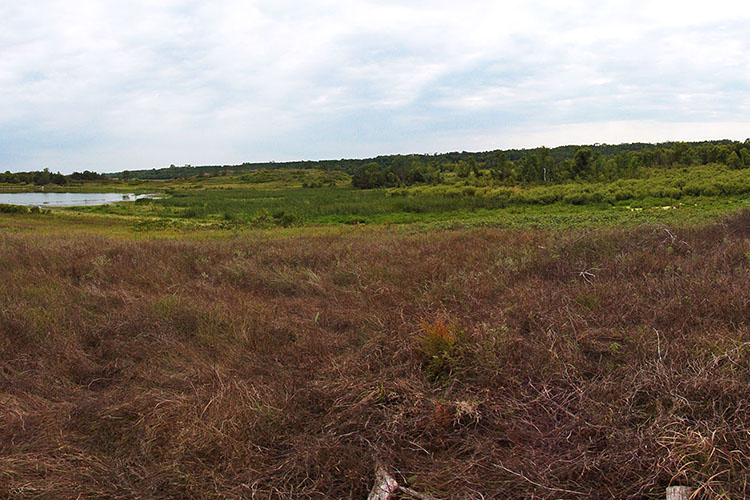 A man-made reservoir on the 640-acre Cedar Rock WMA, five miles northwest of Redwood Falls, provides abundant water for native plants and animals. Rock outcrops and prairies surrounding the reservoir include unusual plants such as the Plains prickly pear cactus.

Numerous rock outcroppings along this section of river provide a scenic glimpse into the past for hikers and paddlers. 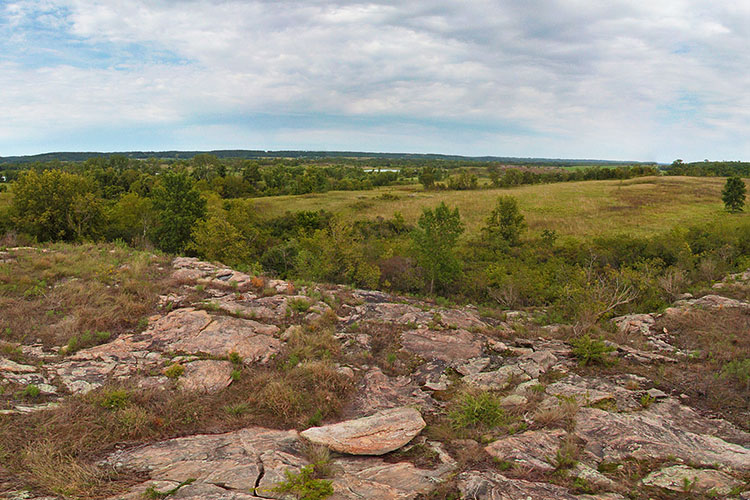 View of the Valley

A rock outcrop on the Cedar Rock WMA is the perfect vantage point for great views of the Minnesota River Valley. Beginning about 11,000 years ago, the valley was carved out of the landscape over a period of 3,000 years as the mighty River Warren drained Glacial Lake Agassiz at the end of the last Ice Age. The valley is up to five miles wide and 250 feet deep. 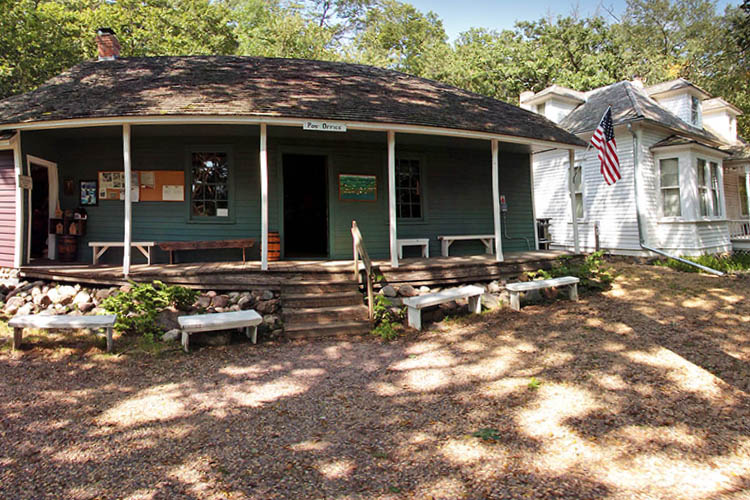 The Harkin Store State Historic Site is all that remains of West Newton. Alexander and Janet Harkin, born in Scotland, came to West Newton in 1856. They became successful farmers and opened the store in 1867. Alexander also served the community as post master, justice of the peace, coroner, and school board treasurer. 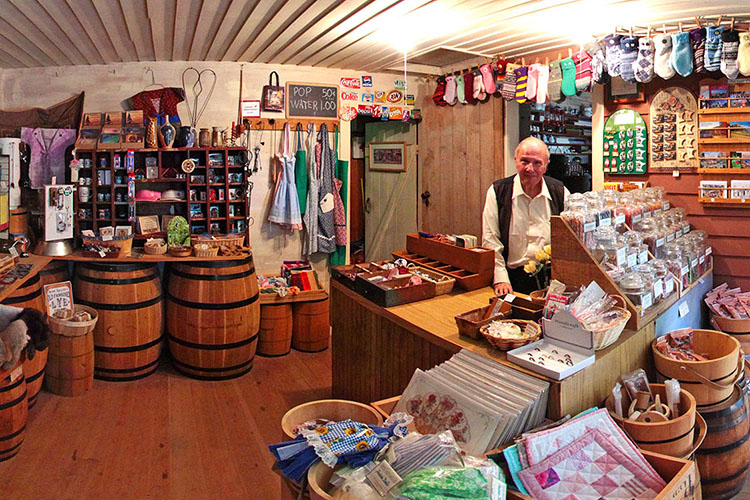 The Harkin Store State Historic Site is managed by the Nicollet County Historical Society. There is an admission fee for non-members. The site is open seasonally and hosts many wonderful events. The gift shop is a great place to find handmade items and unique gifts. For more information find us online, or call 507-934-2160. 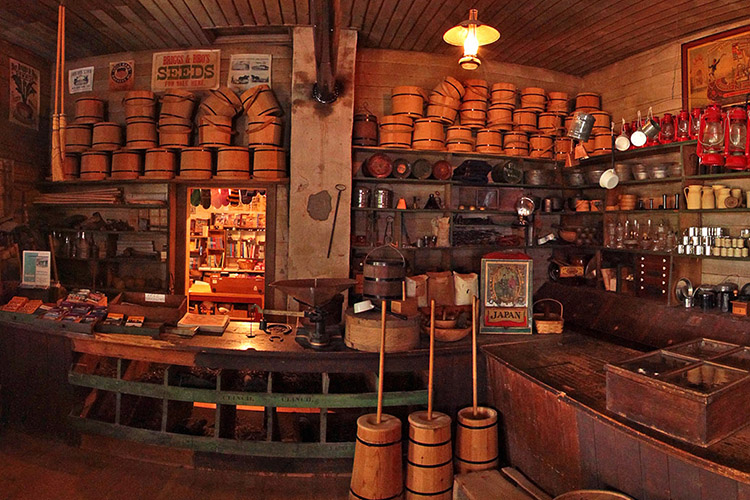 The shelves of the store are still filled with some of the original inventory. The store was a resource and gathering place for area residents where they picked up their mail, bought foodstuffs, and purchased anything from square nails to sundries. The store served about 150 families and sold about $3,000 worth of goods annually in the first half of the 1870s. In the years that followed, sales suffered greatly because of grasshopper plagues, financial panics, and fewer residents. The store finally closed its doors in 1901. 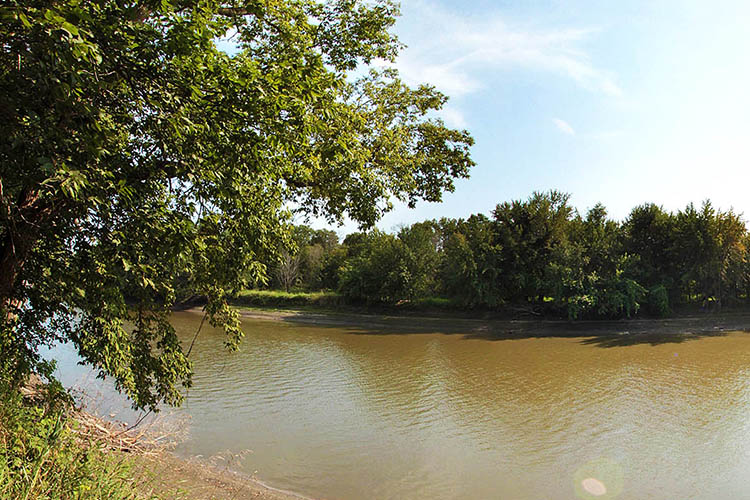 Once a thriving riverboat stop, West Newton boasted more than 120 residents in 1860. That population tripled in the decade that followed. The cosmopolitan community had residents from Scotland, Germany, Austria, Switzerland, and elsewhere. Only a quarter of the population had been born in the English speaking world. Steamboat traffic ceased after 1874. Later bypassed by the railroad, settlement in West Newton dwindled to a few families. 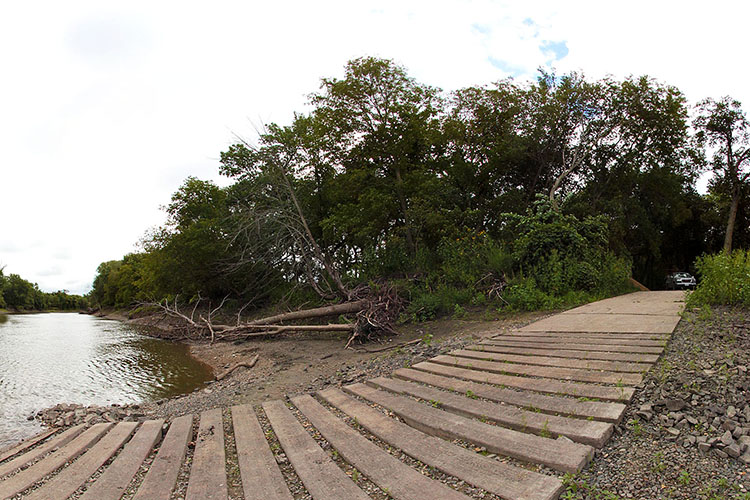 Day Trip on the River

Kettner’s Landing, just two miles upriver from Fort Ridgely State Park, provides a great drop point for a short paddle on the Minnesota River. A concrete plank extends into the river and aids landing boats with or without motors. 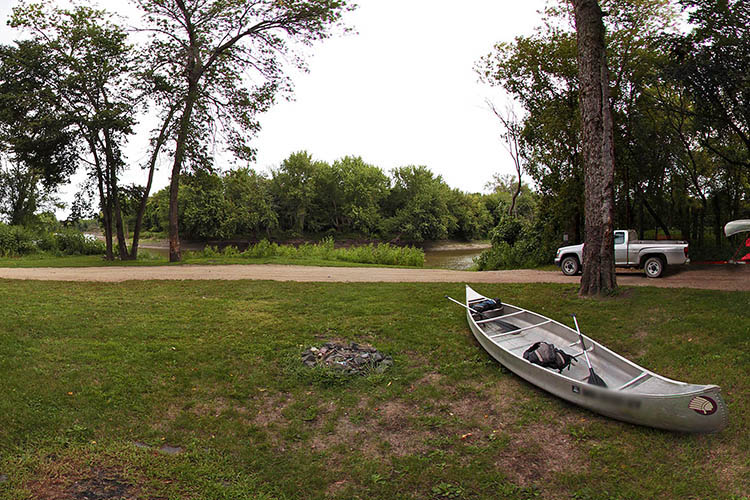 Room for a Crew

Ample parking at Kettner’s Landing provides space to land a variety of watercraft and can accommodate groups paddling the river together. A mowed, grassy area and a fire ring provide a place to relax once the boats are loaded for the day. 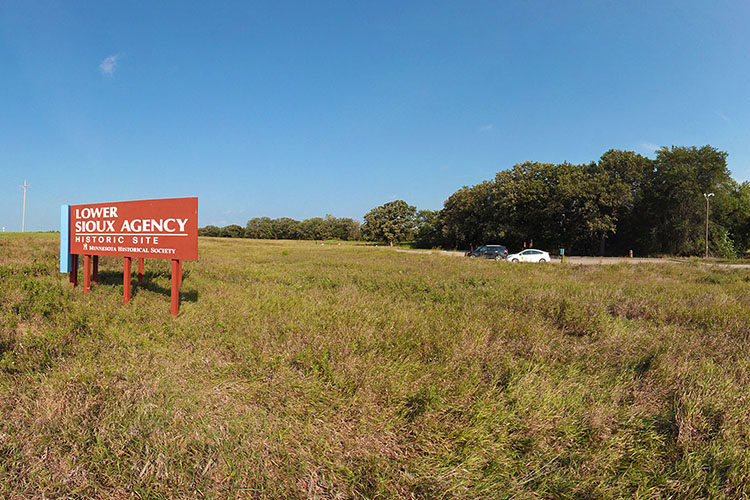 In 1851, the United States government signed two treaties with the Dakota Indians in Minnesota. With the two treaties, the Dakota ceded about 24 million acres of land to the government and moved onto reservations in the upper Minnesota River Valley that were approximately 950,000 acres. The Lower Sioux Agency was one of two government agencies created to oversee reservation activities and operations. 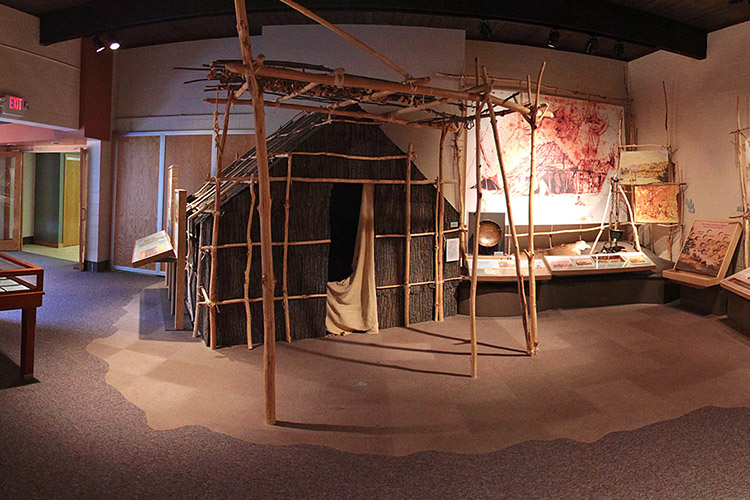 Today, this site is operated by the Minnesota Historical Society as one of 31 sites in the State Historic Sites Network. Programming at the site tells the history of the Dakota in Minnesota, the agency’s operations, and how the government implemented its Indian Policy. Exhibits, audiovisual programs, and special events are all used to share these stories. 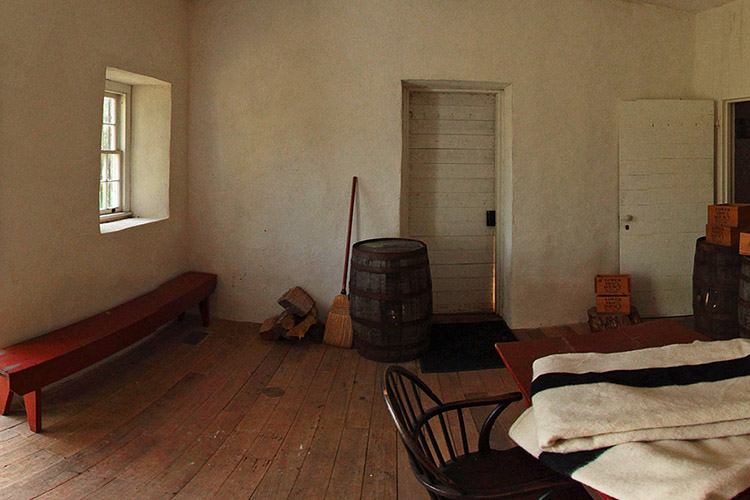 Of the numerous original buildings at the agency, only the stone warehouse (the interior of which you see here), survived the U.S. - Dakota War of 1862. This larger and sturdier stone building replaced the original log warehouse located near the river at the ferry crossing site. The warehouse stored annuity goods such as food, farm implements, and building supplies that were promised to the Dakota in the 1851 treaties. The warehouse also served as the office for the Agency Superintendent and Indian Agent. 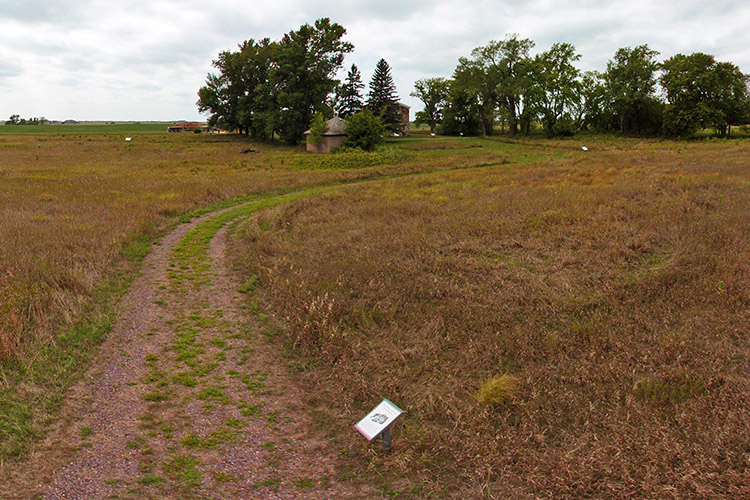 A walk along this prairie trail takes you through the area where most of the original agency buildings were located. Besides the stone warehouse, other agency buildings included a school, doctor quarters, blacksmith and carpenter shops, stables, boarding house, and more.  In 1862, about 150 people lived and worked at the agency, which was then the largest white settlement upriver from New Ulm. Interpretive panels are located throughout the area to show where buildings were located and what functions they played in agency operations. 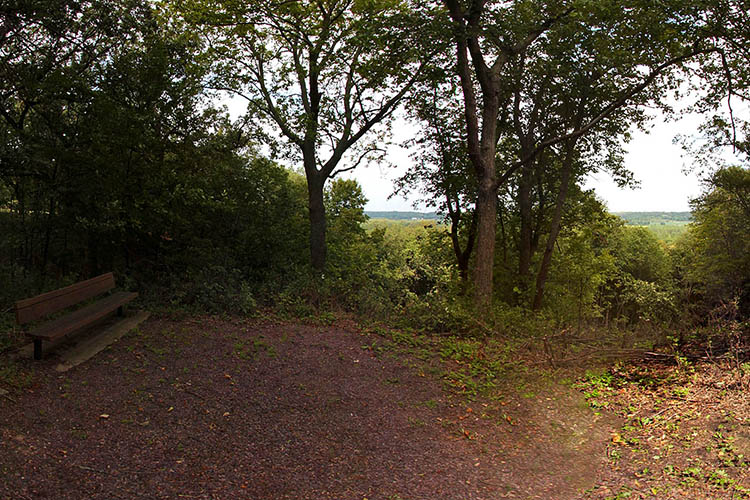 This overlook provides a beautiful view of the expansive Minnesota River Valley.  In the 1860s, the Minnesota River was the primary source of transportation for people and goods coming from points east. The valley was also the primary source of trees that provided lumber for buildings, fuel for cooking and heating fires, and habitat for the abundant wildlife. All of these necessities were essential for the people who called this area home. 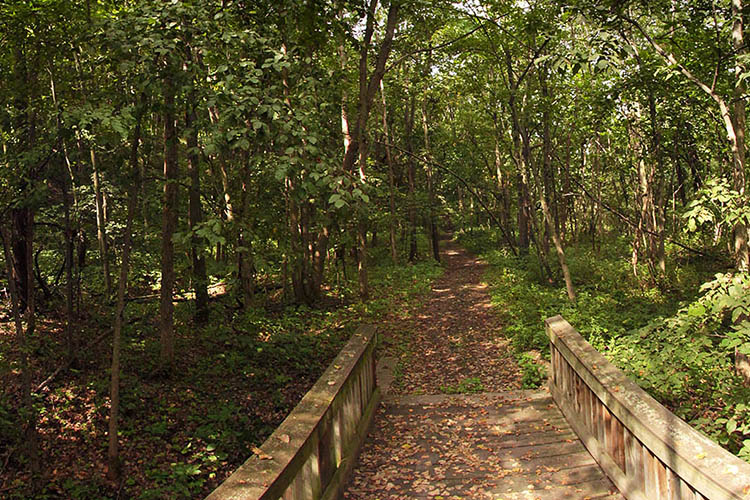 A series of cartways and roads connected the agency operations on the bluff top to the river below. At this point, you are at the beginning of one of the agency roads that took people and goods from the ferry crossing up to the east and west ends of the agency. You can get a personal feel for the variety of trees and vegetation that was typical at the time of the agency operations. You may also hear birds and see wildlife native to the area. 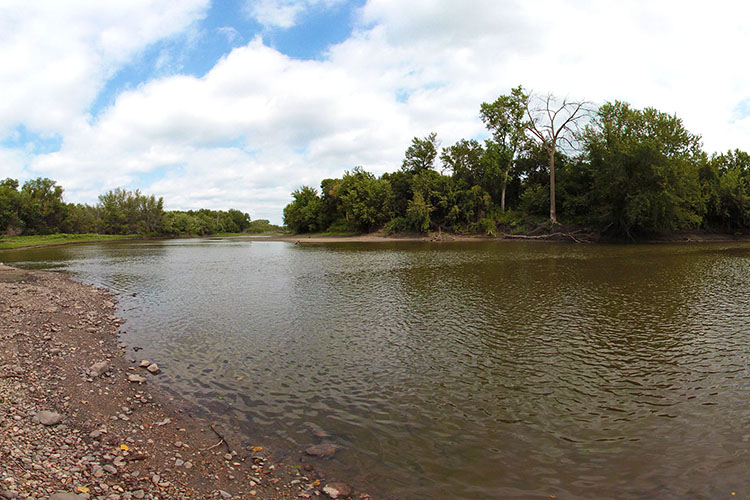 The Redwood Ferry was one of two ferry crossings on the upper Minnesota River. Here, roads converged that went west to prairie settlements and east to Fort Ridgley, Henderson, and on to St. Paul. The river and these roads provided access and movement for the people who lived in and traveled through southwestern Minnesota. It was also at this location that Captain March and his detachment of soldiers from Fort Ridgely was attacked on August 19, 1862, the first day of the U.S. – Dakota War of 1862. 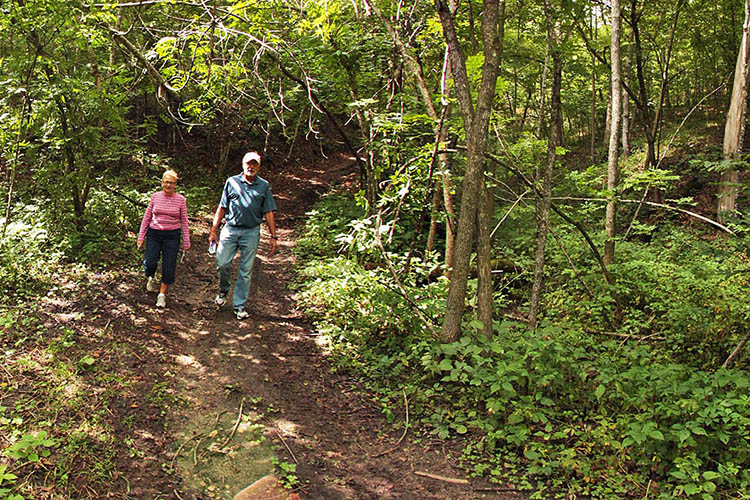 At this location, the intersection of prairie grasslands and river valley woodlands provides dramatic views of two entirely different and diverse ecosystems. A walk along this trail will take you towards the west end of the site. Imagine this area as a sea of 5-8 foot tall prairie grass, just as it was when the agency was established. You will see native grasses and wildlife along this trail as well as interpretive panels that tell about life at the agency. 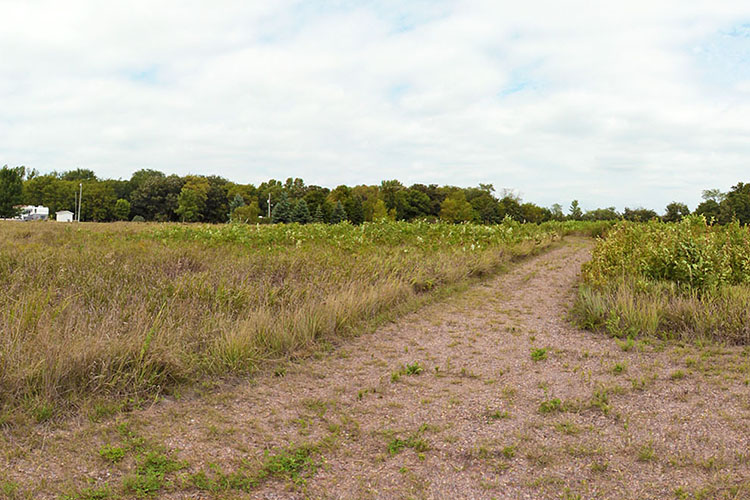 The agency was not only home to government employees, but also to people who were trading with the Dakota. At the time of the war, there were four traders conducting business with the Dakota. By this time, the fur trade in Minnesota was mostly at an end, but the Dakota were using an increasing quantity of metalware, cloth, and firearms as a part of their daily lives. These goods were acquired through the traders. 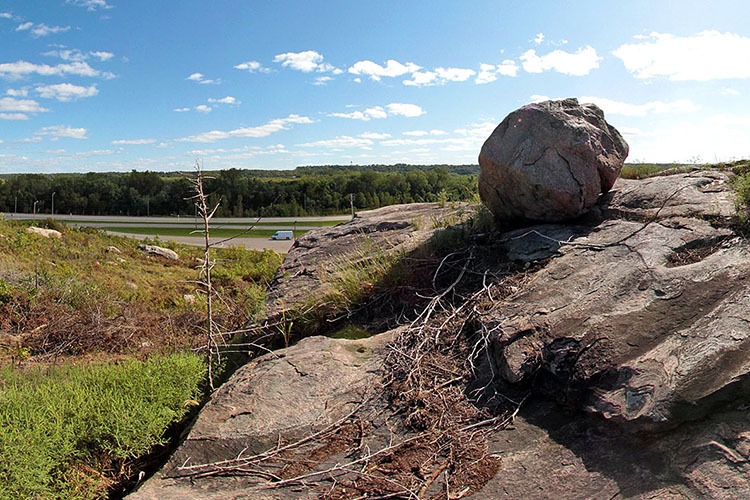 The Morton Outcrop SNA is on a massive, high bedrock knob along the Minnesota River and contains one of the best examples of Morton Gneiss to be seen in the world.  Dated at around 3.4 billion years of age, this gneiss is one of the oldest rocks known at the earth’s surface. 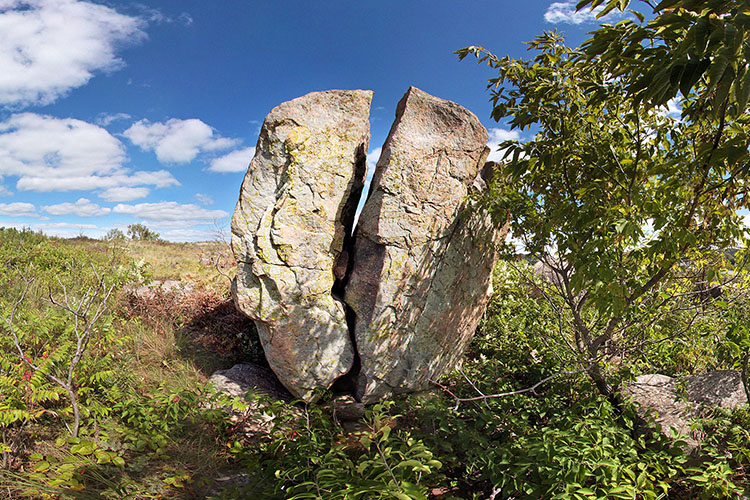 A Restoration in Process

The Morton Outcrop SNA is being restored through the removal of invasive woody cover and prescribed burning.  This is the locality from which the Morton Gneiss rock type was first described. Morton Gneiss is recognized by its distinctive swirls of chocolate brown and pink colors. 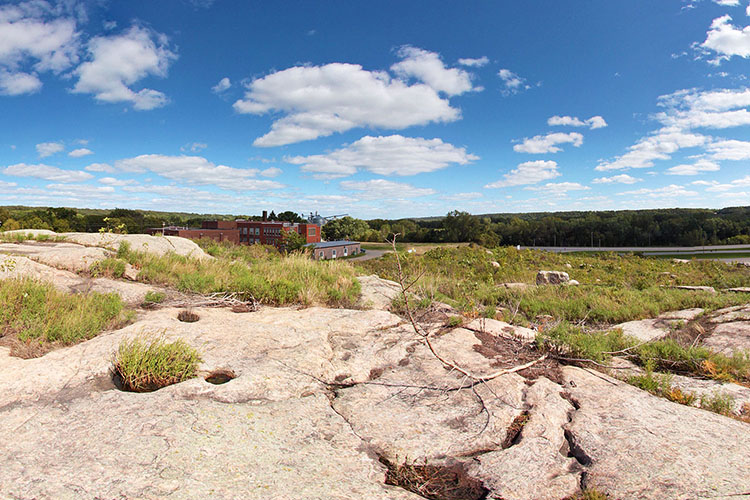 Between 150 and 200 species of specialized plants can be found at this site, including those that grow in shallow, drought-prone soil patches on the rock surface. Seven rare plant and animal species have been documented at this site. 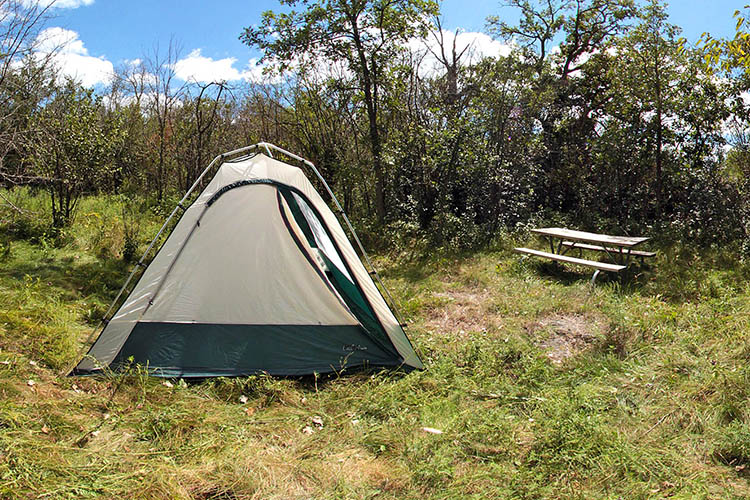 Camping Along the River

Primitive campsites along the Minnesota River provide paddlers with a scenic view and a quiet site to rest for the night. Get away from it all and enjoy the beauty and solitude of the Minnesota River by camping on a granite outcropping that overlooks the forested floodplain. 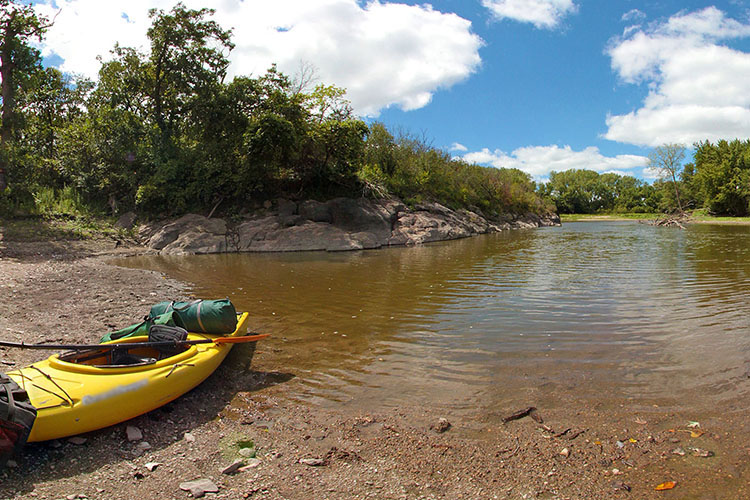 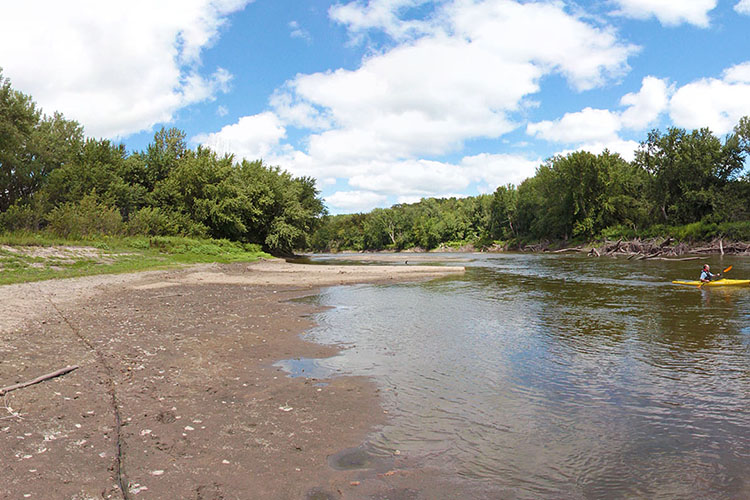 The Minnesota River is one of 33 State Water Trails designated by the Minnesota Department of Natural Resources. The river offers many opportunities for boaters, paddlers, anglers, campers, and sightseers. Portions of the river have been designated as a Wild and Scenic River. 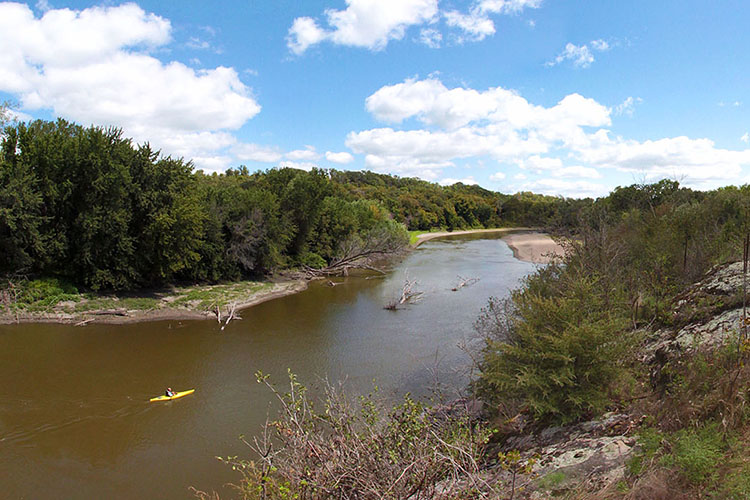 The Minnesota River flows 335 miles from Big Stone Lake in Ortonville to its confluence with the Mississippi River near Fort Snelling State Park in St. Paul. The Minnesota River is generally a gentle, placid river, but can become more challenging with rapids found at Patterson Falls and the newly restored Minnesota Falls.