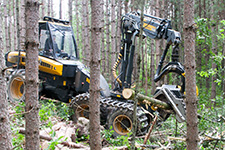 Damage from pine bark beetles can potentially be avoided with well-timed thinning and quick removal of wind- or fire-damaged conifers.

During drought there is heightened risk for bark beetle population buildup and damage. We observed this in 1976, 1987, 1988, and 2021.  To reduce the risk of a pine bark beetle infestation:

When pines are damaged by strong winds or fire, thinning pine stands, or clear-cutting pine adjacent to younger pine stands, follow these guidelines in Minnesota* to avoid problems with bark beetles in the remaining conifers, and to avoid bluestain

*Note: For areas in far southern Minnesota, logs and slash may have to be removed before May 15 if cut from early December to mid-May, particularly if the early spring has been warmer than average. For areas in far northern Minnesota, logs and slash might not have to be removed until mid-June if the early spring has been colder than average. 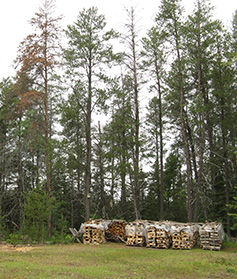 Preventing attack by pine bark beetles is best. Keep trees well-watered during periods of dry weather. Promptly haul large (greater than 3" in diameter) pine debris away to an approved facility or chip up broken branches or snapped-off pines after a storm. Make sure fresh firewood is never stored close to healthy trees, since freshly cut pine firewood can provide pine bark beetle habitat.