Heterobasidion root disease (Heterobasidion), formerly known as Annosum or Annosus, is a serious economic threat to red and white pine plantations and is caused by the fungal pathogen Heterobasidion irregulare. Once Heterobasidion gets into a site it remains there for decades. Other conifer hosts can be infected, including jack pine, white spruce, balsam fir, and eastern red cedar, but the disease poses a lower threat to these species since they usually are not grown in plantations.

Heterobasidion was found for the first time in Minnesota in late 2014 in northern Winona County and was eradicated from the site in early 2017. Surveys throughout the state since then have found no other Heterobasidion infections. The Wisconsin Department of Natural Resources reports Heterobasidion in 30 counties, and three of these are adjacent to Minnesota. 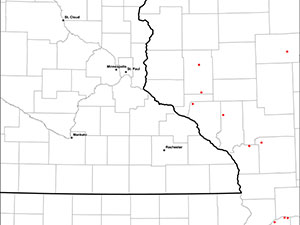