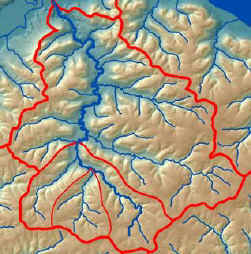 Gravity and topography are the two major factors that define a watershed.  Gravity is the unrelenting force of nature that pulls all water downhill. Topography describes the form of the land: the hills, valleys and other features that influence where and how water will flow. After saturating the ground, rain or meltwater trickles downhill in tiny rivulets that coalesce into larger ones that eventually combine into streams. These then merge into rivers that finally flow into the ocean. (Perhaps stopping temporarily in water bodies such as lakes.) Gravity and topography help define these channels of water from the tiny to the huge and cause them to join together into stream networks. These water-flow structures frequently resemble the branching pattern of trees or blood vessels (see image below left).

Watersheds allow us to evaluate the quality and quantity of our water resources geographically. Only by knowing our local watershed and the system of watersheds in which it resides can we begin to understand why and where small changes can have huge impacts on our state's water. Human and natural modifications made in one watershed may be spread many miles downstream to another. Understanding this "domino-effect" is critical to the DNR's monitoring and managing of our state's water resources.

The term watershed or catchment basin refers to the entire physical area or basin drained by a distinct stream or riverine system, physically separated from other watersheds by ridgetop boundaries." (from Entering the Watershed, A New Approach to Save America's River Ecosystems by The Pacific Rivers Council).

Unfortunately, defining and sizing watersheds arbitrarily to suit a specific need may make them unsuitable for any other purpose. To remedy this problem and thus permit better sharing of watershed-related information, a standardized set of watersheds was developed by the DNR in 1979. This Watershed Mapping Project delineated 81 Major Watersheds covering the state and around 5600 Minor Watersheds that comprised these Major Watersheds.

Even earlier in the 1970's, the USGS (United States Geological Survey) and NRCS (Natural Resources Conservation Service) developed the Hydrologic Unit system (HU for short) to divide and subdivide the U.S. into successively smaller watersheds. This system has been recently expanded and now adopted by the DNR with some modifications for its Lake Watershed Delineation Project.

The HU system is both Hierarchical and Nested. This means that watersheds are classified by size into several levels and that each watershed of a given level is composed of several watersheds of the next higher level.

The map at below shows how the contiguous U.S. is divided into what are known as Regions or Level 1 (2-digit) HUs.  Minnesota is overlapped by four such Regions: Great Lakes (04), Missouri (10), Souris-Red-Rainy (09) and Upper Mississippi (07). Regions, in turn, are divided into Subregions (Level 2) then Basins (Level 3), Subbasins (Level 4), Watersheds (Level 5 - Note capital 'W'), and finally Subwatersheds (Level 6).