Established in 2010 as a state water trail, the Blue Earth River takes its name from the blue-green clay found in the river bluffs near Mankato.

The Blue Earth River flows through a diverse and scenic landscape. You'll pass remnants of the Big Woods that covered east-central Minnesota, as well as natural grassland where bison used to roam. The river deepens in the lower twelve miles, curving below rocky bluffs and wooded hills. Wildflowers add color to the shores in spring. The river runs north through Faribault and Blue Earth counties before the confluence with the Minnesota River near Mankato.

The river is usually calm with one area of Class I rapids; however, major rainfall can create fast moving water and waves capable of swamping a canoe or kayak. Check river levels before your visit. Other canoeable rivers flow into the Blue Earth, offering numerous trip options. Hazards include the Rapidan Dam. Be aware of portage locations and stay clear of the dangerous current below the dam.

This route is for experienced paddlers. Enjoy beautiful scenery as you paddle an area of challenging Class I rapids, view nearby Triple Falls, and pass the "Big Moe" boulder. This stretch should be avoided if river levels are high. The paved Red Jacket Trail connects both access points, offering an opportunity for a pedal (biking)/paddle experience.

This state park offers a variety of recreational opportunities, from camping, picnicking and hiking to a drive-through bison range and a large waterfall. 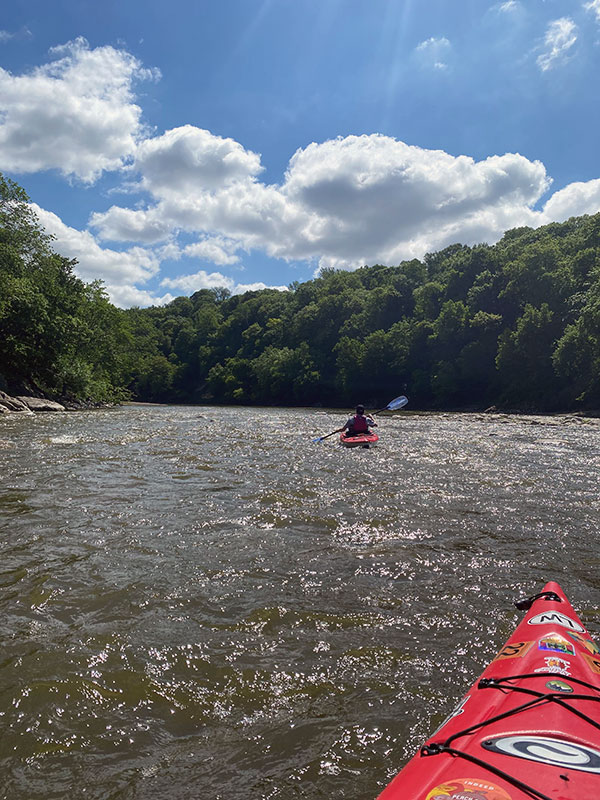 One of the earliest European adventurers to the area was Pierre Charles le Sueur, a French fur trader and explorer. Le Sueur discovered a curious bluish-green clay upon the banks of the river, a clay that the Dakota used for pigment. Taking it back to France, it was determined that this clay contained copper, and Le Sueur came back to what would become southern Minnesota to establish a copper mine. After digging 30,000 pounds of the blue-green clay and bringing 4,000 pounds back to France, it was discovered that there was no copper to be had. Nevertheless, Le Sueur's voyage into Blue Earth established French control of the area.

The area remained under French control until 1803, when the Louisiana Purchase transferred the area to the United States. The Blue Earth county area, however, was still officially Indian Territory until ratification of the Treaties of Traverse des Sioux and Mendota. This was the beginning of a permanent presence of Euro-Americans in the area. In March of 1853 the county of Blue Earth was created. Rising tensions in the area boiled over in 1862 with the outbreak of the U.S.-Dakota War. Learn more from the Minnesota Historical Society.

In 1868, large changes came to the area with the arrival of the railroad. Before this, the rivers of the Blue Earth area provided the easiest means of transportation across long distances; now, people established new towns along the rail lines. An intersection of several rail lines in Mankato helped establish it as an important center of commerce and industry. Today, much of the land is still dedicated to agricultural use.