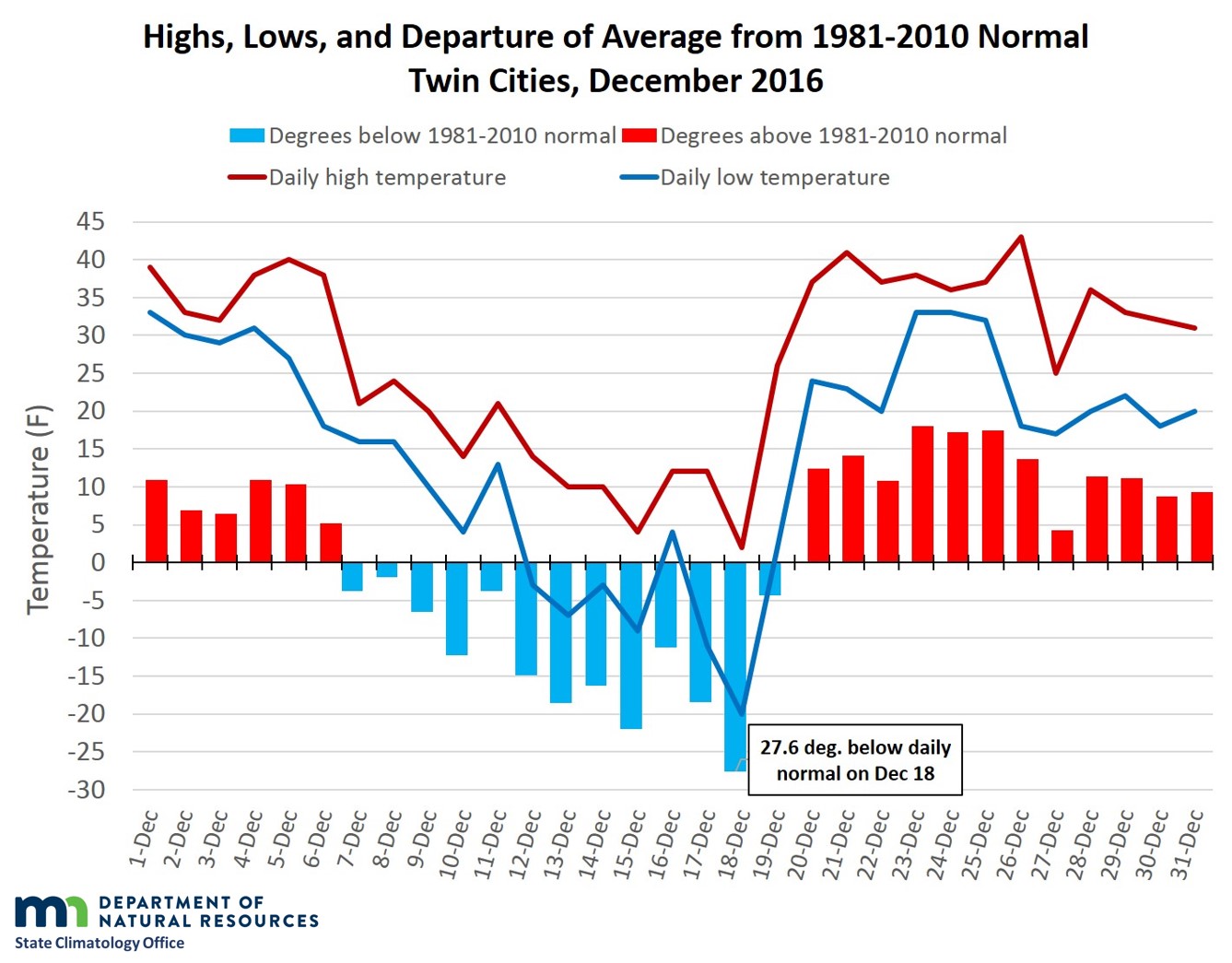 December 2016 daily temperatures and departures in the Twin Cities

Climatologists frequently deal in averages, yet anyone can tell you that the weather is rarely "average." December 2016 itself makes this point nicely: it finished just slightly warmer than average, but it got there by sandwiching a cold period between two warm ones, with very little time spent near average at all.

December 2016 came on the heels of a remarkably warm fall that was tied for the warmest statewide since 1895, with 73 out of 91 days warmer than the 1981-2010 "normals" in the Twin Cities. The first six days of December continued that trend, averaging 5-10 degrees warmer than normal across the state, and it looked as if another warm month was in the bag.

Then came the "double-surprise," in which things took an abrupt turn towards much colder conditions before an equally significant warm-up turned the tables once more.

The rapid cool-down during the second week of the month stopped the warm trend in its tracks by knocking temperatures into subzero territory over much of Minnesota for nearly two weeks. Some of the lowest temperatures since the 2013-14 winter were recorded on December 18th. It looked like the cold air invasion would be long enough and deep enough close out December as the first colder-than-average month since August 2015 in southern and central Minnesota, and since April 2016 in the north.

The warm air, however, staged an impressive comeback, and the cold snap ended almost as abruptly as it began. By the 20th, temperatures had rebounded to well above normal, and some of the warmest readings of the month were recorded during this next run of above-average temperatures, which lasted right into the new year.

Minnesotans are used to large variations in temperatures, but December 2016 was notable for its long streaks of warm and cold conditions: the temperatures only switched from one side of average to another two times during the month. The result of these long stretches of seemingly opposite conditions was that the month ended up pretty close to average--slightly warmer in most locations, making it 16 straight warm months Twin Cities.

December was also wet enough to help the Twin Cities break its all-time annual precipitation record. What a perfect way to end such a warm, wet, and stormy year!