2016 was a warm, wet, and stormy year for Minnesota. It was a year for "firsts," for broken records, and for venturing into previously uncharted climatological territory.

Following is a recap of some of the weather and climate highlights (and lowlights) of 2016. 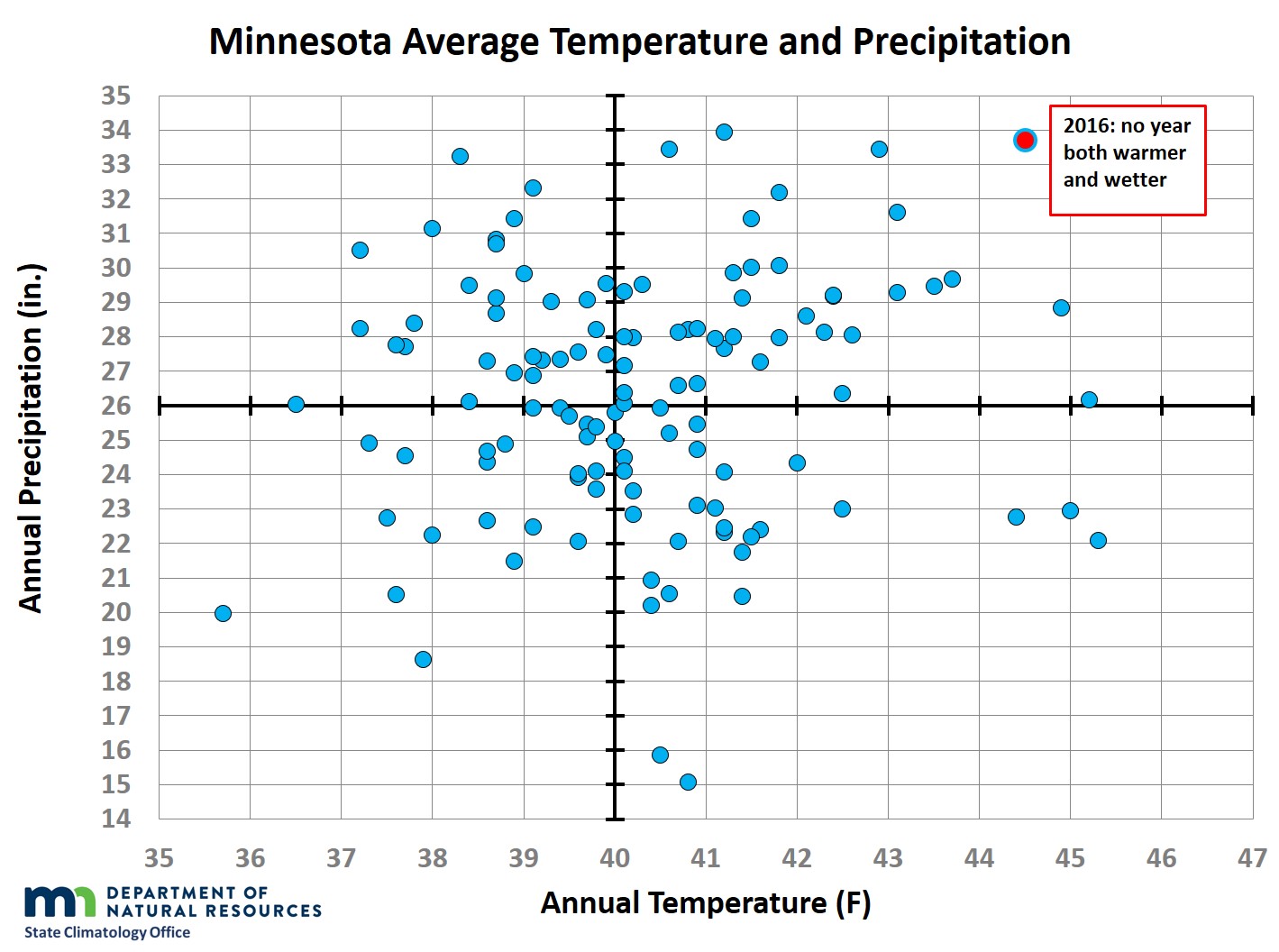 Chart showing annual statewide combinations of average temperature and total precipitation. No year back to 1895 was both as warm and as wet as 2016.

With statewide average precipitation of 33.70 inches,  and an average temperature for the year of 44.5 degrees F, this was the 2nd wettest and 5th warmest year on record for Minnesota, back to 1895. Perhaps more impressively, none of the 122 years on record have been both this warm and this wet. In other words, we have never observed this combination of warmth and moisture in Minnesota.

The precipitation surplus was fueled by a very wet July through September, which ran 50% above normal statewide (even more so in southern Minnesota). Many of the other months were near normal or slightly drier than normal. Above-average temperatures, on the other hand, were spread across the calendar. Across the state, every month was warm, with the exception of April in the north, and December in the far south and southeast. 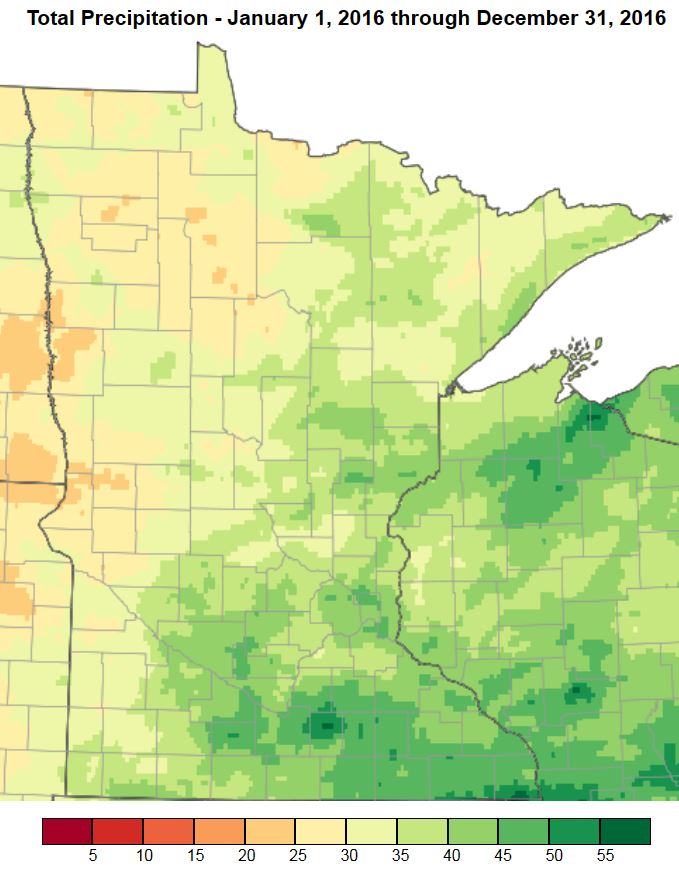 2016 was exceptionally wet for of the state, and only a small part of northwestern Minnesota (near Red Lake) came in with (slightly) below-average precipitation. By mid-November, Waseca had already set a new statewide annual precipitation record for an official Cooperative Observer, and it finished the year with 56.24 inches, obliterating the old record by 2.72 inches. For perspective, that margin is roughly equivalent to the entire range of values in the remainder of the top-10 annual precipitation totals for Minnesota (#2 is 53.52" and #10 is 50.67").

Another oddity of 2016 was the high frequency of intense rainfall events during an unusually long wet season. The largest and most widespread rainfalls were July 11-12 and August 10-11. These both qualified as "mega" rainfalls, making 2016 the first year on record with two such events (the reliable record goes back to 1973; before then, observer density was much lower and it was easier to "miss" a qualifying storm). A major heavy rainfall-producing system on September 21-22 did not satisfy the "mega" criteria, but did produce two distinct pockets of 6"+ rainfall, one of which helped propel Waseca to its annual statewide precipitation record. Other notable heavy rainfall events affected two parts of Minnesota on June 12-13, southern Minnesota on June 14, west-central through southern Minnesota on July 5, southern and central Minnesota on July 23, and central Minnesota on August 29.

It was the 5th warmest year on record for Minnesota, and the warmth was unusually persistent across the state. 10 of the 12 months were warmer than average across the entire state, and some locations were warm for all 12 months. The Twin Cities ended 2016 on a 16-month warm streak.

The persistent warmth produced the longest frost-free season on record in the Twin Cities (219 days), as well as a first-frost date of November 18th, which is 11 days later than the record it demolished.

The warmth was driven much more so by a lack of cold weather than by an excess of intense heating, and none of the summer's heat waves were particularly noteworthy. The highest temperature recorded in the state was 100 degrees at Madison on June 13th. Readings this high or higher typically occur multiple times per year somewhere in Minnesota. The lack of temperature extremes on either end led to some unusual "mild weather" records being set. The Twin Cities and Rochester each broke records for number of daily lows of at least 60 degrees F. Milan, in western Minnesota, set a similar record for lows of at least 50 degrees. 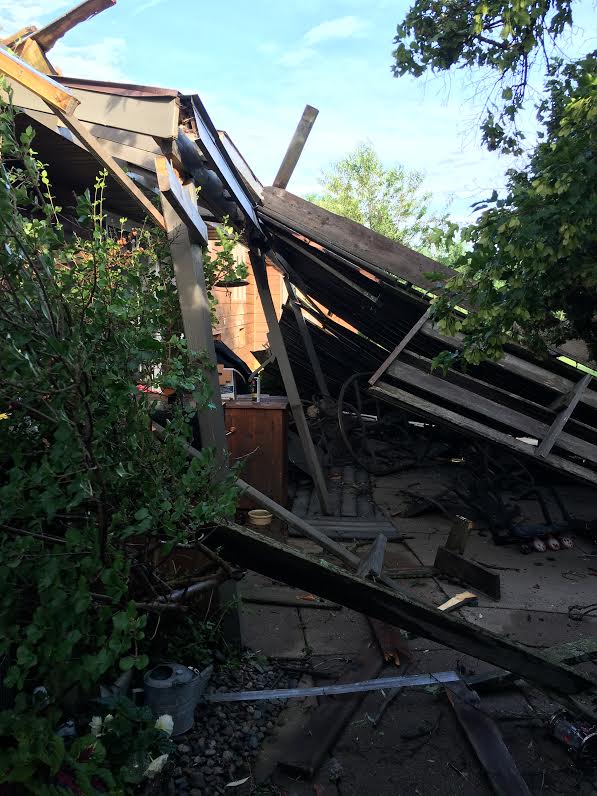 Considering how wet it was, and that thunderstorms tend to account for much of our precipitation, we shouldn't be surprised that 2016 was a thundery year in Minnesota. Thunderstorms were reported each month from February through December, and many areas in the southern part of the state had 50 or more thunderstorm days. In general, thunderstorm activity ran 20-40% above average. We do not have consistent data for historical comparisons, but 2016 would likely find itself near the top of the heap. The length of the thunder season may be unmatched, and the level of activity during the peak of the season was quite high. Other stormy years in recent decades include 2002, 1991, and 1986.

Many of 2016's thunderstorms packed a punch too. In addition to producing heavy rainfall, thunderstorm wind damage was common--especially in northern parts of the state, where fallen trees, power outages and structural damage seemed to occur weekly during the summer. Damage and/or power outages affected Crow Wing and Aitkin counties at least six different times during the summer. The most noteworthy and tragic events occurred during Fathers' Day (June 19) and on July 20-21, when a long-lived and powerful storm damaged an area hundreds of miles long and extending well beyond Minnesota's borders. Other damaging storm events were too numerous to recount here, but may be found in the May through August 2016 sections of our Climate Journal.

Of the 37 tornadoes reported in the state, 9 were rated EF-1, and 4 were rated EF-2. Some of the most significant damage occurred in Litchfield and Watkins on July 11th, and also at Camp Ripley on September 7th. Fortunately, however, the number of damaging tornadoes remained below historical averages. In fact, Minnesota has now gone six years for without an EF-3 or stronger tornado, which is the longest such streak in 67 years of records. 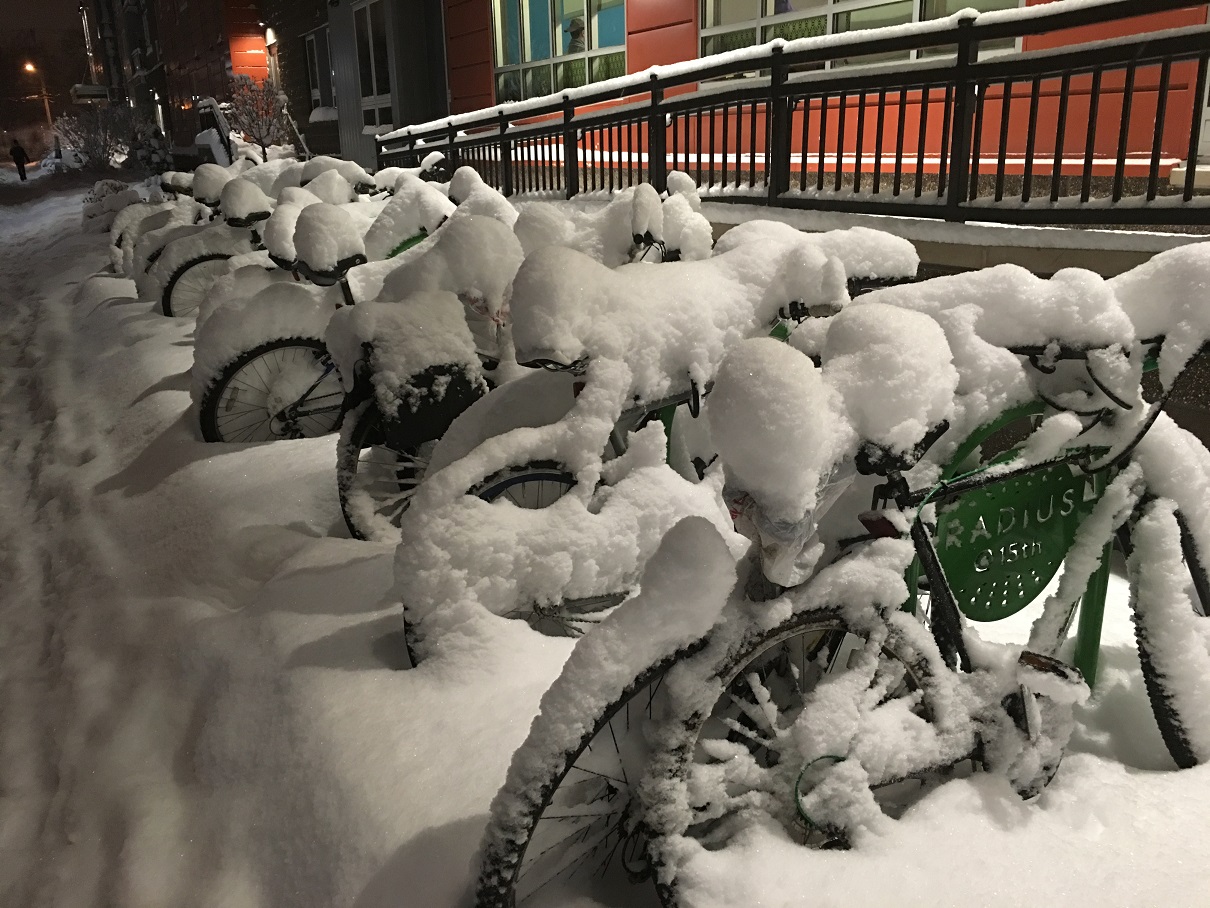 From the standpoint of total snowfall, 2016 was not historically significant. The 2015-16 winter ended with the much of the state coming in 30-50% short of average seasonal snow. Only the snow-prone areas in the Arrowhead region had near or above-average snowfall. Isabella, for instance, recorded 121.6 inches during the season. The beginning of the 2016-17 season was a bit snowier, but not enough to prevent 2016 from ending 10-40% below average, with the exception of northeastern Minnesota.

Despite the low overall snowfall totals, 2016 did have quite a few decent winter storms. A very concentrated band of intense snow on January 6-7 in northwestern Minnesota on January 6-7 produced localized totals in excess of one foot. A potent storm system on February 2-3 produced up to a foot of snow in southern Minnesota, while severe blowing and drifting snow forced some major roads to shut down outstate. The first winter storm of 2016-17 was quite fierce, producing up to two feet of snow in northern Minnesota, with 45-60 mph wind gusts. Another powerful storm on Christmas Day and December 26 produced dangerous travel conditions across the state, with some damage to trees and powerlines as ice, snow, heavy rain, and even thunderstorms were followed by prolonged winds gusting over 60 mph in some areas.

2016 was a wet year indeed, but a year covers a lot of time and Minnesota is a large state. Drought was not a major problem during the year, but there were some areas and periods of concern. In May, much of northern and western Minnesota were moved into the "abnormally dry" category on the Drought Monitor. Rainfall eventually quelled concerns in northern areas, but during parts of June and July, a more pronounced drying in South Dakota began working into far western Minnesota, where for a few weeks, drought levels were increased to "moderate" and even "severe." Eventually though, the precipitation won out, and 2016 ended without any abnormal dryness anywhere in the state. If we combine areal extent with time and severity, there was less drought in 2016 in Minnesota than any year since 2001, making it a remarkably "low-drought" year for the state.

So how does 2016 stack up against other years? 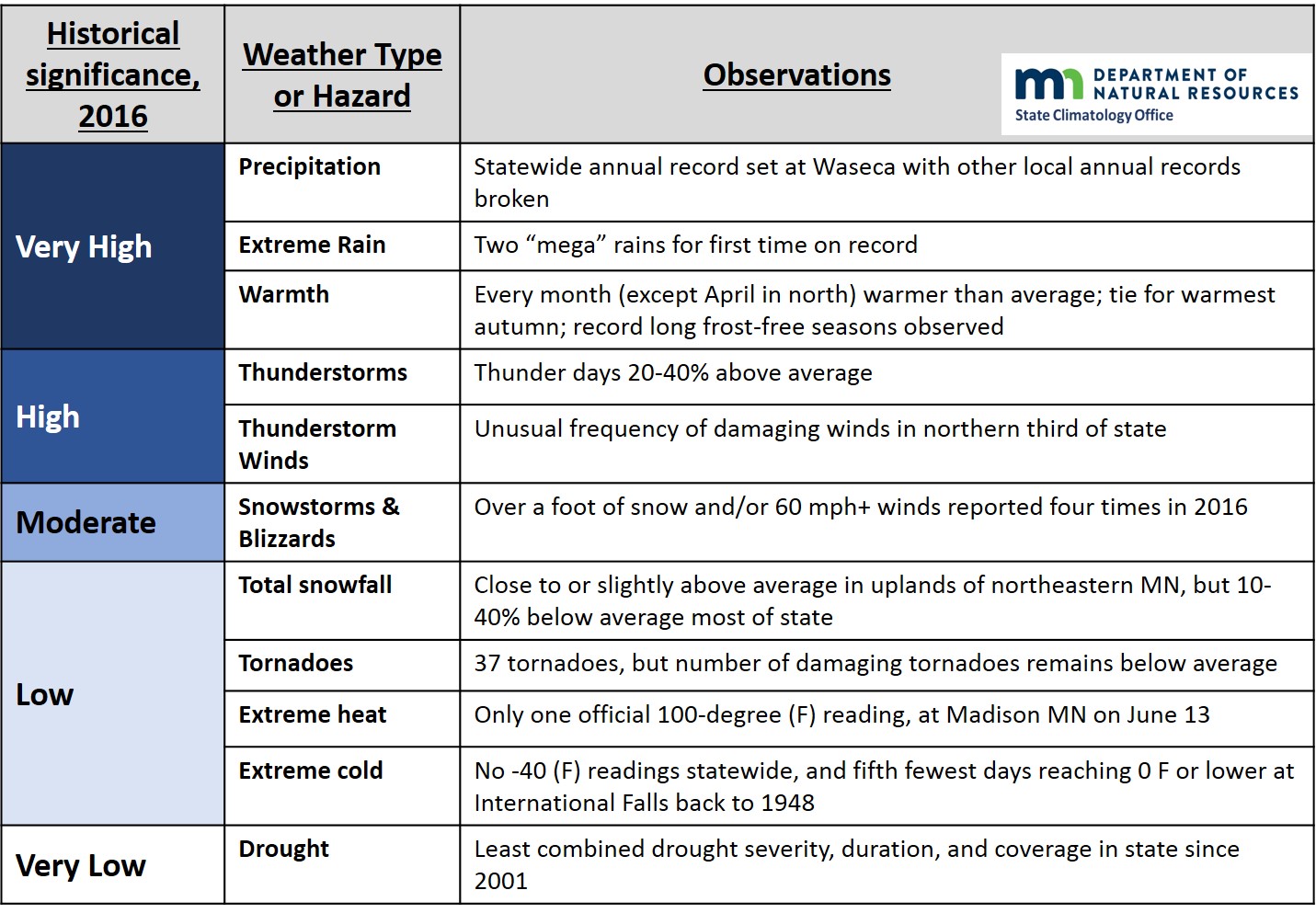 Historical significance of different weather experienced in Minnesota in 2016, based on assessment by the MN State Climatology Office.

2016 will be best remembered for its precipitation, its frequency of extreme rainfall events, and its warmth. In each of these categories, the year ranks at or near the top of our climatological records. It was also a very stormy year, but for other types of weather, we either saw "normal" behavior, or less activity than we would expect in a typical year.