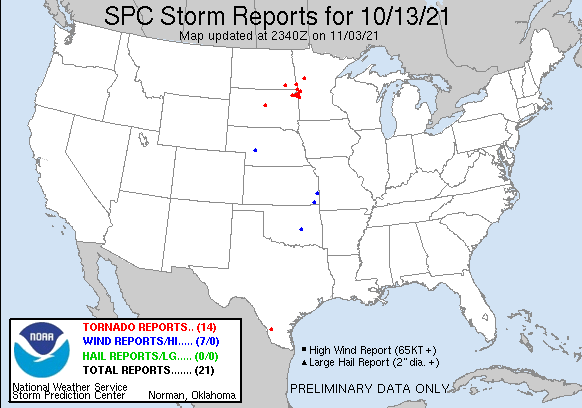 A strong low-pressure area produced some small but photogenic tornadoes again in western Minnesota on October 13th, quite close to the tornado tracks from just four days earlier.

These tornadoes formed in a moist but not particularly warm air mass, with dew points in the 50s F and temperatures in the low 60s F. The strong low-pressure system moving into and through the region did provide significant wind shear--winds intensifying and also shifting from southeasterly to southwesterly with height.

Unlike the tornadoes from October 9th, these formed similarly to classical tornadoes, although the parent thunderstorms were quite small.

The system produced two tornadoes again near Wheaton: one formed east, and another to the north-northwest of town. Both were rated EF-1, with winds estimated at or just below 90 mph. Other weaker tornadoes were reported in Big Stone County, and near Frazee in Becker County, about 25 miles west-southwest of the tornado that struck Park Rapids on the 9th.