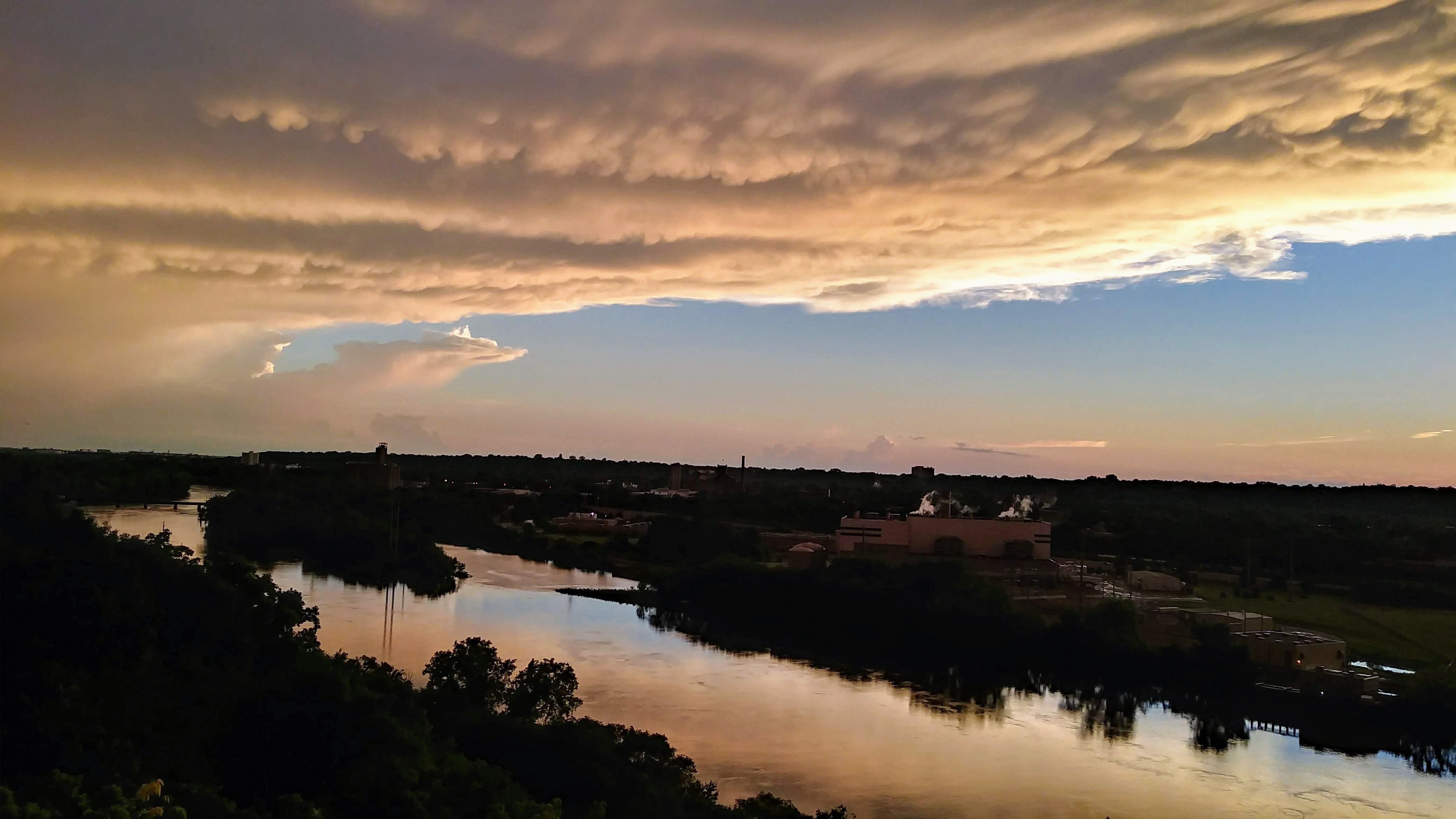 Sunday June 14th. The period began with severe weather from northwest into central Minnesota during the afternoon and evening of Sunday July 14th, as thunderstorms produced hail, damaging winds, and torrential rains. Winds gusted to 67 mph at a MnDOT sensor near Rothsay in Wilkin County, and went on to produce extensive tree and power line damage in Fergus Falls, as well as near Park Rapids, and then into the Brainerd Lakes area between Crosslake and Aitkin. Hail up two inches in diameter (larger than golf balls) fell in Becker County, and a DNR automated rain gauge recorded 3.47 inches of rain the storm near Fergus Falls, where the high-intensity rains led to flash-flooding that stranded cars in low-lying areas. (Grand Forks NWS Summary)

Monday July 15th. This active weather day affected nearly all of Minnesota,  with temperatures in the 90s, dew points in the 70s, multiple areas of heavy to severe thunderstorms, and some flash-flooding in the Twin Cities and southern Minnesota. We produced a separate story about this day.

Tuesday July 16. Although this was largely a day off from hazardous weather for most of the state, a decaying area of showers in south-central Minnesota during the early afternoon interacted with much warmer air around it, and produced a few small, isolated, but very intense thunderstorms. One of these thunderstorms developed over St. Paul and Minneapolis during the mid-afternoon and remained nearly stationary for over an hour. The storm was so concentrated that the Twin Cities International Airport recorded no measurable precipitation, while volunteer observers just five miles to the north recorded between one and two inches of rain. The intense rains produced minor flooding in Minneapolis, and led to a mudslide that closed a section of East River Parkway near the University of Minnesota. 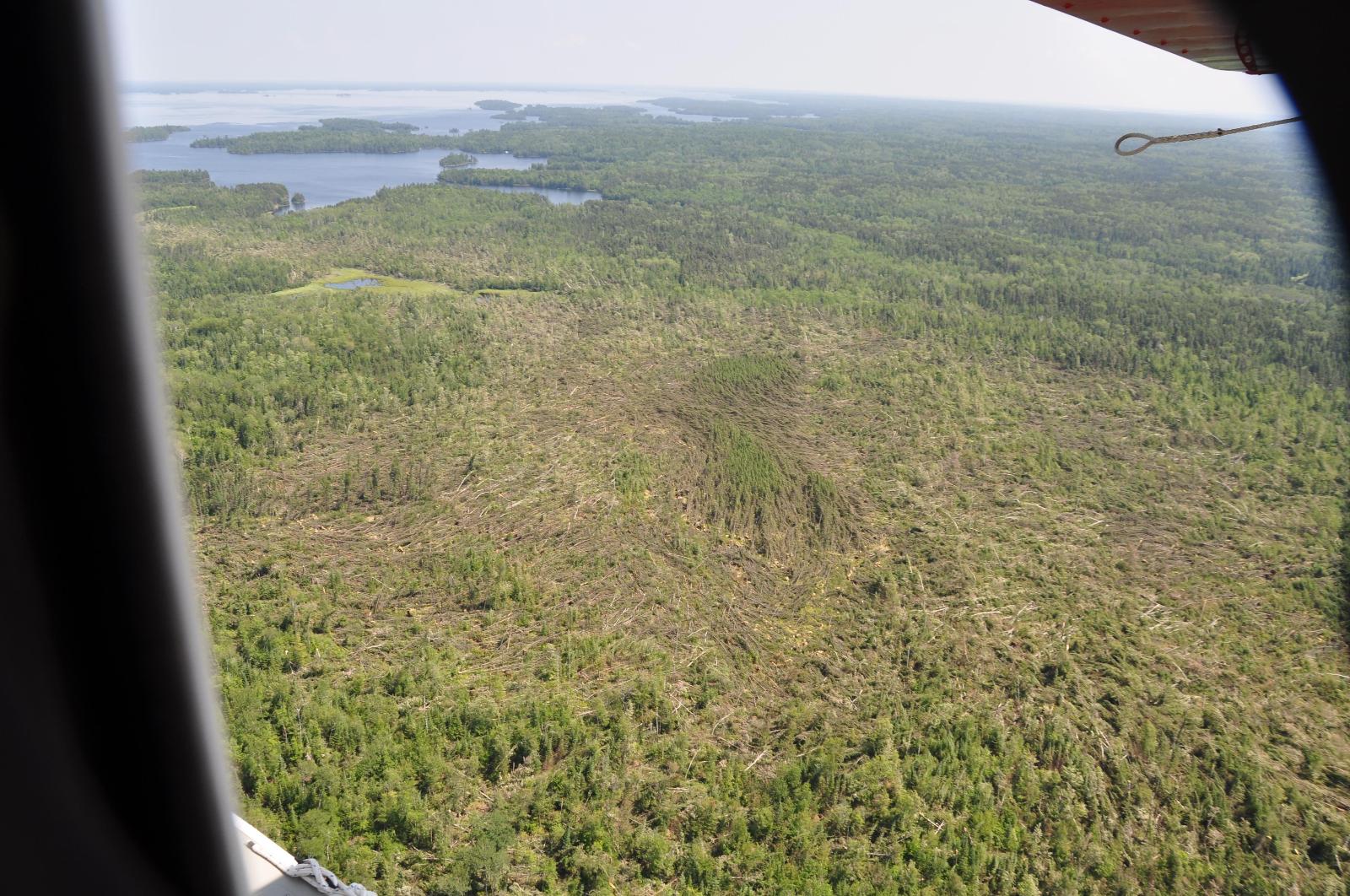 Wednesday July 17th. Widespread severe weather resumed, as winds aloft intensified over northern Minnesota and a surge of moist air worked from south to north across the state. Powerful thunderstorms developed in the late afternoon in far northwestern Minnesota and spread eastward into the evening, producing significant wind damage and a rare outbreak of Northwoods tornadoes. The first tornado was reported at 4:05 PM CDT in Beltrami County just west of Norris Camp in Lake of the Woods County. Over the next four hours, the storms would produce additional tornado sightings in Lake of the Woods, Itasca, and St. Louis counties. Between the tornadoes and other strong wind gusts, damage was fairly widespread along and south of the Canadian border in northern Minnesota, mostly in the form of snapped and uprooted trees.

The Duluth National Weather Service Office, in collaboration with the National Park Service, was able to rate the tornado in Voyageurs National Park as an EF-1 on the Enhanced Fujita scale. As of August 2nd, two other tornadoes had been confirmed but not rated. Read the NWS event summary.

Very late in the night, thunderstorms developed in southern Minnesota ahead of a potent warm front. The northwestern-most of these storms was particularly intense as it clipped the southern Twin Cities area. Spotters in Prior Lake reported baseball-sized hail, and hail to two inches in diameter fell in Burnsville.

Friday July 19th. This very hot and stormy day may have been the main event within a very active week, and we have a separate write-up about it here.

Saturday July 20th. Another contender for event-of-the-week, was this major severe weather outbreak that produced extensive wind damage across far southern Minnesota. Our summary is here.