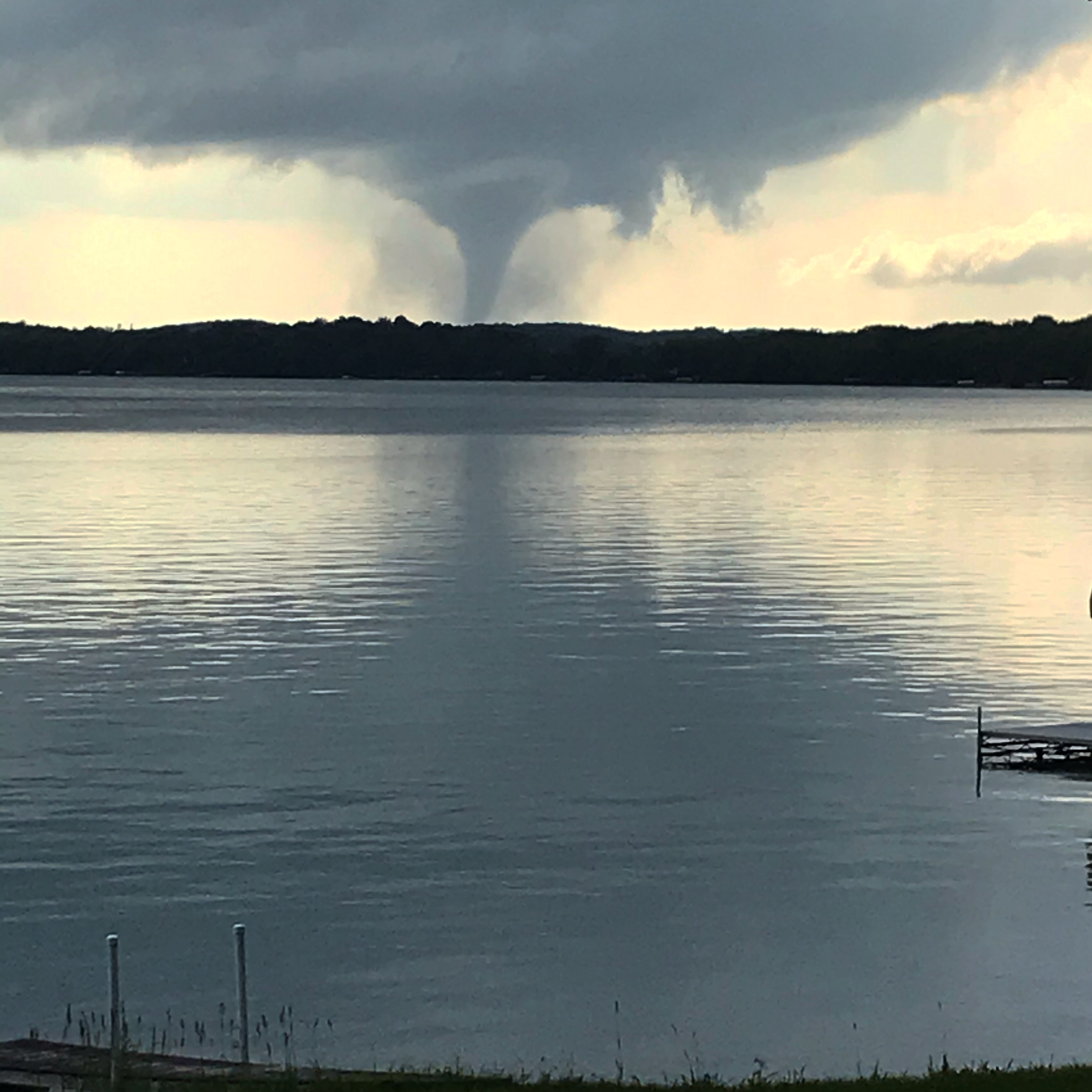 View of the deadly tornado near Dalton, as seen from Eagle Lake on July 8, 2020.
Photo credit: John Nordstrom

A destructive and unfortunately tragic day unfolded in Minnesota, as storms lashed western, central, and northern areas in the early morning, and again in the evening, with damaging winds, hail, and one lethal and particularly violent tornado. Heavy rains also accompanied the storms, with minor flooding reported in some areas.

The first round of intense storms developed in Montana on the evening of Tuesday July 7, with storms racing through North Dakota at 50-65 mph, and making it into  western Minnesota around 3 AM on Wednesday the 8th. The storms had produced nearly continuous 65-85 mph wind gusts and damage in North Dakota, and continued doing so into west-central Minnesota. The Fergus Falls municipal airport in Otter Tail County reported a wind gust of 83 mph at 4:35 AM. Gusts of 74 and 71 mph were reported by road weather stations in Wilkin County. The winds bent wind turbine blades, flipped an irrigation unit, blew down trees and power lines, and overturned ten recreational vehicles at a private campground. Given the long track of damage and wind gusts well above severe levels (58 mph is the threshold for winds to be considered "severe"), it is likely that this event qualified as a derecho (pronounced "deh-ray-cho").

The wind damage dropped off right around sunrise, but the intense thunderstorms continued pressing southeastward, producing heavy rains and vivid lightning. Rainfall totals of 1.5 to 2.5 inches were common through Otter Tail, Douglas, Todd, and Stearns Counties. The storms weakened in eastern and southern Minnesota, and had dissipated entirely by around 11 AM.

As a sultry air mass sent Heat Index values soaring to over 100 degrees F across central and southern Minnesota in the afternoon, a new upper-air disturbance emerged from the Dakotas. The combination of intense heating, high humidity, and strong winds aloft led to explosive atmospheric conditions.

New thunderstorms erupted in western and central Minnesota during the late afternoon. These slow-moving, intense "supercell" thunderstorms remained relatively isolated at first, and often split into "left-moving" and "right-moving" pairs.

One of the first supercells of the day produced a confirmed tornado that tracked from Grant into Otter Tail County. Unfortunately, this large, widely-photographed tornado produced significant damage and killed a 30-year-old man near Dalton, while injuring two others. The Grand Forks office of the National Weather Service rated the tornado an EF4 on the Enhanced Fujita damage scale, corresponding to winds in excess of 165 mph. This is the first tornado fatality in Minnesota since 2011, and the first tornado rated EF3 or greater since August of 2010.

Tornadoes rated at EF4 (formerly F4 on the Fujita scale) are rare, and cause an unusual amount of damage, even to well-built structures. Minnesota has had just seven days since 1980 with F4 or EF4 tornadoes:

Along with multiple instances of severe weather, the thunderstorms also brought repeat rounds of heavy rainfall to many of the same areas. The National Weather Service cooperative observer north of Isle on the east side of Mille Lacs, reported 3.38 inches of rain. A nearby CoCoRaHS observer reported 3.70 inches. The rain produced localized flash-flooding near Brainerd and Aitkin, but also provided much-needed relief from persistently dry weather and drought. Areas where drought has been especially harsh in recent weeks, from the Brainerd Lakes area, to Cloquet and Duluth, saw 1.5 to 3 inches of rain.

Following is the text of the initial National Weather Service statement on the Otter Tail County tornado(es). This will be updated as new information becomes available.