An enormous, powerful, and deadly winter storm overtook much of Minnesota and the surrounding region after an abundant and powdery snowfall ending on Thursday December 22, 2022, set the stage for a long-lasting and brutally cold regional ground blizzard.* The virtually impossible and life-threatening conditions on nearly all exposed roads in between cities and towns severely impeded holiday travel across multiple northern and central states. 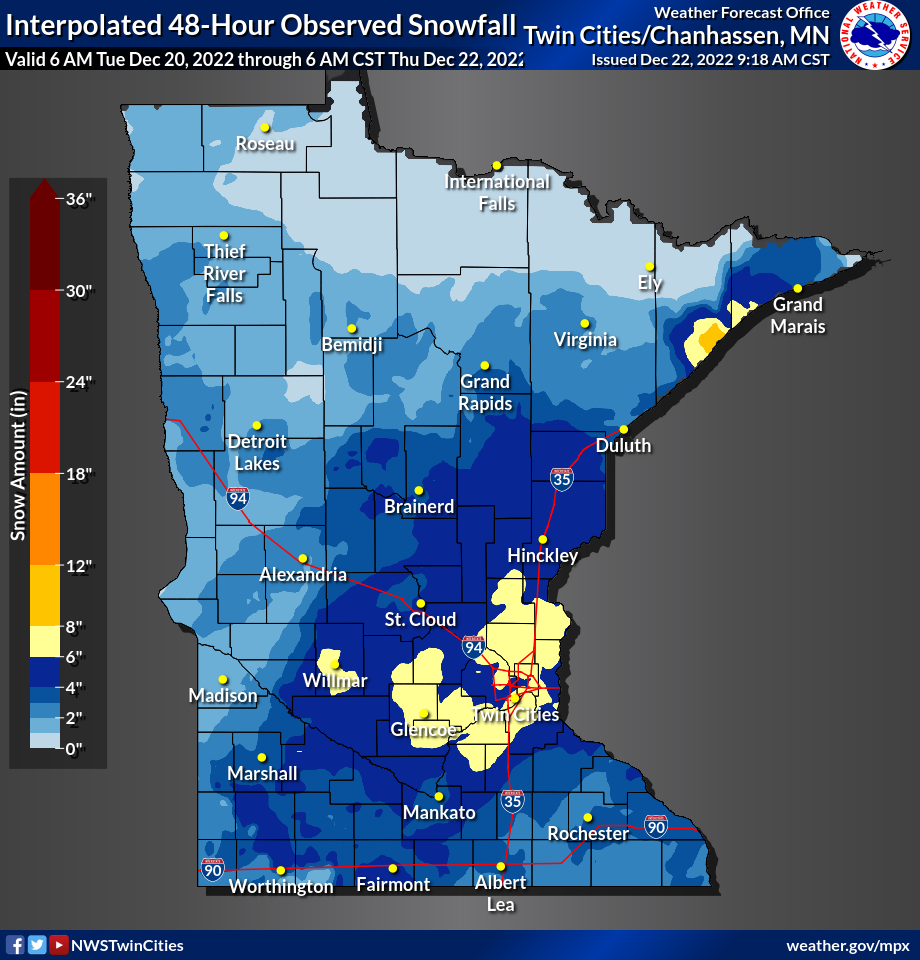 Snowfall totals through Thursday December 22, 2022 in Minnesota. Does not include additional snow falling in northeastern Minnesota through the weekend. The mapping techniques tend to "smooth out" higher values, and isolated areas received more than indicated.
Map courtesy of National Weather Service, Twin Cities/Chanhassen

As the previous week's damaging slush storm moved away from the region, much colder air began filtering into Minnesota, and then was reinforced by the passage of a cold front on Tuesday. On the day of the Winter Solstice, Wednesday December 21st, temperatures remained at or below 0 degrees F over all but the southeastern quarter of Minnesota. Snow began in southern and central Minnesota during the morning, to the north of a warm front in Nebraska and Iowa that was associated with a low-pressure area organizing in eastern Colorado.

Light to moderate snow fell on and off across Minnesota Wednesday and Wednesday night, with accumulations ranging from an inch or less in far northern Minnesota, to 5-8 inches in east-central and southern Minnesota, centered near the Twin Cities area. Some higher totals included 8.5 inches reported at Green Isle in Sibley County, and 8.1 inches at the Minneapolis-St. Paul International airport. About 3/4 of the state received two inches or more.

This was an unusually cold accumulating snowfall event. Temperatures remained between -10 and 5 degrees F across central and southern Minnesota while the snow fell, and a rather intense band of snow in the late afternoon dropped the visibility to a half-mile at Thief River Falls, while the air temperature was -13F. The old, untrue adage that, "it's too cold to snow" exists because when temperatures fall to zero F or lower, snow-producing systems are usually suppressed well to our south, and high pressure is usually in place, causing sinking air, which prevents not just the formation of precipitation, but also clouds. This is why most cold days and nights are often clear as well. Occasionally, however, a persistently cold air mass will have access to both moisture and lift, allowing clouds and snow to form.

Receiving an inch of snow or more while temperatures remain at or below zero occurs about every ten years or so in southern Minnesota, and a bit more frequently in northwestern parts of the state. Receiving two inches or more on such cold days only recurs about every 20 years (on average), and receiving four inches of snow or more when the temperatures fail to climb above 0 F is essentially a 40 to 50-year occurrence. In the Twin Cities, where the high was 1 F, the 7.4 inches recorded on December 21st was the second-largest daily snowfall on record to have occurred in such cold conditions. On January 16, 1994, the high was 0 F, and 8.4 inches of snow fell at the MSP airport.

The low pressure intensified gradually as it moved between eastern Colorado and the Great Lakes into Thursday, but then deepened quickly into a "bomb" cyclone as it continued into the eastern Great Lakes and the Ontario/Quebec provincial border area. Bomb cyclones are low-pressure areas that lose 24 millibars (mb) of pressure within 24 hours, accelerating the flow of air towards the center of the system, expanding the storm's circulation, and often appearing on weather maps like an "explosion" of pressure lines taking over a large region. This storm lost 30 mb of pressure between 9 AM Thursday and 9 AM Friday, which is rapid intensification, even by bomb-cyclone standards. The low pressure was still intensifying rapidly as of Friday afternoon.

This strengthening had been anticipated by forecasters, who, fearing that the deep blanket of fresh powdery snow would blow and drift violently in the storm's increasing winds, issued a slew of Blizzard Warnings covering large parts of Minnesota and every neighboring state right into Saturday. By Friday afternoon, 35-50 mph wind gusts were being reported over almost all of Minnesota, and whiteout conditions were common in open of the northwest, west, and south. Plows were pulled off of many roads in western and southern Minnesota because of dangerous conditions.

With the storm reaching peak intensity on a Friday,  just two days before the Christmas holiday, the whiteout conditions and wind chill temperatures of -25 to -45 F posed serious threats to stranded travelers exposed to the intense cold. MnDOT's District 8 social media and highway emergency personnel reported on Friday that numerous vehicles were stalled or stranded in the middle of roads and in ditches, and that rescuers were "swamped." Governor Tim Walz authorized Minnesota's National Guard to mobilize as part of a peacetime emergency to assist with search-and-rescue operations. Transportation officials closed virtually all state and US highways in southwestern Minnesota on Friday afternoon, with a long segment of I-90 and parts of I-35 shut down as well. Some roads remained closed until Christmas Day, and the last of MnDOT's no-travel advisories were lifted on Monday December 26th.

In the Twin Cities, and many other built-up areas, the second phase of the storm was more like a "severe nuisance" than a life-threatening blizzard. The cold, wind, and deep powdery snow reduced visibilities at times, and contributed to a dense web of ice-packed and dangerous intersections. However, many urban residents were left wondering if the storm has been over-hyped. It had not: in outstate Minnesota, this was a classical and severe ground blizzard.

The storm went on to make major headlines as it intensified and headed east, producing a lethal and catastrophic lake-effect blizzard in upstate New York, while heavy rains, ice accumulations, drifting snow, and deep cold swept across much of the central and eastern US during the holiday weekend.

* The term "ground blizzard" describes blizzard conditions that occur without falling snow. In these instances, loose and typically powdery snow that fell previously blows and drifts severely in winds that gust above 35 mph for prolonged periods. Visibilities can drop to zero, making travel extremely hazardous or impossible. The blizzard conditions often "hug the landscape," keeping the worst conditions relatively close to the ground, hence, the name. Ground blizzards can be exceptionally dangerous because of the Arctic air that often accompanies the strong winds. Stranded motorists may find themselves in life-threatening conditions.