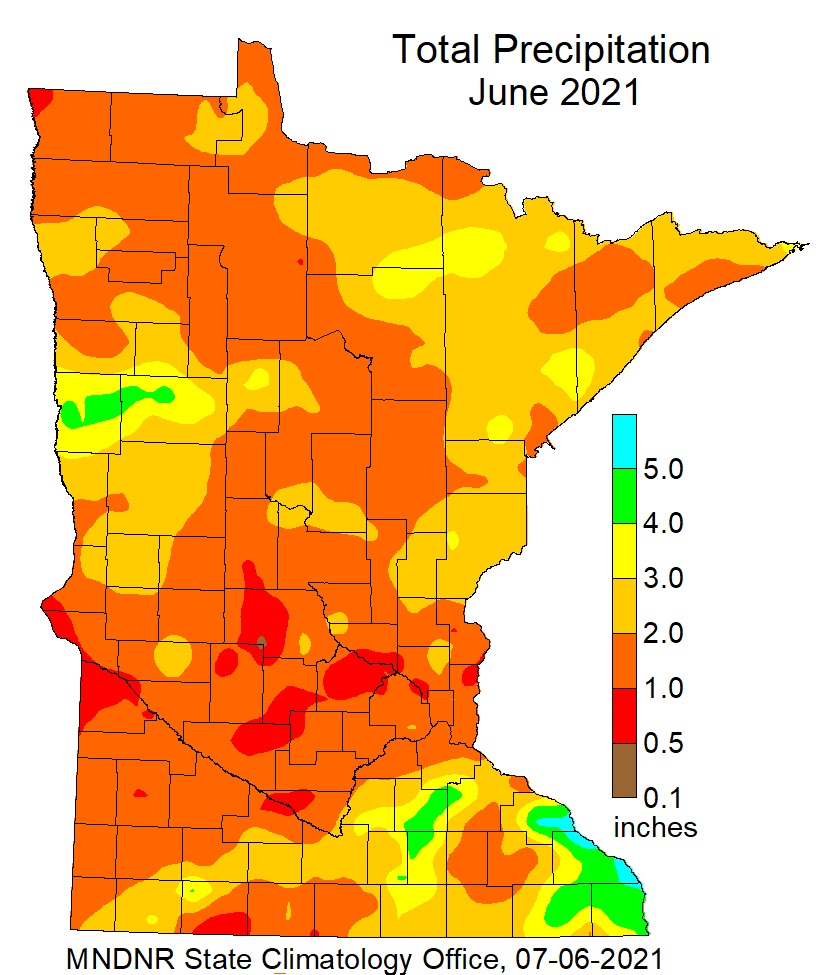 Bolstered by a record-breaking early season heat wave, June 2021 finished among the warmest on record across Minnesota. With an average temperature of 69.9 degrees F on a statewide basis, this was the third warmest June on record (back to 1895).

June was also quite dry, averaging just 1.83 inches across the state, which is 2.28 inches below the statewide "normal" value from 1991-2020. This ranks June 6th driest on record since 1895. When combining the temperature and precipitation, no June was both warmer AND drier than June 2021; the closest was 1988, which was warmer but averaged approximately 0.01 inches wetter.

The warmest National Weather Service cooperative observing station with no missing days during June was the Twin Cities International Airport, with an average temperature of 76.8 F. The highest average daily high temperatures during June were at Milan, in Chippewa County, where the average daily high was 90.5 F. The Twin Cities tied Vadnais Lake for the the highest average low temperatures, with 66.1 F. It should be noted that the area within the I-494 and I-694 loop has a well-documented "urban heat island," which boosts local temperatures, especially at night.

A small proportion of the state actually had above-normal precipitation for June. These areas were confined to isolated parts of west-central and southeastern Minnesota. The highest monthly precipitation total, of 6.42 inches at the La Crescent Dam, therefore is misleading: fewer than 5% of stations with complete data had over five inches of precipitation; only 8% had four inches or more and just 14% had over three inches for the month--a value that is significantly below normal even in the relatively arid regions of northwestern Minnesota.

The warm and dry conditions were layered on top mounting, long-term precipitation deficits, and propelled Minnesota into its first major drought in almost a decade.