Yes, it was a gusty winter. 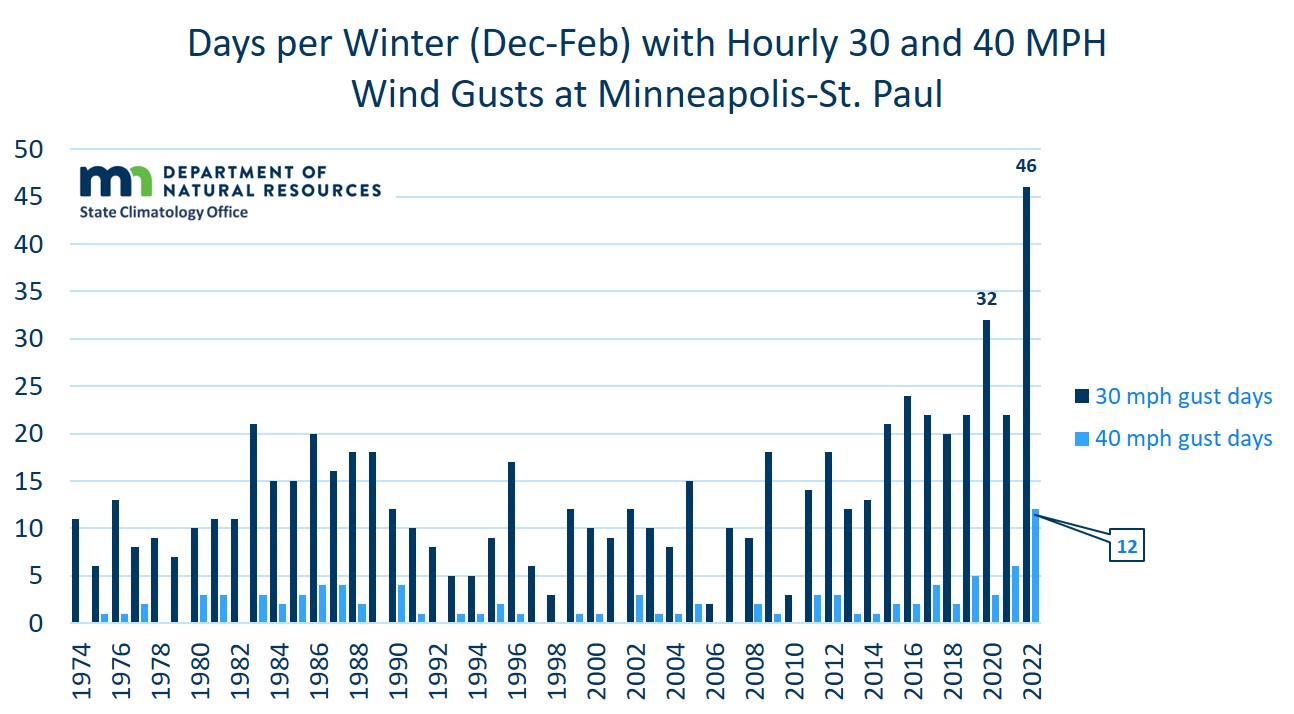 Days per winter in the Twin Cities (December through January) with 30 and 40 mph wind gusts during at least one hourly observation.
Image credit: Graphed by Minnesota State Climatology Office using data from NOAA and the Midwest Regional Climate Center.

The winter of 2021-22 was known for its frequent blizzards, its temperature swings, and perhaps most notably, its high frequency of gusty days.

Using data from the Twin Cities airport station (MSP), we see the winds gusted to 30 mph during at least one hourly observation on 46 different days, representing slightly more than one-half of the winter.* This is a highly unusual phenomenon, as prior to this winter, none had recorded more than 32 such days, and the long-term average was 13 days per winter.

Not surprisingly, the number of days with at least one hourly 40 mph wind gust also greatly exceeded anything recorded previously. This winter had twelve 40 mph gust days in the Twin Cities, versus a previous record of six.

Two days had peak wind gusts to 61 mph (December 16 and February 18), with one other day recording a gust above 50 mph.

Other stations in Minnesota were similarly gusty. In St. Cloud, for example, this winter had 29 days with 30 mph gusts, compared to a previous record of 22 days, and a long-term average of just under nine days.

It's also worth noting that this gusty period actually extends beyond this winter, to the other seasons in other recent years. At both St. Cloud and the Twin Cities, the mid-2010s marked the beginning of much gustier times, with annual 30 mph gust days increasing dramatically over previous levels. The gustiest year on record at both stations was 2020, with 168 days in the Twin Cities and 114 at St. Cloud.

Unfortunately, we cannot take all of these changes at face-value, because the types of anemometers (wind speed sensors) changed from traditional cup-and-vane systems, to ultrasonic technology, first in the 2000s, and again in the 2010s. These new sensors are more sensitive and detect higher gusts, so we know they account for some of the change in the data. However, the State Climatology Office has received dozens of inquiries about how windy it's been, mostly from people who do not look at wind data. So in this case, anecdotal evidence and simple human observations help us understand what the data show us even better: We are indeed in a quite gusty period, even if it cannot be quantified perfectly.