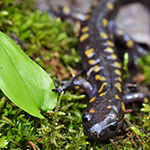 Adult spotted salamander, Ambystoma maculatum, found under a log due to all the recent rain.

Larval salamander showing balancers that drop off soon after hatching.

Spring peepers, Pseudacris crucifer, are often seen and heard during our salamander surveys.