It may surprise many Minnesotans to learn that seven species of salamanders reside in our state. The lives of these secretive amphibians rarely cross paths with our own. In Minnesota, spotted salamanders (Ambystoma maculatum) weren't documented until the spring of 2001 during surveys conducted by the Minnesota Biological Survey. The spotted salamander is a forest species more common in the eastern United States.

This elusive species was documented in Minnesota on April 26, 2001 when seven spotted salamander egg masses were located in a shallow wetland within the Nemadji State Forest.

What is the significance of documenting spotted salamanders in Minnesota? Although rarely encountered, these creatures are a part of our natural heritage and are dependent on our abundant wetlands and diverse forests. Now, their habits and habitat needs can be taken into account during forest management activities. Amphibian populations are declining around the globe and the need for current information on species distribution is great. In the coming years, MBS surveys will work toward learning more about the distribution of Spotted Salamanders in Minnesota.

If you think you've seen spotted salamanders in Minnesota please e-mail Carol Hall with information about the date and location of your observation. Please look closely at the salamander to distinguish it from the tiger salamander. Use this ID sheet  to help. When possible, please include a digital image of the salamander with both dorsal (top) and ventral (bottom) views. 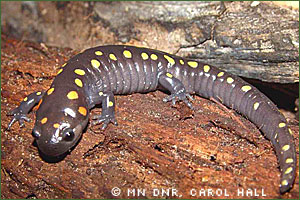 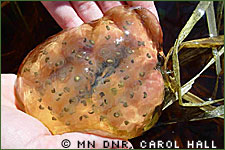 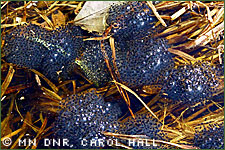 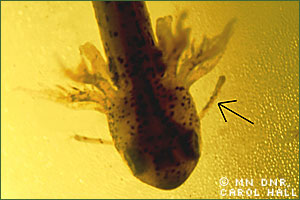